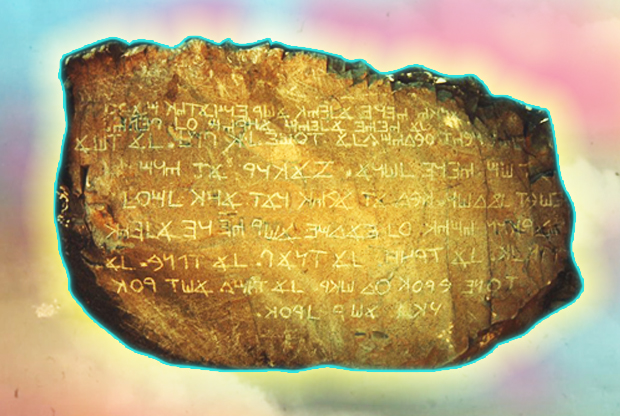 In this post, I have the special pleasure of giving readers of my blog a “sneak preview” of a historical documentary film that is nearing completion and will be released at a later date. The film trailer of this professionally-prepared film is included as the first link. The producer of the film, Dr. David Coatnay, has given me permission to release this trailer to the readers of my blog. The film is entitled, The Mystery Stone, and it deals with the historical evidence that the rather-large inscription of the Ten Commandments in Paleo-Hebrew found at Los Lunas, New Mexico is valid.

The film will feature interviews and “voice overs” from a number of historians, authors and scholars, one of which is me. Dr. Coatnay traveled to my home to get the interview, so you will have a glimpse of my office/library in the trailer. In it, you will see me in two brief video interview clips and hear me on two “voice overs” during scenes from the documentary film. Not all of those interviewed for this film have the same viewpoints regarding how the inscription came to be or when it was inscribed during the ancient history of North America. I think all will agree that this inscription was obviously inscribed in Paleo-Hebrew.

As readers of my books know, I regard the Los Lunas inscription as dating to the time of Kings David and Solomon when the united kingdom of ancient Israel was at its zenith–allied with the city-states of Tyre and Sidon who, together with the Israelites, composed the Phoenician Empire of the ancient world for approximately two and a half centuries. During King Solomon’s reign, the Israelites had a time of vast prosperity and peace and Solomon was so rich that he could fund maritime expeditions all over the world. I Kings 9:26-27, 10:1-27 record this time of global reach and domination by the alliance of the Israelites with Tyre and Sidon. I Kings 9:26-27 and 10:11, 22-24 specifically record that their alliance had combined naval fleets that traveled to other continents to collect rare animals, gems, ivory, etc. One Israelite/Phoenician fleet had voyages so distant that it returned only once every third year. It was during the reign of King Solomon that the Israelite kingdom had the means, motive and opportunity to send fleets that reached many points on the globe, including North America. Paleo-Hebrew, the language of King Solomon’s empire, is the language on the Los Lunas ten Commandants stone. That its inscription preserves and proclaims the Ten Commandments from Bible confirms the inscribers of the stone had to come from a culture which then honored and revered the Ten Commandments. That also would have been the case in the first portion of King Solomon’s reign. My website’s full article on the Los Lunas stone is included as the second link.

The documentary film will include my viewpoints about the Los Lunas stone, but it will present other scholars’ perspectives as well about the origin and dating of the inscription. I ask readers to consider all of them respectfully when the film is released.

When the film has been released, I will notify readers that it is available. I look forward to its release date, and I hope that you do as well. Enjoy the film trailer!