Slovakia Bans Muslim Religion and Mosques in That Nation 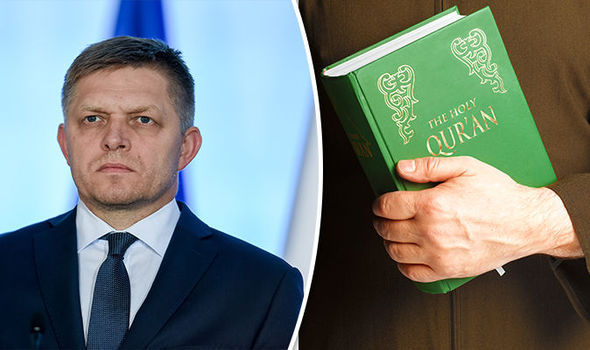 The European nation of Slovakia has just taken a major step to protect itself from any further Islamic immigrants coming to their nation and imposing Islam upon their host nation. That nation’s Parliament passed a bill which ensures that Islam will not be recognized as an official religion within Slovakia. This action prevents the construction of any mosques within Slovakia. The first link and second link offer details on this action. Clearly, Slovakia has taken an action saying: “Muslims are not welcome here.” It is obvious that Slovakia, a small European nation, felt it had no choice but to take this action to protect its sovereignty and culture.

This one more powerful example of individual EU nations taking actions to protect themselves from Islamic immigrants and to revolt against the EU’s bureaucrats. The UK’s Brexit vote has emboldened many other nationalists inside Europe to have their nations ignore the EU’s dictates as they seek to save their nations’ culture and societies from the invasion of Islamic immigrants who have, so far, shown no desire to assimilate into their host nation’s culture.

This action by Slovakia fits well with the subject matter of my previous post, which dealt with the slow-motion break-up of the EU which has been in progress since the UK’s Brexit vote. It also illustrates that the EU is helpless to prevent individual EU nations from going their own way as they defy the wishes of the EU’s bureaucrats. Many European nations can logically see that they have only two choices: (A) obey the EU’s dictates to take an assigned number of the Islamic immigrants pouring into Europe in an unregulated manner and risk the destruction of their nation, or (B) defy the EU’s dictates and save their nation’s culture. Is it any wonder that more nations are taking steps to choose option B of the two options presented above?

Based on the links I’ve reviewed since the tidal wave of Islamic immigrants began entering Europe, the nations that are in the worst internal trouble from allowing too many Islamic immigrants into their nations are Germany, France, Sweden, Belgium and Italy. Greece has received many Islamic immigrants as well, but most of them left Greece and moved northward into Central and Scandinavian Europe. Another wave of Islamic immigrants pouring into Greece and other EU nations could be at hand. Turkey has threatened to dump as many as 3,000 Islamic immigrants per day into Europe via Greece very soon (third link). If this happens, Turkey could take an action which will shatter the EU and could lead to Turkey being expelled from NATO (or to Turkey resigning from NATO). To protect themselves from so many unwanted immigrants, Europe’s nations may have to send naval warships to the Aegean Sea to intercept the migrants and return them to Turkey. If Turkey opens fire on the EU ships returning Islamic immigrants to Islamic Turkey, if could mean a war in Europe and Turkey leaving NATO. This could lead to a pan-European, anti-Islamic fervor that could overthrow globalist EU governments and lead to the destruction of the EU. It may not get this ugly, but the stresses will be immense if Turkey sends Islamic immigrants to a Europe that does not want them. What will Greece do with them if other European nations won’t accept them? Will Turkey’s sending of an invasion of Islamic migrants into Greece be seen as an act of war?

People are wondering how long it will take for the UK to exit the EU via its Brexit process. However, the fourth link opines that the EU itself could self-destruct before the UK’s Brexit process can even be fully implemented. If many European nations refuse to admit additional Islamic migrants (a highly likely outcome for many increasingly-nationalistic nations within the EU), it could lead to more acts of terrorism or crime inside Europe by Islamic migrants already there. This would surely further stimulate anti-Islamic backlashes within European nations.

Nations inside Europe are likely to start preparing for the worst already. One nation already is. Austria has passed a law forbidding illegal immigrants and asylum-seekers inside Austria from owning firearms (fifth link). This action has the effect of making sure Austrian citizens have access to firearms and Islamic immigrants do not. I’d say that Austria is taking precautionary action to prepare for a future crisis which could be unleashed if Turkey essentially declares war on Europe by sending a new tidal wave of illegal Islamic immigrants into European nations. In such a scenario, it is possible the EU could collapse due to its growing internal fractures. Perhaps NATO, as we now know it, will be at risk. If Turkey backs off on its threat to send an invading “army” of Islamic immigrants into Europe, the danger will not be as severe, but the already-building stresses inside the EU could collapse it in time. If readers have not read my previous post on the EU’s growing stresses, I urge them to do so.

As a reminder from that previous post, be sure to watch for the results of the Austrian presidential election this Sunday, December 4th. If the anti-EU, nationalist candidate, Norbert Hofer, wins; it will be one more step toward the disintegration of the EU as we know it. If the EU does disintegrate in the future and the Euro currency is eviscerated or discredited, a major global financial crisis will be inevitable. All who are students of biblical prophecy should be watching these events in Europe to see what kinds of new alliances or currency blocs emerge inside Europe to take the EU’s place.