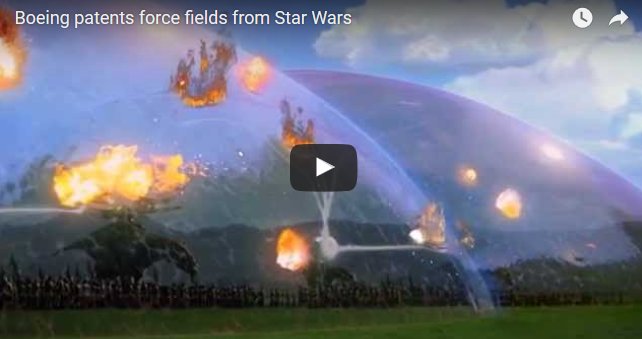 The nature of warfare is changing rapidly, as these links illustrate. The first link briefly describes a new patent sought by the Boeing Corporation that will be an initial form of the Star-Trek defensive “shield” technology that was a staple of that science fiction franchise. It isn’t as capable as the science fiction version of a “shield” yet, but it is making substantial progress in that direction. This form of a defensive “shield” would protect against incoming shock waves, but would reportedly not protect against shrapnel as of yet. Given the rate at which knowledge is exponentially increasing, it may not be long until an electromagnetic “shield” will be created which can protect against incoming shrapnel or explosive charges. The first link has a brief description of the new defensive “shield” invention, and the second link offers a menu of Internet links available for additional perspectives on the topic (many have overlapping content).

The cutting-edge advance of knowledge also applies to offensive weaponry. The final link describes the new laser-weaponry that is expected to be deployed on US warplanes by 2020.

It has long been my view that the actual level of military capability of any given new weapons type is far more advanced than any nation deploying the technology will admit. One never wants to fully reveal the actual state of one’s new weaponry to rival powers as only a fool would give all facts about new weaponry to one’s enemies. Therefore, I think it is safe to assume that the real level of development is much further advanced than is being admitted publicly.

These developments further fulfill biblical prophecies that mankind would experience a huge knowledge explosion in the end times (Daniel 12:1-4,) and that mankind (made in the image of God himself–Genesis 1:26-27) is very inventive in reaching tipping points of knowledge that will result in incredible high-tech societies unless God steps in to stop such developments (Genesis 11:6-7). Daniel 12:1-4 and Matthew 24:37 reveal that it is not God’s will to interrupt the high-tech advancements of mankind in the latter days of our current age, and we are witnessing what happens when God chooses not to stop mankind’s insatiable curiosity about acquiring ever-more knowledge (all too often for evil purposes). How far will this technological advancement proceed? I think a lot further yet. Indeed, I think mankind’s scientific accomplishments, financed via “black” funding projects, would amaze us if we were to know the full extent of what has been invented and deployed. Revelation 13:1-5 hints as much. In that prophecy, it is foretold that when the final “beast” system is unveiled on the earth, the nations will marvel and say, “Who is able to make war with him?” Obviously, that comment indicates the world will be amazed at the military technology that is revealed to the world to subdue it into conformity with the beast system. I think that is when the real extent of invisibility technology, nano-technology weaponry, HAARP technology, plasma ray and field technology, etc, will be revealed openly. When this happens, remind yourself that what the beast will display is as nothing compared to what the Creator God can unleash when he decides to do it. Revelation 19:11-20:4 foretell that God will decide to unleash his Divine array of weaponry against the beast’s forces at the very end of our age. The beast and his forces will quickly perish and their weaponry will be completely useless against God’s power. That’s when you will really see what “Star Wars” technology really is.