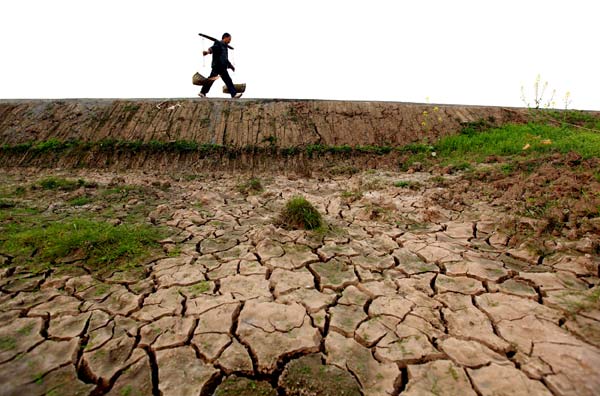 In recent months, I have posted several pieces about the growing mega-drought afflicting the western USA. While I have an update on the growing severity of that drought, this post is mostly intended to give readers a realization of how severe major droughts are affecting China and other parts of the world as well. The drought in China is increasing in severity, and it will eventually harm the global economy, worsen supply chain problems and cause higher inflation as shortages start spreading among various consumer categories.

The first link reports that China’s government is now enforcing extended factory shut-downs in the drought-affected region of China. It states that 16,500 companies have already been affected by the power reductions and shut-downs ordered by Chinese authorities. Toyota, Apple and Foxconn factories are among those being forcibly shuttered due to the power crisis. Parts of China are heavily dependent on hydroelectric power, but that source of power is now greatly reduced by China’s drought. Hydroelectric plants in Sichuan province have reportedly had their power output “halved” due to the severe drought causing shrunken lakes and rivers. It is not known when or if normal power will be restored to the factories shut down due to power shortages. The USA and much of the world import vast quantities of goods from Chinese factories. We should all ask ourselves: “How many of those shuttered 16,500 companies/factories produce goods and materials that we all depend on?” Obviously, if these power-reduction factory closures continue for very long, it will create worsening shortages in the supply chains of all kinds of products and supplies. These shortages will result in more rising inflation as the demand for products will stay the same while the supply of those products gets reduced. If thousands of Chinese factories stay shut down for an extended period of time, supply chain problems and inflationary price increases will globally become more severe.

As an example of how bad the drought in China has become, that nation’s biggest fresh-water lake has lost approximately 75% of its normal size (second link). That link also reports crops are wilting and excavators are being used to try to dig trenches deep enough to bring water from the shrunken lake to water users–but the workers can only work after sunset due to the extreme heat.

The third link adds that power is being reduced and rationed to many factories in the Chinese “mega city of Chongqing.” It cites Tesla as one company having its production cut back, and it lists factories making computer chips, solar panels and auto parts as being affected by power-related shut-downs.  Temperatures of 113 degrees Fahrenheit have been recorded. The drought and heat have caused wildfires, just as has happened in the USA due to heat and drought. China is even resorting to desperate measures to create rainfall, using techniques to hopefully force clouds to drop moisture on the autumn grain crops.

While we Americans are focused so heavily on events in our own nation, we need to be aware that China’s drought is also severe. China has so many more people than the USA and European nations that a worsening drought and resultant crop reductions will have an immense effect inside China. The rationing of power to factories will only get worse in certain regions of China if the drought persists. China produces so many products that large cut-backs in factory production of a wide range of items will cause more inflation as the supply-chains get even tighter. Nations that face severe domestic problems often create foreign confrontations (even wars) to distract domestic populations’ attention away from governmental failures to solve internal problems. If I lived in Taiwan, I’d worry about this possibility happening inside the Chinese government.

In an update on the American drought situation in the southwestern states, the state governments in the region are largely ignoring the worsening water problems and the federal government has done little to compel water conservation measures in the region (fourth link). The link warns of “dire consequences” in the American southwestern states if they continue to avoid decisive action to save water. Some time has been bought for the region by a measure to keep more water in Lake Powell so millions of homes can still have electric power for more months into the future. However, with water reservoirs falling steadily, a “doomsday” date is approaching when taps will not flow with water and no lights will come on when switches are flipped. If that happens, millions of people will turn their wrath on the federal, state and local governments that ignored the problem for too long. A glance at the latest drought monitor map of the USA shows where the spreading mega-drought is getting worse (fifth link). The map indicates the worst drought is in California and Oregon on the West Coast and in a band of states running from Texas northward into Nebraska. Nevada, New Mexico, Utah and Arizona are also in severe drought conditions. With a severe drought this widespread in food-growing regions, food shortages in many food categories are inevitable.

The worsening drought conditions are affecting far more of the globe than just parts of China and the USA. The sixth link lists many nations around the world that are experiencing severe drought conditions with concomitant food shortage problems. It lists much of Europe, the UK, India, parts of Latin America and the Horn of Africa nations as being hit worst by drought conditions. Food experts warn that while some nations face much higher prices for food, people in some nations face real starvation. The link warns that 18,000,000 people in the Horn of Africa alone may soon be at risk of starvation. Please read the sixth link to see which crops are affected in which nations as part of the global crisis involving a shrinking food supply. When masses of people are facing starvation, there will inevitably be uprisings such as wars, civil wars, overthrowing of governments in rebellions, etc. If the droughts continue, this problem will eventually become a global crisis for many nations.

The Bible warns that starvation, food shortages and rising food costs will characterize a prophetic time known as the “latter days” which will be the final years of mankind’s divinely-allotted time to misrule itself before Jesus Christ comes at the head of a heavenly army to forcibly impose a Millennium/Messianic Age of peace and plenty on the world (Revelation 19:11-20:4). Matthew 24:5-8’s prophecy include famines, wars and natural disasters as rising in intensity during this time. Please read my article, Are We Living in the Biblical Latter Days?, for abundant evidence that we are truly living in this prophesied, latter-day time period. Biblical prophecies are coming to pass in our time with great specificity, and you need to know what is coming in the future according to the biblical prophecies. As food shortages loom globally, you should take some practical preparatory steps to ensure that the needs of you and your family are met in the future. Complete safety and protection can only be found in the care of our Creator God, but God expects us to do some things for ourselves. I have outlined some of those steps in my article, Should Christians Prepare for Future Hard Times? The short answer is: Yes, they should —and so should everyone regardless of one’s belief systems. The time to prepare is running out…just like the water supplies in the American Southwest and many parts of the world.