SECOND-WORST EBOLA OUTBREAK IN HISTORY RAGING IN THE CONGO 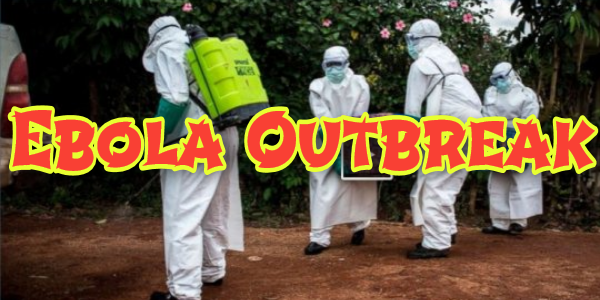 A deadly event is occurring in the Democratic Republic of the Congo (DRC), but there has been only limited media coverage of this event. In the DRC, the “second worst” outbreak of the Ebola plague in recorded history is now raging in a relatively remote part of the nation. As of late March, over 1,000 cases of Ebola had been confirmed and there had been 629 deaths, resulting in a lethality rate of at least 60% (first link). The link also reports that the World Health Organization (WHO) has stated that “the risk of national and regional spread remains ‘very high.'” One reason for that risk is the Ebola outbreak has occurred in an active war zone (also in the first link). Highlighting the reality of the local armed conflict in the Ebola-affected region, a group of declared ISIS-affiliated attackers raided an Ebola Treatment Center, resulting in the deaths of one WHO doctor and one of the attackers (second link and third link). The April date of these later links shows the death toll from the Ebola outbreak was then nearing 850.  Given that these attacks and battles in the affected region of the DRC are so close to the Ugandan border, it is inevitable that people fleeing the violence will relocate into Uganda. One cannot help but wonder how many people fleeing the infected war-zone area are already carrying the Ebola virus into neighboring provinces and/or nations.

The fourth link has a useful chart showing the steady rise in the number of confirmed cases of Ebola in the affected region; however, readers are urged to notice that the statistical totals are two weeks behind the present so the number of cases and fatalities are higher than the chart indicates. The fourth link relates a very puzzling fact: that the WHO has so far refused to issue a global health alert about the Ebola outbreak. It also reports that the WHO has declined to issue such an alert “despite a sharp uptick in the number and geographical spread of cases of the Ebola virus…”

I cannot understand the nonchalant response by the WHO to this Ebola outbreak–which is admittedly the second-worst outbreak of the Ebola virus in recorded history. There are obviously people entering and leaving the infected region. The WHO’s own staff, possible UN staffers and the personnel of various NGOs who enter the region are all possible carriers when they leave the infected zone. Could this Ebola virus travel on their luggage or only in human hosts? If ISIS has, indeed, aided local fighters in the war-torn area where the Ebola plague is spreading, then ISIS organizers and arms-smugglers of all kinds must be supplying weaponry to the various factions involved in that region’s fighting. ISIS terrorist-organizers or the representatives of international arms-merchants could also easily spread the virus via travel on airplanes, railroads, etc. when they leave the infected zone. I’ve seen reports that the WHO has not yet declared a global health warning about this Ebola outbreak because it has not yet confirmed that this Ebola strain has spread to a second nation. I would observe that by the time it is confirmed that the Ebola virus has traveled to other nations, it will already be too late in the process to contain the outbreak to its current region. At the very least, all nations should be warned about this outbreak and travelers arriving at airports, rail stations, etc. need to be asked if they have traveled in or near the Ebola outbreak zone so such people can be quarantined for a time to be sure they are safe to release into the general population. Refusing to issue a global health warning about such a dangerous plague has not yet been confirmed in a second nation is tantamount to a refusal to call the local fire department until a fire has spread to more than one floor in a building.

As I’m sure readers realize, the Ebola virus has various strains and some are more virulent than others. It can also mutate and take on different characteristics. It would seem that extra cautionary measures are needed to keep this Ebola outbreak contained. If this Ebola outbreak spreads more widely, the WHO will be at least partly responsible due to its sluggish response to this Ebola outbreak. One can never predict how severe an Ebola outbreak will be as it sometimes is so virulent that it kills its human hosts before it has much of a chance to spread. I’m certainly not going to predict the course of this Ebola outbreak, but it is already large enough that, in my opinion, the world’s health authorities should be formally alerted so they can take preventive actions.

This news does remind me of a biblical prophecy that applies to the latter days of our age. Matthew 24:3-13 warns that during the time just prior to the return of Jesus Christ that a number of global traumas will occur. Wars, earthquakes, generalized violence, famines, etc. are cited as some of the global traumas that will be present in the latter days. Obviously, these phenomena will predictably be occurring in greater frequency and intensity during the latter days. Verse 7 also cites “pestilences” as one of the global traumas that will characterize the latter days. This term is general enough to include all kinds of disease outbreaks. Hemorrhagic plagues like Ebola are some of the most frightening and lethal diseases known to mankind. There are many other diseases that also qualify as “pestilences.” We do not know when a known or new disease/pestilence will make a widespread outbreak in the general populations of multiple nations. The Spanish flu spread widely during the early 20th century and killed millions all over the globe. At some point, Matthew 24:7 indicates it is inevitable that serious global pestilences will infect mankind. For the time being, it is at the very least a wise course of action to stay far away from regions where known lethal plagues are already spreading. For clear evidence that we are, indeed, living in the biblically-prophesied latter days, please read my article, Are We Living in the Biblical Latter Days? When you examine the biblical prophecies about the latter days and realize that these prophecies were written millennia ago, it becomes obvious that only a Divine Creator God could have inspired such prophecies and bring them to pass on his pre-planned timetable. Isaiah 41:21-26 and 46:9-11 contain God’s challenge to mankind to look at his ability to bring to pass his biblical prophecies as proof of his reality and sovereignty. I urge readers to take God’s challenge and read my aforementioned article to see irrefutable evidence that the Bible’s ancient prophecies are being fulfilled in the modern world–sometimes with incredible specificity.

I want to thank a reader for drawing my attention to this story.