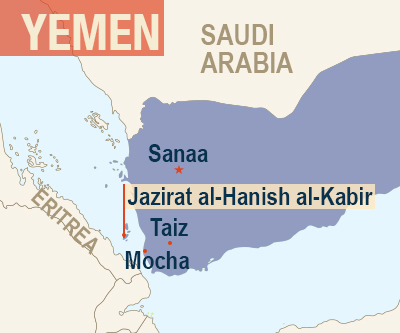 An important event has occurred in the Mideast which has attracted almost no media attention in the West. The joint military forces of Saudi Arabia, Egypt and the UAE assaulted and seized an Iranian-controlled island in the southern part of the Red Sea (link). As readers surely realize, the Saudis have been fighting the Iranian-backed Houthis inside Yemen for months. Their effort has made progress, but the progress has been slow. The link below offers a reason for why the Houthis have done as well as they have in that war. Iran had established a sizable military base on an island in the southern Red Sea, from which they were re-supplying the Houthis with weaponry and support. The Saudi-Egyptian-UAE invasion of the island has taken away much of Iran’s ability to resupply the Houthis.

The Iranian-controlled island not only was a military base for resupplying the Houthis, but it also had “advanced radio and electronic tracking stations” located there. Obviously, Iran could maintain close contact with the Houthis about their military needs via those facilities. I’m sure the Saudis, Egyptians and UAE technical experts, aided by other allied powers, are pouring over everything the Iranians had on the island to determine more facts about the state of Iran’s military resources and the extent to which they are being supported by Russia and China.

The participation of Egyptian forces to help wrest the island from the Iranians is important and entirely logical. The Egyptians realize that Iran is trying to position its forces to be able to shut down the southern approaches and exists to the Suez Canal in the event of a Sunni-Shiite war. That would be a major threat not only to the Egyptian economy but also to its national security. Perhaps the war in Yemen will go more favorably for Saudi Arabia now that Iran can no longer support the Houthis via its former island base.

The need to seize this island was made all the more urgent by the link’s reporting that Iran has also gained permission from the small nation of Djibouti to establish an Iranian base there. That will allow Iran to have a new base at the southern approaches and exits to the Suez Canal from which to threaten Egypt, Saudi Arabia and the Sunni nations in the region. This must be seen as a supplemental action to China’s establishment of a base in Djibouti, which I discussed in a recent post. The USA also has a base in Djibouti, but the establishment of Chinese and Iranian bases there is happening right under Obama’s nose. Maybe Obama is too busy golfing somewhere to pay attention to important events that are happening in the real world. What is happening in Djibouti certainly makes Obama look exceptionally weak in the eyes of all nations following these events.

The major global powers are jockeying for positions of strength to prepare favorable strategic positions for the next major war. The Gog-Magog alliance (prophesied in Ezekiel 38:2-6 to come into existence in the latter days of our age) suffered a setback when Iran lost control of the key island base in the southern Red Sea to the Sunni forces of Saudi Arabia, Egypt and the UAE. There is no report that the USA or any NATO nation contributed any support to Saudi Arabia, Egypt and the UAE in their seizure of this island base. I do wonder if the Mideastern Sunni nations, seeing the tilt of the Obama administration toward Iran and the Shiites, kept the USA “out of the loop” about this military invasion so no one in the Obama chain-of-command could tip off the Iranians that it was coming. I also wonder if the Israelis, just as threatened by Iran as the Sunni nations, was a “silent partner” to the Sunnis in this action in some helpful ways.