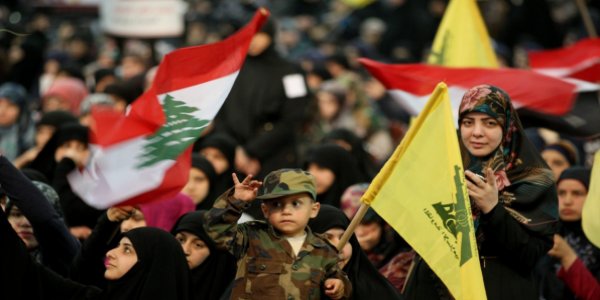 The Mideast just got more dangerous and the Sunni-Shiite confrontation just got escalated. The Sunni nations of Saudi Arabia and its Sunni allies in the Gulf Cooperation Council have formally declared the Shiite-dominated Hezbollah organization to be a terrorist organization. This will have several major repercussions.

The first link and second link detail this story. Led by Saudi Arabia, a Sunni alliance has openly declared its opposition to Hezbollah, a proxy of Shiite Iran. The declaration against Hezbollah is also a major slap at Iran, as the second link notes. The Saudis have canceled a multi-billion aid program for Lebanon because it is so dominated by Hezbollah, and Sunni nations are also issuing travel warnings about going to Lebanon. The second link states that this action “dangerously escalates tensions between regional rivals Saudi Arabia and Iran.” That observation is very accurate. A regional war has already started in two proxy battlefields between the Sunnis and Shiites. Yemen has a war with the Saudis slowly repelling the Iranian-backed Houthis and the Saudis have been helped by Sunni Egypt. In Syria, it is a crazy quilt of entities fighting each other. The Assad government is backed by Russia, Hezbollah and Iran. Opposing them is a fractious group. It includes the extreme Islamic terrorist army of ISIS, a Turkish-backed Sunni militia, a Sunni Kurdish force which is hated (and even bombed) by Turkey, a Saudi-backed militia, an Al-Queda-backed force and perhaps a few here and there that may be supported by the USA. With two proxy wars raging, the Saudi/Sunni declaration re: Hezbollah definitely raises the stakes of a wider confrontation as it de-legitimizes Hezbollah, an Assad supporter, in the eyes of the Sunni world. The Syrian conflict has a shaky cease-fire right now, but not all the forces inside Syria signed on to it and they are still fighting. It is not clear if the cease-fire will hold or if the competing sides are just taking a “time out” to consolidate their forces.

In an extra twist to this confusing situation, there is an almost-entirely unreported Christian militia that is fighting in behalf of the Assad regime (third link). This pro-Assad Syrian Christian militia with 1000 armed men has fought as allies of the Kurdish Sunni forces. This is a largely untold story in the mainstream media. It seems to me that the Kurdish forces want to defeat ISIS and have a Kurdish state of their own in northern Iraq and Syria. Such a Kurdish state, if there is a redrawing of borders in Iraq and Syria, could likely live in peace with the Assad regime–an outcome unacceptable to Turkey, Saudi Arabia and other nations. The Christian fighters could surely live in peace with the Assad regime. Why are the Christians in Syria fighting for Assad? The answer is simple. Assad has long supported religious freedom for Christians in Syria. The fourth link indicates that this was noted by Christianity Today as far back as 2011 when the Syrian civil war was just beginning. The final link from 2015 confirms that Assad is the only real protector of Christian freedoms in the Syrian conflict. The fact that the Assad regime is the only Syrian side which protects Christians has been suppressed by the Obama administration and the western media because it does not fit their narrative that “Assad has to go.” Almost assuredly, Christians in Syria are welcoming the Russian intervention which props up their only protector! This fact confirms that just when you think you have the Mideast figured out, it gets even more complex in terms of its alliances.

There is one other aspect of the Saudi/Sunni declaration of Hezbollah as a terrorist organization that is not being discussed in any media that I know of besides this blog. Most significantly, Saudi Arabia and its Sunni allies have just joined the formal Israeli position regarding Hezbollah–that it is a gang of terrorists. That the Saudi/Sunni alliance has now taken the same position as the Israelis re: Hezbollah paves the way for closer de-facto cooperation by the Sunni nations with the Israelis and hastens the day when the Saudis and Sunnis reach the point where an open alliance with Israel will become a reality. It must come into existence for the Israelis and Saudi-led Sunni nations very much need each other to be able to oppose Iran and its proxies together. This blog has been following the developing Saudi/Sunni alliance for years, and it is becoming a reality before our eyes.

The bottom line biblically is that Mideast developments are aligning nations precisely with what was prophesied in Ezekiel 38 almost 2500 years ago. The prophecy about latter-day alliances names none of the modern nations descended from Abraham as being in the Gog-Magog alliance. Because the Israelis are descended from Abraham via Isaac and Jacob/Israel and the Sunni Arabs are descended from Abraham via Ishmael, they are actually blood relatives that are steadily allying with each other vs. Iran. In doing so, the prophecy of Ezekiel 38:1-6 is proving “right on target.” That a prophecy about latter-day nations is being so precisely fulfilled in our time confirms that the Creator God who inspired the Holy Bible is controlling and guiding current national destinies to make sure his prophecies get fulfilled (as Isaiah 41:21-26 said he would). This also proves the Holy Bible is the inspired Word of the Creator, and that we are living in the latter days. For more evidence that we are living in the biblically-prophesied latter days, please read my article, Are We Living in the Biblical Latter Days?