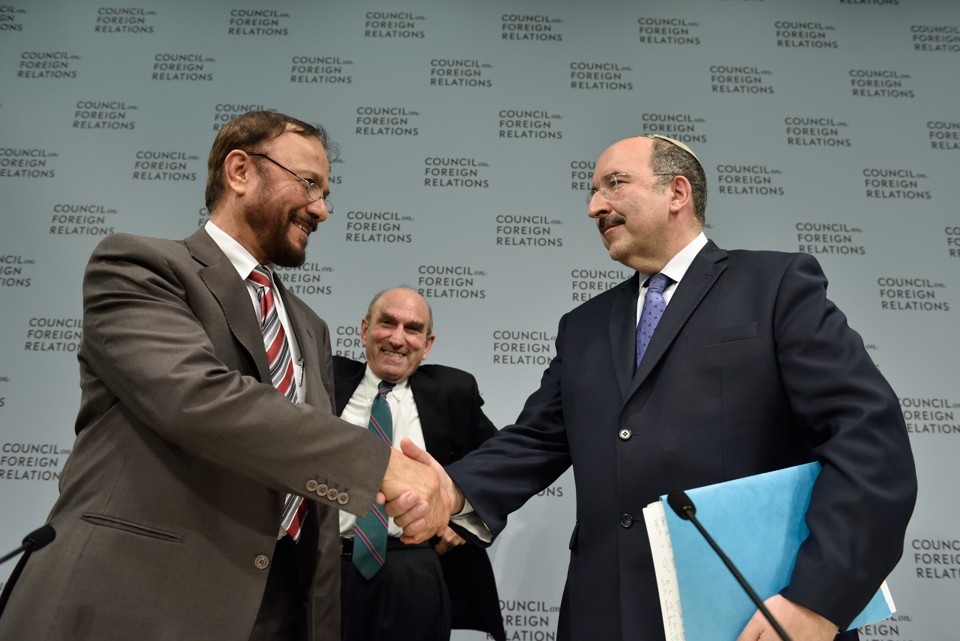 This post is to offer readers evidence that the military/political ties between Israel and the Sunni nations such as Saudi Arabia and Jordan are steadily growing stronger. The first link notes that the Saudi Arabians, feeling “jilted” by the Obama administration via the dangerous treaty the US and other western powers have negotiated with Iran, are creating a stronger, unified Sunni Arab military force to act in mutual defense against Iran. However, the Saudi actions go much further than merely uniting Sunni nations together against Iran. The second and third links document that the Saudi-Israeli ties are strengthening due to the heightened and growing dangers posed to both nations due to the nuclear deal which will surely increase Iran’s power in the Mideast region.

The second link observes that Obama’s new nuclear deal with the Iranians is “wholly antithetical to the interests of the entire Sunni Arab world.” This is a very strong assertion, and I entirely concur with it. The third link has a picture which is “worth a thousand words.” It shows how warm the Saudi-Israeli relationship is now becoming. Notice the warm handshake and greeting between Dore Gold, the former Israeli Ambassador to the UN and former Saudi General, Anwar Eshki. This photograph speaks volumes about the convergence of Israeli and Saudi interests in joining together to face the common threat posed by Iran. Dore Gold is also reportedly about to assume a very important position in the Israeli government of Benjamin Netanyahu so this Saudi-Israeli convergence is surely in favor with the current Israeli government.

The fourth link confirms that military ties between Israel and Jordan are growing closer than ever before. The main theme of the link is that Israel is now selling advanced military drone technology to the Jordanian military (so Jordan can monitor ISIS forces in the region which are near to Jordan). It is remarkable by itself that Israel is selling weaponry to Sunni Arab nations, but the link includes another piece of information that I thought was particularly striking. It reports that an Israeli aerial refueling tanker was seen flying while being escorted by four Jordanian warplanes as they flew to the US for aerial exercises. That this indicates the Israelis are doubtlessly practicing how to conduct aerial refueling exercises with Jordanian warplanes speaks volumes about how close the Israeli-Jordanian military relationship has become. While not noted in the links, previous posts have reported that Egypt and Israel are acting as mutual allies is opposing the radical Jihadists who are killing and attacking Egyptian military posts and police facilities in the Sinai peninsula.

This accelerating cooperation between Israel, Saudi Arabia, Jordan and Egypt (and likely other Sunni Arab nations as well) is being driven by the foolish treaty that the Obama administration has negotiated with Iran. That agreement seems slanted to favor Iran and appears to be a surrender by Obama and the West the more one learns about it. As an example of how bad this agreement really is, the news has broken that the agreement permits Iran to self-inspect its own facilities to ensure treaty compliance (last link). This is like allowing the foxes to guard the chicken-houses. How could any American government negotiate such a bizarre agreement which surrenders the security interests of the USA, the West, Israel and the Sunni nations?

If this agreement is approved by a gutless US Congress, I expect the convergence of Israeli, Saudi, Jordanian, Egyptian and other Sunni nations’ interests to blossom further into an open alliance before too much more time passes. Such an outcome would be entirely consistent with the prophecy of Ezekiel 38-39 as none of these nations are prophesied to be a part of the Gog-Magog alliance which will include Russia, China and Iran. The Israelis are “Judah” in biblical terminology while Egypt is still Egypt in biblical terms. The Sunni Arab nations are referred to as Ishmaelites in Bible narratives. Since none of them are listed in Ezekiel 38:2-6 as being part of the latter-day Gog-Magog alliance, current events are pushing these nations together very strongly away from the Gog-Magog alliance, and in so doing, fulfilling the will of God as revealed in the Ezekiel 38 prophecy.