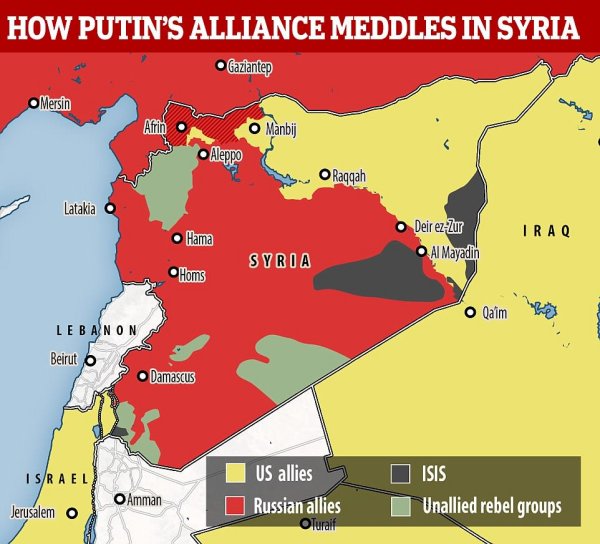 Events are occurring in the Mideast which herald a major shifting of traditional alliances in the Mideast. In a further sign that Turkey is hastening its exit from NATO, it formed a three-way entente with Russia and Iran to coordinate their actions in shaping the new political lines in the post-ISIS Mideast (first link). Qatar is also often associated with Turkey and Iran as an ally in the new Mideast arrangements. Since Turkey is buying a sophisticated Russian air-defense system built by the Russians to mainly shoot down NATO warplanes, it seems inevitable that Turkey and NATO are heading for an inevitable split unless there is regime change in Turkey. That seems highly unlikely as Turkish leader Erdogan has been purging all Turkish institutions of his opponents.

The above emerging alliance is being countered by another growing alliance. The Crown Prince of Saudi Arabia “unofficially” recognized the state of Israel in a US visit by stating  he has “no problem with the state of Israel…as the nation state of the Jewish people” (second link). Since the Palestinians chose to identify with Iran months ago, the Saudis and other Sunni nations like Egypt and Jordan have every reason to downgrade their interest in Palestinian statehood issues. Those who have read my posts in recent years will not be surprised at all by this development as it is consistent with the warming Israeli-Sunni Arab cooperation on military and intelligence matters that I have written about for years. The growing cooperation between Saudi Arabia and Israel (dare we call it an “alliance”?) has enraged Iran which did not want to see its two main Mideast rivals become allies against Iran and its proxies (Hezbollah, Syria, the Yemeni Houthis, etc.)–see third link.

Naturally, the Mideast has many confusing cross-currents in its shifting political allegiances. Not long ago, the Kurds held a referendum that had the Kurds voting for an independent Kurdistan. This angered the central government of Iraq which sent its military forces to push the military arm of the Kurds–the Peshmerga– back to their autonomous region in northern Iraq. Iraq’s central government is also dominated by Shiites, which are aligned with Iran. However, then Turkey invaded the Kurdish northern region of Syria near the city of Afrin and announced that they intended to drive ever-further eastward through Syria into Kurdish regions in northwestern Iraq. The Iraqi government is jealous of its territory and does not want Turkish troops anywhere inside Iraq’s borders. This has led to the Iraqi central government attempting to reconcile with the Kurdish forces in Northern Iraq (fourth link). While the fourth link’s story cites a desire to cooperate against the last remnants of ISIS, I think the real reason for this reconciliation between the Iraqi central government and the Kurds in its northern autonomous zone is a strong mutual desire to resist the Turks if they attempt to encroach into Iraq. They are not the only entities that want to stop the Turkish probe into northern Syria and Iraq. The fifth link and sixth link relate that France is sending troops into the Kurdish zone in northern Syria to try to assist the Kurds in halting further Turkish advances. The sixth link reports that France has sent troops and warplanes to join US military forces in a critically-important region of northern Syria directly in the path of the Turkish invasion. This has enraged the Turkish leader (seventh link), who seems to have a personal goal of seizing as much of the territory of the old Ottoman Empire as he can. The USA has warned Turkey of the consequences of Turkey attacking US forces in this region, but Turkey seems unwilling to listen to reason so there is a possibility that Turkey, a NATO nation, may attack the military forces of two other NATO nations, the USA and France, inside northern Syria. Let us hope that such a perilous situation does not occur.

Israel is watching all this with a very careful eye. Reportedly, Israel is now helping seven Sunni militia forces inside Syria near its border with Syria (eighth link). Presumably, these Sunni militias are also supported by Sunni Saudi Arabia, so this action solidifies Saudi-Israeli cooperation. Also solidifying Israeli-Sunni relations is the fact that Israeli warplanes jointly exercised with the warplanes of the United Arab Emirates (UAE), a key Saudi ally, in a recent aerial war game in Greece (ninth link).

Even more importantly, the USA is taking two major actions which indicate that it realizes that Turkey is becoming a “turncoat” to NATO. The final link reports that the USA is moving its considerable air assets and military personnel from its large base in Incirlik, Turkey to new locations in Eastern Europe and Greece. It also is reportedly moving its major Mideast air force base in Qatar (which is drifting into the orbit of Iran and Turkey) to a new base in Saudi Arabia. This will greatly increase the security of the Saudi kingdom as it will have the USA’s forces inside its territory protecting it from Iran and Turkey. Since Turkey and Qatar are no longer reliable allies, it is wise for the USA to take these actions. This will solidify the American-Saudi alliance.

As you can see from the information in these links, major shifts are occurring that are not being discussed in the mainstream media. One coalescing alliance includes Russia, Iran, Turkey, Syria, Qatar and all of Iran’s Mideast proxies. The other alliance includes the USA, Saudi Arabia, Israel, France, Jordan, Egypt, the UAE and other Sunni governments. The Iraqi central government and the Kurds are uneasily caught in the middle for now.

What we are seeing is entirely consistent with the key biblical prophecy in Ezekiel 38-39 which lists the nations that will compose the two major global alliances in the latter days. To see how accurately the Bible’s prophecy foretold the memberships of the two global Eastern and Western alliances, please read my free article, What Ezekiel 38-39 Reveal about a Future World War III . Since the Israelis were discussed above, please also read my article, Four Reasons the Jews are Judah. It is evident that what we are watching unfold in the Mideast is the jockeying for position by these two rival alliances identified 2500 years ago in the biblical book of Ezekiel.

The Mideast seems to be heading for an explosion. Unless something happens to defuse the crisis (i.e. Turkey withdrawing its invasion force back into Turkey), war seems increasingly inevitable. Such a war need not be the final global world war prophesied in Ezekiel 38-39, but it could easily be a major regional war between these two great alliances which is fought in the volatile Mideast.