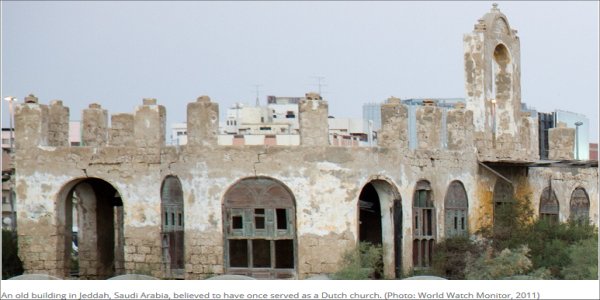 In what is a remarkable illustration of how things are changing rapidly within Saudi Arabia, the Saudi government is restoring a 900 year-old Christian church within the kingdom. It was a “gift” to the visiting Patriarch of the Lebanese Maronite Christian Church, who visited the Saudi kingdom recently. It also marked the first time the Saudis have invited the head of a Christian denomination for an official visit to Saudi Arabia (details and photos of the visit in the two links below).

While Saudi Arabia is not yet allowing Christians to practice their faith openly in Saudi Arabia, that would be the next logical step. It would make utter sense for the Saudis to allow, for example, US military personnel to openly practice their faith in Saudi Arabia since they are there to defend the Saudi kingdom and Saudi royals from Iran. US and foreign diplomats surely include not only Christians but diplomatic staff of a variety of faiths. The fact that the Saudis have taken this first step in a rapprochement with Christianity is a very good sign. There used to be a phrase, “the people of the Book,” which I have not heard in decades. It referred to the fact that Christians, Jews and Muslims all acknowledge and worship the God of Abraham. It was a very inclusive term, and I hope that this becomes a new political reality between these three major religions.

Warming relations between Saudis and Christians further indicates that the Sunni Arab Muslims (who are descended from Ishmael, the son of Abraham via Hagar) will be in the major world alliance headed by the nations of the house of Israel (Israel was Jacob’s name after God changed it and the USA, the UK and many European and Scandinavian nations as well as Australia and New Zealand are descended from Jacob, Abraham’s grandson via Isaac). The tribe of Judah in the modern world are the Jews/Israelis (Judah was one of the twelve sons of Jacob and Judah was the great grandson of Abraham via Isaac and Jacob). These connections between modern nations and the ancient nations and peoples of the Bible are firmly documented via both biblical and secular historical evidence in my books, which are available at the homepage of this website. As a taste of what is in the books, click on the link under the cover photo of the books at my home page and you will be able to read a significant portion of the book’s text for free. To see an advance sampling of the evidence of the USA’s prophetic and actual identity as the modern tribe of Manasseh, please read my article, The USA in Bible Prophecy.

This remarkable thaw between the Saudis and the world’s Christian community is a very good sign, indeed. It is a small step, but a very important signal about where the Saudi kingdom is going in the future. It does appear that the Sunni Muslims are steadily drawing closer to the Israelis and the USA, NATO and their allies around the world.

God prophesied and revealed in Ezekiel 38-39 how these alliances would be formed in our latter day period of time. That this 2,500 year-old prophecy is coming to pass before our eyes is proof that the Bible really is the inspired word of the Creator God who made us all. Only an all-powerful Creator could give a prophecy to Ezekiel 2,500 years ago and make it come true in our age. His ability to fulfill prophecies is something God declares is an evidence of his reality and sovereignty (Isaiah 41:21-26 and 46:9-11). We are truly living in the climactic latter years of this age. The many prophecies contained in Ezekiel 38-39 about our modern time are detailed in my article, What Ezekiel 38-39 Reveals about a Future World War III. For proof that we are living in the latter days, please read my article, Are We Living in the Biblical Latter Days?

The Saudi action is very much worth noting, and it would have been unthinkable not many years ago. I’m sure the public nature of this diplomatic meeting between the Saudi government and the head of a Christian denomination was seen by all Sunni nations as a signal of where the Sunni nations need to go in the future. Whereas ex-President Obama clearly tilted toward the Shiite, Persian Iranians, President Trump clearly intends to be a strong and faithful ally to the Sunni Muslim nations and his administration favors open diplomatic relations between Saudi Arabia and Israel as part of a new Mideast accord.

We certainly live in interesting times!