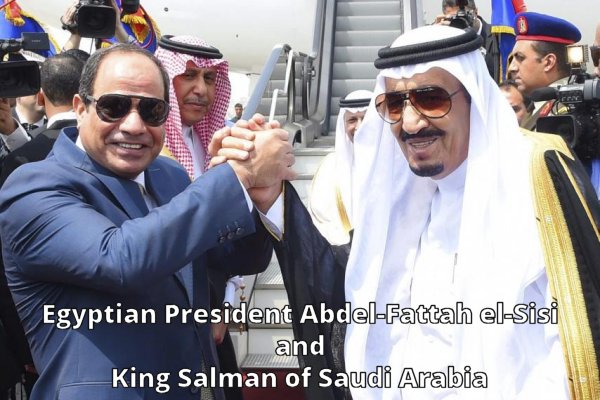 Saudi Arabian leaders have, I believe, signaled that they have decided to go in a new direction to preserve their kingdom. Recent actions indicate where the Saudis are headed.

Most informative was their “reception” for US President Obama when he landed in Saudi Arabia for a recent state visit (first link). To say his reception was chilly is an understatement. Obama was conspicuously “snubbed” as the first link reports. The Saudi action was no accident. They were making their displeasure with Obama known not just to the American government, but to the world in general. I think it is safe to say the American public will not be told that their president is held in such low regard internationally by important allies…who are well on the way to being “former allies.” The Saudis (as well as many Sunni nations and the Israelis) are undoubtedly still fuming at the agreement Obama made with the Shiite Iranians–as that agreement was tantamount to a surrender of American, Israeli, Saudi and Sunni interests to the Iranians.

The second link illustrates a striking new tactic by the Saudi government. A Saudi television commentator openly acknowledged that some of the world’s terrorists “adhere to the religion of Islam.” That is quite an admission, given the Wahhabi form of Islam that is dominant in the Saudi nation, and it represents a signal to the world (at least to the part that was listening) that the Saudis now openly realize and admit that Islamic terrorism exists and is a risk to the world. I doubt this Saudi TV commentator would have been allowed to make such an admission on television unless it had been first approved by Saudi government censors. This makes the Saudis more honest than Obama, who still can’t seem to use the phrase “Islamic terrorists” in his vocabulary.

As readers know, the Saudis and several allies are already fighting one proxy war with Iran (the conflict with the Shiite Houthis in Yemen). I believe it is evident that they can no longer regard the USA as a reliable ally as long as Obama is president. The Saudis are making strong overtures to the Israelis as a de facto ally, as are the Egyptians and members of the Gulf Cooperation Council (as my posts have documented). The Saudis also realize that they must have some strategic depth in any war with Iran. I believe that they have just made a step in that direction. The third link reports that the Saudis and Egyptians are going to cooperate in building a bridge between their two nations across the Red Sea. Both nations are Sunni allies against Iran. I’ll bet that bridge will be used by more than just commercial and tourist travel. I think it will be built strong enough to transport tanks and military armored vehicles directly from Egypt into Saudi Arabia to allow Egyptian forces to quickly reinforce the Sunni Saudis in any war against Shiite Iran.

Oh, one more thing. The US Congress is considering passing a bill that could allow US citizens to sue the Saudi government for damages relating to the 9/11 terrorist attack on the USA. This means both the Executive and Legislative branches of the US government are driving the Saudis away from being US allies. The Saudis have noticed. While the Saudis are no democracy and do not share a lot of American ideals, they have been staunch US allies for decades. If the US Congress passes this bill, the Saudis have threatened to retaliate by selling off $750,000,000,000 ($750 Billion) in US assets that are now owned by the Saudis (fourth link). Presumably, the main item to be sold off would be US Treasury bonds. This action could cause the US dollar to plummet. The Saudis could also end the US Petrodollar market by declaring they will accept a variety of international currencies and gold as well as US dollars in payment for their oil.

I think it is safe to say that relations between the USA and the Saudis have never been worse. As they look about for new allies, the Saudis realize that they must have a reliable, nuclear-armed ally with strong conventional forces to deter Iranian aggression–or to defeat the Iranians if a war does break out. I’ve done a number of posts about the developing Saudi and Sunni-Israeli alliance which is forming to counter the Iranian threat. One thing is certain. The Saudis know beyond any shadow of a doubt that the Israelis will be a staunch ally vs. Shiite Iran in any confrontation, and that is exactly what the Saudis and other Sunni nations need. The mainstream media is even beginning to notice the warming of relations between the Saudis and the Israelis (fifth link). The Saudis, Israelis, Egyptians and other Sunni nations are all being pushed together into an alliance by the oldest of national imperatives: survival. In the Mideast it is best expressed by the axiom: “The enemy of my enemy is my friend.” The Saudis, the Israelis, the Egyptians and other Sunni nations all realize they have a common enemy: Iran. Obama’s surrender to the Iranians will greatly increase Iranian national military and economic power, making them an even greater threat. One unintended consequence of Obama’s surrender to the Iranians is that the growing alliance between the Saudis, the Egyptians, the Israelis and other Sunni nations is gaining steam.

These events are all consistent with the prophecy of Ezekiel 38 which revealed 2,500 years ago how modern nations would align themselves into rival alliances in what the Bible calls the “latter days” (Ezekiel 38:8 and 16), as readers of my articles and blog already know. How could the Bible have a prophecy which so accurately predicted the global alliances of our time? There is only one explanation. This could only happen as a result of a Divine immortal Creator Being giving the prophecy to Ezekiel circa 2500 years ago and then bringing it to pass in our time–accurately and on schedule.