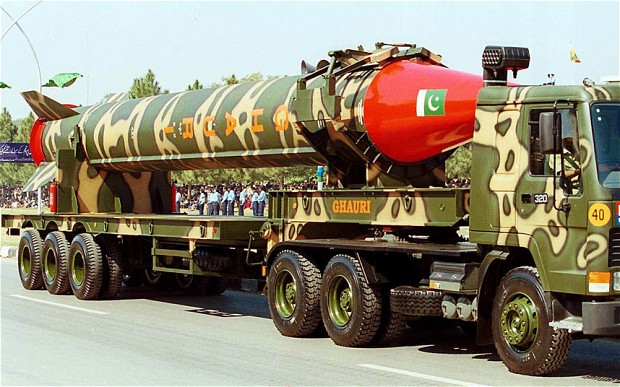 The near-capitulation by the Obama administration to Iran in the nuclear “deal” made by the USA with Iran is generating ominous consequences. It appears likely that Saudi Arabia is nearing a decision to acquire some nuclear weapons from Pakistan and become a nuclear power even before Iran becomes one. Given Iran’s threats against other nations, its support of terrorists and its support of the Shiite Houthi rebellion in Yemen (on the Saudi border), Saudi Arabia has justified reasons to fear an Iran which can obtain nuclear weaponry. Given Iran’s bellicosity and its militarization programs, Saudi Arabia has every reason to feel the need to possess some nuclear weapons to deter Iran from using its nuclear weapons as soon as Iran has them.

These two links [first, second] examine reports that the Saudis are moving close to a decision to take delivery of an unspecified number of nuclear warheads from Pakistan. In my past posts on this subject, I have cited media reports of an agreement between Saudi Arabia and Pakistan in which the Saudis funded much of Pakistan’s nuclear program and, in return, were promised delivery of a number of nuclear bombs from Pakistan whenever the Saudis felt the need to take delivery of them. I personally believe such an agreement exists, and the second link discusses this agreement. Would Saudi Arabia have funded much of Pakistan’s nuclear program and expected nothing in return? I doubt it very much. Also, Pakistan is a Sunni-dominated Islamic nation and, therefore, shares a common interest with Saudi Arabia is stopping the advance of Shiite Islamic nations and movements.

The second link has some very interesting facts to consider which affirm Saudi Arabia’s determination to successfully resist Shiite Iran in the Mideast. Saudi Arabia now spends more money on defense than does the United Kingdom and it has reportedly committed twice as many Saudi soldiers (150,000) to the Yemeni campaign than exist in the entire British army! [This is also a commentary on how badly the British military forces have withered in recent years.] I suspect that Saudi Arabia is rotating its soldiers and airmen into Yemen in those overall numbers rather than having that many there at once. One advantage of having so many of its soldiers and airmen fight in Yemen is that Saudi Arabia is enabling many of its military personnel to gain combat experience. That will obviously help the Saudi forces in the event of a wider war against the Shiites developing in the Mideast region.

As more developments occur in the Mideast, it supports my view that based on Ezekiel 38 Shiite Iran will be firmly allied with Russia and China in the Gog-Magog alliance and that the Sunni Islamic nations, headed by Saudi Arabia and Egypt, will mostly be arrayed against the Gog-Magog alliance.

My thanks to a friend for giving me a “heads up” on these links!