Saudi Arabia Forms a 34-Nation Alliance Vs. Terrorism… or Vs. Iran? 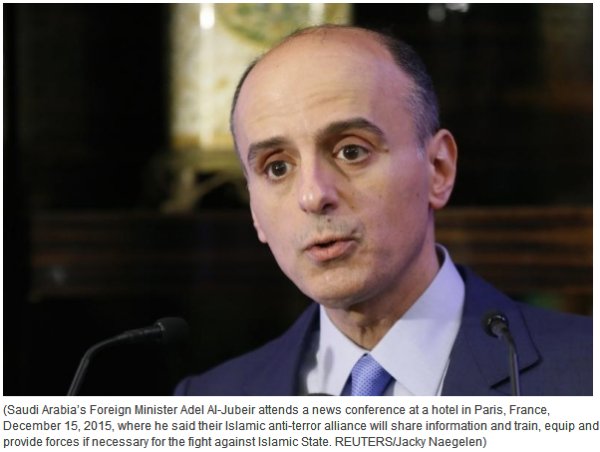 Saudi Arabia has formed an alliance of 34 Islamic nations which will be headquartered in Saudi Arabia (first link and second link). The announced purpose of the alliance is to fight terrorism. That is a worthy goal, but I think there is more to this alliance than the stated purpose. However, in support of its stated purpose, there is a welcome development from Jordan–a nation within this Saudi-announced alliance. Jordan hosts an effort to eliminate educational materials which glorify death and replace them with materials that celebrate life (third link). Since terrorists often seek a martyr’s death in their violent acts, this would be a welcome step toward removing items from the Islamic culture that encourage some Islamic people to become terrorists. Hopefully, all the members of this new coalition will emulate Jordan’s example.

However, when asked about whether the new alliance will contribute ground troops anywhere, the Saudi spokesman was vague in his answer. There are no shortage of locations to deploy “boots on the ground” if this alliance is going to be a real military alliance. How many of these nations will contribute troops to fight the Iranian-backed Houthis in Yemen? How many will send troops to fight beside the Kurdish Peshmerga in Iraq and Syria as they fight ISIL/ISIS? My guess is no such troops will be forthcoming any time soon.

There is another area starting to erupt that could use some anti-terrorist Islamic troops to combat it. The former nation of Libya is, as I’m sure readers realize, currently torn into regions ruled by different tribes, factions, and warlords. The US and NATO attacks to dethrone Qaddafi several years ago have caused this messy situation. ISIL/ISIS even rules a portion of the former Libya. It controls the old Libyan city of Sirte, and the fourth link reports that ISIS/ISIL forces inside the former Libya are expanding their territory with a goal of gaining control over a region with oil wells. I think this action indicates that the efforts of the Russian and French military attacks to wipe out the ISIL/ISIS oil wells, facilities and transportation systems in Syria and Iraq are really hurting ISIL/ISIS’s income. Their Libyan gambit is likely an effort to replace their lost oil revenues. Will this new 34-nation Islamic alliance do anything to stop the ISIL/ISIS from gaining control over former Libyan oil fields? Probably not. Will the USA do anything to fight ISIL/ISIS in Libya? Probably not.
Egypt might if the ISIL/ISIS effort looks like a growing military threat to that nation.

I think the truth is that the 34-nation, Saudi-led alliance mostly exists on paper for now. I believe it a Saudi effort to build a Sunni Islamic alliance to counter the growing power of the Shiite alliance led by Iran. Notice which nations are not in the new 34 nation Islamic alliance. Excluded are Shiite Iran, the Iranian-dominated central governments of Syria and Iraq as well as non-state, Iranian proxies like Hezbollah and the Houthis of Yemen. All are Shiite nations or entities. The purpose of the new Saudi-led alliance is, I think, very clear.

As my readers know, Ezekiel 38-39 prophesies the list of nations that will compose the Gog-Magog alliance that will attack the modern nations descended from the ten tribes of Israel at the very end of our “latter day” period of time (38:8 and 16). Included in the list of nations within the Gog-Magog alliance is “Persia” (verse 5), which is Iran. It makes sense that since Iran is the leading Shiite Islamic power, its Shiite allies will be in that alliance as well. The Sunni Arabs (Ishmaelites) and Turkey (Edom), who are descended from Abraham, are not mentioned as being in the Gog-Magog alliance. It is also logical that the Sunni bloc of Islamic nations will not be in the final Gog-Magog alliance. The formation of the 34-nation Sunni Islamic alliance is likely a step to keep the Sunni nations out of the Iranian orbit. If so, it serves as evidence that the Divine will, as expressed in Ezekiel 38-39, is being worked out in modern geopolitical events.