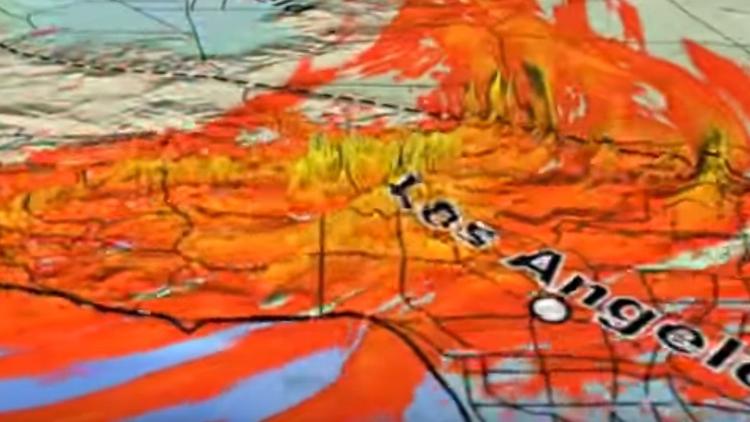 A warning has emerged from the scientific community that the famous San Andreas Fault in California is “locked and loaded” for a possibly imminent earthquake event. Earthquake science is, as I’m sure all readers know, an inexact science, but the first link and second link detail scientific analysis that California’s San Andreas Fault has reached a point where a major earthquake is increasingly possible. The greatest danger is apparently in Southern California along the lower portion of the San Andreas Fault, but, given the difficulties in predicting earthquakes, the danger is not limited to the southern portion of the fault line. Obviously, the area most threatened by this scientific warning is the Los Angeles metro area.

The first link includes a map of California showing where the earthquake danger is the greatest and the region of apparently lesser danger in the middle portion of the fault line. It includes estimates of deaths and damage from a possible large earthquake in the region. While I certainly am not in the earthquake prediction camp, this scientific warning is worth passing on to all readers, especially those who live anywhere near California. If a major earthquake hits one of the huge California metro areas, the impact would affect the entire USA due to supply interruptions of all kinds of products and the urgent need for relief supplies to be redirected from the rest of the USA to areas of California hit by such a quake. A truly large earthquake would likely eliminate electric power for a long time in the affected area and millions of people would be dependent on government and private agency relief efforts which would be strained to the utmost. Remember how Hurricane Katrina left the people of New Orleans all but on their own for days and it took more time than anyone expected for federal relief efforts to become significant.

The Bible warns us in Matthew 24:7 that earthquakes in a variety of places will occur during the latter days of this age. Isaiah 2:12-22, Isaiah 24:1, 18-21 and Ezekiel 38:20 also warn of immense, even global, earthquakes during the climax of our age before the end of this age. Isaiah 2:19 specifically predicts a global earthquake and verse 15 prophesies God’s wrath at the end of this age will be upon “every high tower and upon every fenced wall.” The term “high towers” would be an apt prophetic description for the many skyscrapers than dot every major metro area. The prophecy in Isaiah 24:1, 18-21 includes language that would be appropriate if the earth experienced major tectonic plate shifts or slippages all over the earth.

Clearly, the warning to us about earthquakes in the latter days applies to all regions of the earth, not just those with known fault lines. We all need to take heed. While no one can guarantee one’s own safety in a major earthquake, there are some common sense steps to take to lessen damage from earthquakes. For example, many forget that one the major threats in an earthquake’s aftermath are large fires. However, that danger is obvious when one realizes that gas lines will likely be broken all over the earthquake zone and fires will erupt at the very time that the earthquake has also ruptured water lines and fire departments will likely have little or no water to fight fires. One step that can be taken by everyone to help prevent earthquake-related fires in your home from occurring is to secure hot water heaters in homes to nearby walls so they will not topple over during an earthquake. I think I’ll take my own advice on this. While I do not live an earthquake zone, it is a common sense and cheap precaution to install a metal strip around a water heater and secure the strap to the wall.

The fourth link and fifth link graphically reveal how great the danger is of an urban fire in a large city. The Canadian city of Fort McMurray, Alberta just had to evacuate its approximately 90,000 residents very quickly when a wildfire approached the city. Some residents had only a couple minutes to grab essential items and flee in their cars from rapidly advancing fires. Some media reports indicate that almost half the city has been reduced to ashes by the fires. Imagine what could happen to a large city hit by an earthquake when many fires break out and fire departments cannot fight them. Everyone could potentially have to flee quickly at a time when roads may be blocked and bridges and overpasses collapsed. At least the residents of Fort McMurray had intact roads on which to flee a large fire. What would you grab if you had only minutes to prepare for a sudden escape from a calamity of some sort? At least the residents of Ft. McMurray had several minutes warning before they had to flee the fire. An earthquake gives everyone no advance notice at all. It pays to have a plan made in advance.

Again, no one can plan for every eventuality and I don’t want to be alarmist as it is also possible that the San Andreas Fault will not produce a “big one” in the immediate future. However, responsible scientists have warned that the southern California region is especially prone to an earthquake in the near future and that warning should be taken seriously. The “ring of fire” around the Pacific Ocean is especially prone to generating earthquakes and recent quakes have struck Japan and Ecuador on opposite sides of the “ring of fire.” It is only a matter of time until a major quake hits the US West Coast, which is draped along one side of that “ring of fire.” the scientific experts cited in the first two links indicate that that time may come in our foreseeable future.