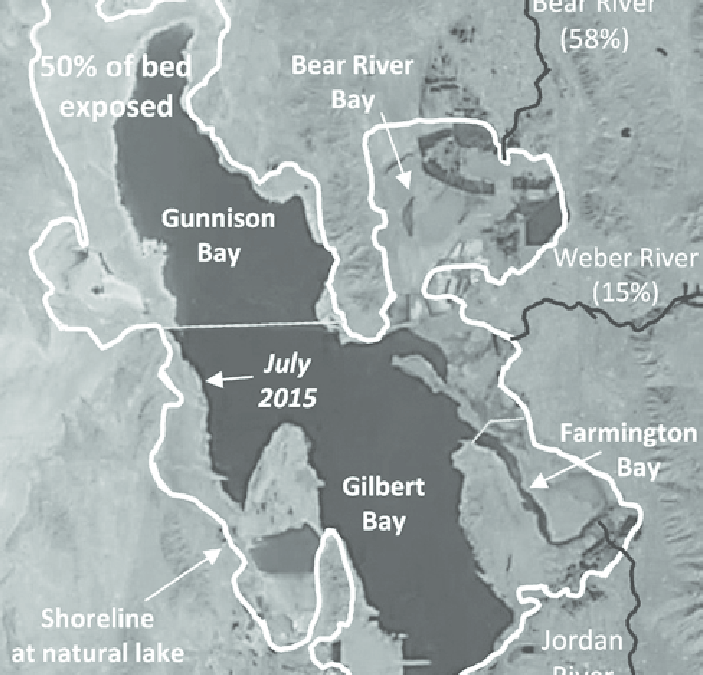 In recent months my posts have followed the worsening crisis caused by the “mega-drought” in the American Southwest states. This post is devoted to bringing to readers’ attention an aspect of this crisis of which I was previously unaware. The metro Salt Lake City region has been placed in growing jeopardy due to the rapid shrinkage of the Great Salt Lake. I’ll begin by citing the article that alerted me to this danger. The article was entitled “Salt Lake’s Environmental Bomb” in the June 12, 2022 issue of the Minneapolis Star Tribune, which was a reprint of an earlier New York Times article by Christopher Flavelle published on an unknown date.

The article’s facts were truly alarming. It reported that the Great Salt Lake has “already shrunk by two-thirds (emphasis added),” and that the exposed arsenic salts from the dried-up lake bed risk poisoning the air that is breathed by the residents of Salt Lake City’s region–which contains “three-quarters of Utah’s population.” Explosive population growth in the region is putting immense pressure on the region’s fresh-water supplies, which hastens the drying-up of the remaining water supplies in a vicious circle. Indeed, the Great Salt Lake has reached its lowest level ever and is still shrinking. The article further reports that the salinity of the Lake used to run between 9-12%, but it is now rising and if it reaches 17%, the ecosystem will begin to collapse. Scientists warn the algae in the Lake will then begin to die, “threatening the brine shrimp that consume it.” This, in turn, will threaten 10 million migratory birds which stop there to eat the brine shrimp to survive on their migratory routes. One scientist is quoted as saying “…we’re at the precipice. It’s terrifying.” Inexplicably, local governments have made the problem worse by giving residents cheap water usage charges which encourage wasting water, and Salt Lake City residents consume much more water per capita than citizens in other arid cities like Los Angeles and Tucson. The growing heat also increases water demand for lawns, crops, etc.

That this crisis has developed until now with little action from local governments to address the problem is surprising to me. The region is dominated by the Mormon church and Mormons are known for their church doctrines involving preparedness. In spite of that doctrine, local governments in Utah have essentially ignored this serious threat to the viability of their region. This may be changing now. The first link relates actions which Utah governments are now considering or implementing to slow the advance of this serious ecological threat. It needs to be addressed meaningfully enough or commerce will stop relocating to Salt Lake City and property values will drop when the crisis threatens local water supplies. If readers can find the issues of the above-cited newspapers in their local library’s archives, it would be time well spent to read them. The satellite photos of how dramatically the Great Salt Lake has shrunk are striking. Clearly, overdue actions by Utah governments are needed now: significantly raising water usage charges, diverting more water to the Great Salt Lake to lessen the arsenic poisoning to the local air, mandating water conservation efforts, etc. The second link and third link offer more specific information on the crisis as described above. The mega-drought is spreading to more and more cities in the American Southwest states. As major reservoirs continue to drop, the availability of water will become an ever-more critical issue. Electricity production in the Southwest will also be dramatically reduced when intake pipes from reservoirs to the hydroelectric plants can no longer draw any water into the generators. Water wars will steadily get worse as cities compete with agriculture for dwindling water supplies.

Previous posts have cited the hitherto unsuccessful efforts by California authorities to encourage lower water usage by state residents. When California Governor Newsom called for voluntary water reductions by the masses, water usages by the citizens actually rose! I think a mindset is developing in the masses that they sense they are being told to reduce water usage while the rich make no water sacrifices at all. Until water supplies are cut off to the Southwest’s endless number of golf courses and until the rich are required to empty their private swimming pools, I think the mindset of the masses is to not take the water crisis seriously. Also, California’s unique governmental blindness continues. California sits next to the Pacific Ocean, an endless supply of free water. With public revenue bonds to fund a large number of water-desalinization plants, California would have plenty of water for its cities and its farmers and the state could profitably export water to all the dry inland states. Since Saudi Arabia, Israel and other arid nations have successfully provided water to their citizens for years via desalinization plants, the technology already exists. However, California seems unable to see this easy solution to their water problems.

The Bible has very relevant prophecies and scriptures for this growing crisis. Matthew 24:7 foretold that “famines” would characterize the latter day afflictions to befall mankind, and famines are the logical result of severe droughts. Revelation 6:1-6 (the famous “four horsemen of the apocalypse” prophecy) warns that food shortages will characterize the latter day traumas and that food will be rationed by price. This is already happening as food price inflation (and every kind of inflation) is now headline news. There is a biblical warning in Deuteronomy 28 that modern mankind ignores to its own peril. The Creator God in this chapter lists blessings for obedience to his ways and cursings that will befall nations that forsake his ways. I’d like to call everyone’s attention to Deuteronomy 28:23-24 where the Creator warns disobedient nations that severe drought will be sent upon them and that the heavens will produce dust storms instead of needed rain. Americans do not realize how important water in the Southwest states is to our national food supply. A very large percentage of vegetables, fruits, nuts, etc. is grown with irrigated or reservoir water in the Southwest states. If the mega-drought continues in those states, the nation will run short of many food products and the prices will go steadily higher (just as Revelation 6:6 foretold).

Ask yourself: Is America drawing closer to being in harmony with God’s laws or is America (and the nations) abandoning God’s laws? The answer is obvious. America and the entire Western world is not only abandoning God’s laws, but they are also doing it with an attitude that is described in II Thessalonians as having “pleasure in unrighteousness (sin).” Western culture is denying God and his laws in a massive way. Every imaginable kind of perversion and rejection of traditional values is encouraged and celebrated. In doing so, mankind is collectively “giving God the middle finger” with an attitude of all-out defiance. Galatians 6:7 says that God will not be mocked, but that is happening everywhere nowadays. God has patience, but when it runs out, the price paid by a rebellious mankind will be terrible. Famines, droughts and food scarcities are just one of the punishments God will send on disobedient nations, and those prophesied afflictions are happening right now. If America, Western civilization and the world continue to reject and mock the Creator God and his ways, prophesied divine punishments will steadily get worse. At some point in mankind’s latter-day rebellion vs God, God will send two unprecedentedly powerful prophets who are prophesied to be able to control the weather and smite the world “…with all plagues as often as they will” (Revelation 11:3-6). Mankind is in for a shock. Mankind has been duped by several generations of the ridiculously unscientific theory of evolution being force-fed to students to think there is no Creator God. Mankind will be stunned when they are eventually forced to confront the reality of a very angry Creator. You can read much more about these final two prophets in my article, The Two Witnesses.