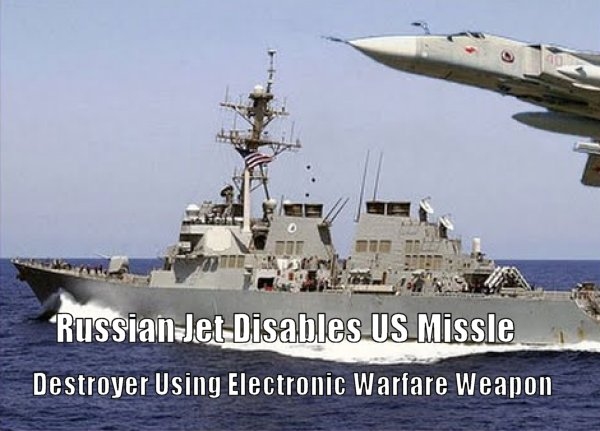 Today I was just going to relax and give my sore back a rest, but I decided to check my email and a few links. I found that a reader had sent me a link which was so important that I had to pass it on to all readers– as well as a number of other related links on the same topic which I found in web searches that verify the information in the link sent to me.

The first link was the one sent to me by a reader, and it contains a half-hour segment from a radio show (the Richie Allen Show) which interviews Dr. Craig Paul Roberts, a former high-ranking official in the US Treasury Department under President Reagan. Dr. Roberts reveals that there is a “hush-hush” report circulating within the US military and global intelligence services that the Russians have deployed with their forces in Syria a very sophisticated and new ECM (Electronic Countermeasures) system which can shut down all US (and western) military electronic/communications systems within range of the Russian jammer unit. Reportedly, this new Russian system is far more advanced than any electronic system now deployed by the USA, Israel or NATO, and that it has been activated twice already in the Mideast to demonstrate its ability to repel/disable US or Israeli fighter jets.

This new Russian ECM pod is called the “Khibiny” system, and it was previously used against a US naval warship in the Black Sea (second link) and against the Ukrainian military by Russian or Russian-supported forces (third link). The Khibiny ECM pod apparently disabled the communications and control systems of the US warship so completely that the crew was panicked (and with good reason if this report is fully accurate). The third link reports the US military is deploying personnel with the Ukrainian military to learn how to fight the Russian military while the Khibiny systems is deployed. The fourth link adds that this same Russian ECM system has been deployed vs. the USS Ronald Reagan, shutting down its electronic systems as well. Additionally disturbing is the fifth link which examines whether an electronic shutdown of some air-traffic control systems on the US West Coast was due to this Russian jamming capacity being tested against US civilian systems. The sixth link and seventh link are Google web search pages which offer readers some of the above-cited links plus many more on this subject. They were found as I attempted to fact-check some of the information contained in the first link. The fourth link reports that this new Russian ECM system has been deployed in Kaliningrad (in Northern Europe) as well as in the Black Sea region and in Syria.

This is very serious. If the information in these links is all true, then the US and NATO have been “asleep at the switch” and dangerously complacent about military matters during the Obama administration. The Khibiny system gives the Russian military an enormous advantage over its opponents. Obviously, the USA, NATO, the Israelis, Japan, India, etc. all need to have a mutual “crash program” activated to learn how to defeat this new Russian defensive system. The new Russian ECM system doesn’t apparently do any offensive damage to anything, but it can reportedly shut down command, control and communications systems of all Western military platforms. If so, it is a new super-weapon. It also reveals a critical flaw in US and all modern military thinking. The US (and other) militaries have been steadily developing all-digital electronic systems in all their equipment; however, this new Russian ECM systems apparently has turned the US and western reliance on all-digital systems into an Achilles heel. It reveals the urgent need for back-up systems which can be activated if digital electronic systems shut down. An obvious immediate need is to quickly equip and retrofit alternative targeting, weapons-control and communications systems into our air, naval and army platforms so our military forces can continue to fight and use their weaponry against opponents even if the Khibiny ECM system is deployed. This may mean that old manual control systems need to be installed in all US military weapons platforms or perhaps older analog systems may not be susceptible to the new Russian ECM system which apparently works so well vs. digital systems.

Meanwhile, American civilians and all westerners are largely clueless about this very dangerous Russian advantage over all US (and western) military weapons systems. If they knew how vulnerable our military systems now apparently are, they might want their national leaders all impeached and replaced for dereliction of duty and neglect of our collective national securities.

The first link has additional useful information about the extent of the pounding that ISIL forces are taking at the hands of the Russians in Syria and Iraq. Russia is serious about obliterating ISIL in a way that Obama never was in his “phony war” against ISIL. The links offer and lead to a wide variety of many other informational links. All readers should realize that I do not endorse and cannot vouch for the accuracy of the links I cite or which appear on your computer screens as related links. However, there are many news links from many sources which verify the existence of this new Russian ECM system, and I wanted readers to know about it right away.

This new Russian ECM system reminds me of a phenomenon in a cancelled NBC-TV show from a couple years ago. It was called Revolution, and it was set in a dystopian, post-apocalyptic America after a reckless, out-of-control US government project filled the atmosphere with tiny nanobots that eventually created some kind of dampening field which prevented electrical devices from working all over the world. I can’t help but wonder if Russian scientists watched that show and developed a weapons system which creates a dampening field that shuts down all digital electronic communications, similar in principle to the theoretical one on the TV show.

Ezekiel 38-39 prophesies that Russia, China and Iran will attack the USA, Europe and their global allies at the very end of this age. This new Khibiny ECM pod developed by the Russians could embolden them to launch such an attack earlier rather than later. I can’t help but wonder also what is deterring the Russians from launching the prophesied attack now if they have such a major advantage? It may be that the USA also has secret weapons systems that Russia can’t counter and we may be in a MAD (Mutually Assured Destruction) situation without the global civilian populations realizing it. I do believe that it can logically be deduced from Revelation 11 that when the Two Witnesses arrive on the scene wielding delegated Divine power from the Creator God himself, their power will deter any nation from acting unilaterally while their three and one-half year ministry is in effect. I hope and pray that God sends them soon…