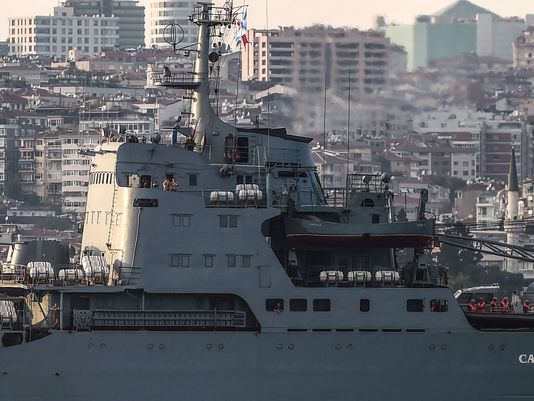 There are other topics on which I wish to comment, but Russia’s powerful intervention in the Mideast keeps growing larger and deserving of more comment. As readers I’m sure realize, Russia has launched a large cruise missile attack vs. Syrian rebels (including ISIS). What is especially noteworthy and deserving of some considerable discussion is the location from which the Russian missiles were fired. As the three links (1, 2, 3) report, the Russians fired a large salvo of 26 cruise missiles from four warships afloat on the Caspian Sea. Americans are very challenged when it comes to world geography as that is a subject that is “under-taught” in US schools. Therefore, there is a lot of subject matter in these attacks that could easily be missed.

It is reported that the Russian cruise missiles traveled through Iranian and Iraqi airspace to reach the ISIS and Syrian rebel targets. While it is no surprise that Iran granted such airspace rights as Iran is a known Russian ally, the fact that Iraq granted such airspace rights makes it ever more clear that Iraq is a Russian-Iranian-Syrian government ally as well (i.e. part of the prophesied Gog Magog alliance as foretold in Ezekiel 38-39). This is a clear indication that the US policy goals in Iraq are now in a state of complete failure. The US military conquered the nation, but the Obama administration and many foolish and weak western diplomats have handed the nation to Russia and its Shiite ally, Iran. I believe that the abject capitulation by the USA and the West to Iran in the recent nuclear facilities deal greatly encouraged Russia to believe that it could now intervene militarily in the Mideast with little fear of any meaningful US or NATO opposition. 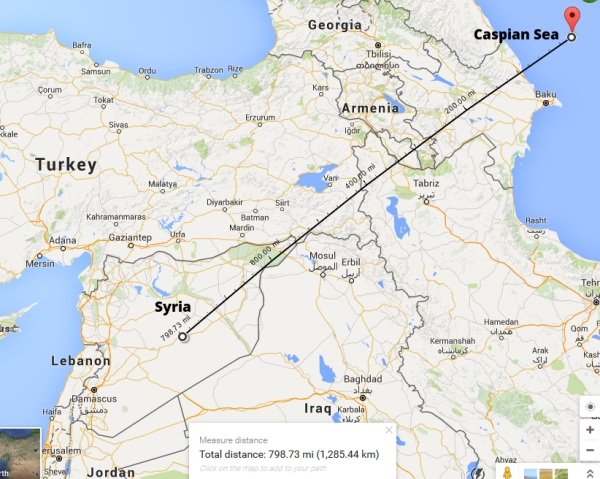 The media links report the Russian cruise missiles flew 900 miles before hitting their targets. Was that their maximum range? Not likely. No nation wants to reveal to rivals the limits of its primary or new weapons systems. These missiles can likely fly considerably further than the 900 miles the Russians have now revealed to the world. That means that, from ships in the Caspian Sea, Russia can very likely target its cruise missiles at the Black Sea, parts of Eastern Europe, much of the Mideast, the entire Persian Gulf, etc. Now let’s consider an obvious question that no media source, to my knowledge, has yet asked or evaluated. Why has Russia built at least four ocean-going naval warships in the Caspian Sea, an inland Sea with no access to the ocean? This would be the equivalent of the US Navy building four surface warships to sail around Lake Superior and parts of the US inland Great Lakes system with no access to any ocean. At first glance, this seems like a ridiculous waste of money. However, I think there are two reasons why Russia has cleverly taken this action, and both make sense.

The first reason is that the Caspian Sea is so large that it can allow for the training of Russian naval crews inside Russian territory who are then later deployed on Russia’s oceanic fleet, and a Caspian Sea location allows for the secretive testing of new naval weaponry because the Caspian Sea is surrounded by Russia, Iran and nations that were formerly in the USSR. This allows for new naval weaponry and tactics to be tested far from prying eyes. In a number of posts in recent years, I’ve observed that Russia and China need to obtain some real combat experience for their military personnel and active testing of their new weaponry in actual combat conditions. They are now doing both in their military supervention in the Mideast (although China’s aircraft carrier has reached Syria, its warplanes are not yet deployed to the region). Russia now is gaining combat experience for its air force crews, Russian ground troops are already in Syria (doing more than what is acknowledged, I’d bet), and Russian naval forces are testing their new cruise missiles against Syrian rebel targets from Russian warships. In a cable-TV report I watched (I think it was on Al Jazeera America), it was reported that the Russian cruise missiles flew at subsonic speed for most of their route and then accelerated to supersonic speed during the last portion of their flight path. I wonder if these cruise missiles also can defensively maneuver and “jink” on final approach to their targets. In previous posts, I’ve discussed media sources that report Russia and China’s new supersonic-capable cruise missiles are designed to accelerate to supersonic speed on the last leg of their flight paths as they attack US aircraft carriers. Since the Russian cruise missiles used in this Mideast attack were all fired from naval ships, these are obviously naval cruise missiles, not land-to-land missiles. This indicates that this Russian missile salvo vs. Syrian targets was likely the first combat testing of the Russian/Chinese naval cruise missiles built specifically to attack US aircraft carriers and large surface combatants. While the missiles were all fired from Russian warships, some of the missiles may have been Chinese in origin so they could be tested as well. New cruise missiles need to be tested to see if they develop navigational or propulsion problems in flight, if they hit their targets accurately, what kind of damage is inflicted, etc. Russia is now getting that field data with every cruise missile they fire at Syrian targets. They are now doing what I’ve been predicting for years: finding a way to be involved in a regional war to get combat experience for their military personnel and combat testing of their new weaponry.

The second reason it makes sense to build ocean-going warships on a huge inland sea like the Caspian Sea is that Russia must intend to use these warships as mobile cruise-missile launchers for use against any targets within the missiles’ service range. It is much harder to hit mobile missile-launching platforms than fixed launching sites. The warships can constantly move about the Caspian Sea and make themselves hard to hit. Also, since they are afloat deep inside inland Russian/Iranian defenses, these warships can be protected in depth by Russian and Iranian air-defense systems located on ground locations surrounding the Caspian Sea. Also, if these Russian warships were located in the Mediterranean Sea or Pacific Ocean, for example, they would be very vulnerable to sinking by US and NATO submarine attacks. However, since they are afloat on the Caspian Sea’s waters, they will never have to worry about US or NATO subs attacking them. They don’t need anti-submarine warfare systems; they can devote all their weapons-carrying space to cruise missiles and carry far more of them than any ocean-going Russian warship of similar class. Given their Caspian Sea location and the great likelihood that the missiles have a greater range than Russia is willing to confirm in actual attacks in Syria, it is all but certain that these specially-equipped Russian warships on the Caspian Sea are carrying long-range cruise missiles that can reach Eastern Europe, all of Iraq, Turkey, Israel and the Persian Gulf, as well as parts of Saudi Arabia and India. Their existence means that US/NATO warships in the Persian Gulf, the Black Sea, the Eastern Mediterranean Sea and parts of the Arabian Sea need, henceforth, to worry about being targeted by Russian cruise missiles flying over Iran and Iraq toward them from Russian navy ships on the Caspian Sea. It also allows for the possibility in any future Persian Gulf war involving Iran that cruise missiles hitting western or Saudi ships from Iranian vectors are actually Russian, not Iranian, cruise missiles even though Iran could claim credit for them

The Russian strategy in the Mideast is clear. It intends to keep Assad in power in at least the western portion of Syria which has the Mediterranean ports Russia needs to keep, and to supplant the USA as the dominant superpower in the region. Russia is well on the way to achieving both goals, although neither is certain quite yet. However, the USA doesn’t appear to understand Russian goals. Obama is quoted in the first link as saying that Russia intervened in Syria because the regime of its client, Assad, was “crumbling.” I agree with that assessment. However, US Defense Secretary Carter is quoted as saying that Russia’s strategy is “tragically flawed.” I think Sec. Carter could hardly be more wrong. Russia’s strategy is very focused and logical. It is adopting tactics which seek to implement its overall strategic goals. In the “great game” of global geopolitics, Putin is playing chess while Obama and his administration thinks they are in a game of beginner’s checkers. Russia is also displaying to the world that it is very willing, in the Ukraine and the Mideast, to use military force to achieve its strategic goals. These actions greatly enhance Russia’s “hard power” and “soft power” perceptions. These actions, so far unopposed by the USA in any meaningful way, are also diminishing the world’s perception of American hard power and soft power. This will have a financial and monetary impact as well. The fact that Russia is willing to use brute force to achieve its goals and the USA isn’t will make it easier for Russia, China, Iran and a host of other nations to replace the current US-dollar based world financial system with a different one in the future because they no longer need to fear the US reaction. Those discussions may already be going on discretely behind the scenes in many world capitals. When an alliance of nations eventually moves to overthrow the global dominance of the US dollar, it will fulfill the prophecy of Revelation 17-18. The “seven heads and ten horns” in Revelation 17-18 are a global financial/monetary alliance, not the ultimate military alliance prophesied in Ezekiel 38-39. I believe the “seven heads and ten horns” will include not only nations within the Gog-Magog alliance, but other BRICS and European nations as well.

Russia is moving swiftly to take advantage of a weak US president and administration while they can do so. The USA may have a very different and assertive president after the 2016 elections. Russia and the world know this. Therefore, Russia and other nations are moving to create as many “facts on the ground” favorable to their position while they have a weak opponent in the White House.