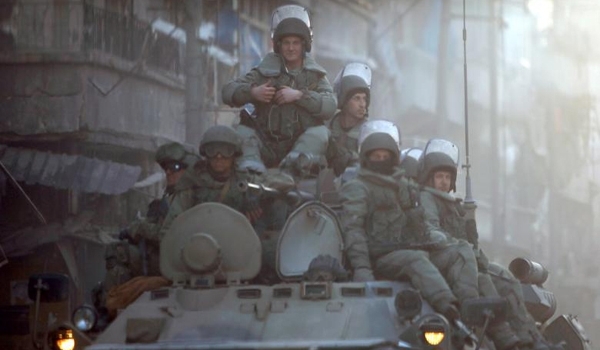 Russian troops have moved to within a few kilometers of Israel’s northern border where it adjoins Syrian territory. The first link and second link reveal that the Russians moved 800 of their troops to positions close to Israel’s borders and approximately 400 more troops to positions near the Jordanian border. This is an ominous development as it raises the risk of a greater war breaking out in the Mideast. The movement of Russian troops to control land close to Israel’s border makes one wonder if Iran, Russia’s ally, will be moving their troops to this Russian-controlled region as well.

Why did Russia move their troops so close to Israel’s northern border at this time? I have theories which may be correct or not correct. Israel has to be worried that the fighting in southern Syria will spill over into Israeli territory. This worry practically begs for Israel to move troops into southern Syria to establish a buffer zone between Israel’s territory and regions controlled by the various radical Islamist militias, Iranian troops or Hezbollah forces. Russian intelligence may have gotten wind of this possibility and decided to move their forces into the region Israel would have seized in an effort to create a buffer zone between Israel’s sovereign territory and the radical Islamist groups operating near the Israeli border. Russia may have pre-empted such an Israeli action by moving their forces into the region first. Again, this may be a correct guess or it may not be the actual reason Russia took this provocative step. There is a second possibility. One of Israel’s “red lines” must surely be that the movement of Iranian forces close to Israel’s territory would provoke an armed Israeli response. Knowing this, Russia may have moved its forces into the “red line” area to make sure no Iranian forces occupy that region. This is also a possibility as I’m sure Russia and Israel do not want their forces fighting each other at this time and Russia has nothing to gain from an Israeli-Iranian war in the region. Whatever the reason for this Russian action, it raises the risk factor of inadvertent combat breaking out between Russian and Israeli forces.

It is not only Russian forces that are active inside Syria. American troops are also active inside Syria. As mentioned in a previous post, Turkey revealed the locations of ten mostly-secret American military bases inside Syria (third link). A faithful NATO ally would never betray the locations of a fellow NATO nation in a region with many active combat zones. This action by Turkey indicates that Turkey is becoming increasingly hostile to the USA and NATO, a very serious development that NATO cannot ignore. ABC-News released a story with information about the American bases and types of forces inside Syria (fourth link). Other media sources have also reported that the USA has a Marine artillery unit based inside Syria to give artillery support to the Kurdish forces that are seeking to drive ISIS troops out of Raqqa, one of their primary strongholds. The information released by Turkey indicates that the USA has two air bases and eight military bases for ground forces inside Syria. It needs to be recalled that President Obama deployed US forces into Syria, and that President Trump has continued the American role there. What kinds of warplanes does the USA have at its two forward air bases inside Syria? I don’t know, but I’ll offer a guess. Given the Kurdish efforts to take Raqqa and the other fighting vs. ISIS going on in the region, the Kurds would need many close air support missions from US warplanes. This would argue for helicopter gunships, A-10 warthogs and perhaps AC-130 gunships (if any are still in active service). All these types of warplanes can give quick and accurate fire support in an active combat zone. American special forces units are almost surely deployed with Kurdish forces to act as forward “spotters” to guide the American warplanes to their targets.

The above developments which have put so many American/NATO/Sunni-backed forces and Russian- and Iranian/Shiite-backed forces together in close proximity to each other could lead to a larger war happening very quickly if the forces begin to engage each other. Indeed, they need to be very careful. ISIS, increasingly on the run, may stage a “false flag” operation to deliberately get these two blocs to start fighting each other instead of ISIS forces.

Biblically, these developments surely give us insights into the actions these two blocs are taking to implement their objectives in shaping the post-ISIS Mideast map. Russia and Iran want to create a land bridge linking all Shiite forces in an arc extending from Iran to Lebanon. The western bloc wants to prevent this from happening. Since Iran has pledged to “wipe Israel off the map,” Israel has every reason to prevent it from happening as well. Such a Shiite land bridge would enable Iran to move its forces right up to the Israeli northern border—where Russian forces are now located. These are very critical developments and the American media focuses very little attention on these things which really matter in world geopolitics. For an in-depth biblical prophetic perspective on how these two blocs will eventually take shape and go to war with each other, please read my article, What Ezekiel 38-39 Reveals about a Future World War III. Most people would be surprised to realize the Bible has many interconnected prophecies about the two rival, global alliances that have come into existence in the world today, and how their final war will begin and end. Various Biblical prophecies reveal that this end-time global war will become so severe that divine intervention will be necessary to prevent an ‘”extinction level event” from occurring on our planet. I invite you to read this article so you are not surprised by these future events when they unfold.