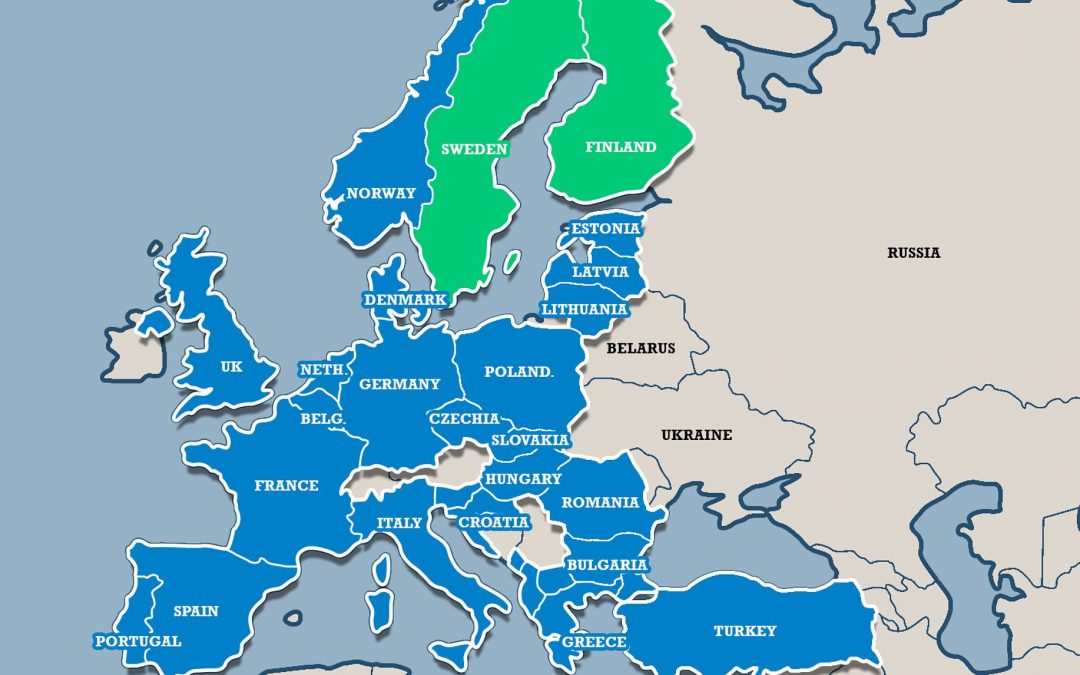 This post will update readers on some aspects of Russia’s invasion of Ukraine, and the growing likelihood that this war will lead to imminent NATO expansion–an outcome Russia very much did not want. No doubt, all readers follow the news so they are aware that Russia is now invading Ukraine from the east in the Donbas region and from the south along the Black Sea coastal areas as well. The Ukrainians are putting up an intense fight, and they are being regularly resupplied with weaponry from NATO nations, especially the USA. The USA is sending Ukraine unspecified numbers of huge howitzers with tens of thousands of rounds to fire at the Russians. The Ukrainians sank the Moskva, a large Russian cruiser which was the flagship of the Russian Black Sea fleet. This sinking was a huge blow to Russia’s prestige and to the Russian military, and it was reportedly the result of being hit by Ukrainian Neptune missiles. The Russians have been driven out of Northern Ukraine, exposing a large numbers of war crimes by Russian soldiers killing and torturing Ukrainian civilians. This only serves to anger Ukrainian forces to fight even harder against the Russians. Putin has claimed victory in conquering Mariupol, a coastal city, but many report Ukrainian forces are still fighting Russians in and around a steel mill located in that city. The costs of this invasion are vastly higher than Putin and his generals expected when they started this war.

The first link reports that Russia has lost 25% of its pre-war military forces that were committed to the Ukrainian invasion. If true, this is an exceptionally high loss rate experienced by the Russians. As I write this, US Secretary of State, Anthony Blinken, and Secretary of Defense, Lloyd Austin have visited Kiev to speak with President Zelenskyy personally. That Western leaders can openly visit Ukraine’s capital indicates that Ukrainian control of the northern region of Ukraine is now very firm. The Ukrainian commanders have proven to be quite capable, and are surely building defensive lines to resist any further Russian invasion from the north.

Recently, there has been one somewhat mysterious element in the military supplies flowing to Ukraine that may be very important. Various media sources have stated that NATO has shipped to Ukraine enough warplane “spare parts” to increase the Ukrainian air force by at least 20 warplanes (second link, third link and fourth link). This allows for some informed speculation. Did the Ukrainian Air Force not have enough Soviet-era air force spare parts on hand or were such spare parts destroyed in a Russian missile attack (a real possibility). There is another possible explanation. Remember early in this war when Poland and other Eastern NATO nations offered to send up to 70 Soviet-era warplanes to Ukraine–a particularly useful option since Ukrainian pilots would need no retraining to fly them. Russia took a very hard view of such an action, and this seemed to cow the NATO nations. However, more may be happening here than is being admitted or reported. If Poland or other Eastern NATO nations recently sent those planes to Ukraine, they could either fly them to the Ukraine with Ukrainian pilots or ship them via ground transportation or via US military transport aircraft.

If Polish or other NATO-nation warplanes were shipped via railroad or military air transport, they would have to be partially disassembled to be shipped. If Soviet-era NATO warplanes were somewhat disassembled, NATO leaders could claim that they were being shipped to Ukraine as “spare parts.” This could mean Ukraine lacks spare parts for warplanes that could otherwise fly again, or it may mean the “spare parts” are actually entire warplanes being shipped to Ukraine in a state of partial disassembly. Russia earlier objected to surplus NATO warplanes being flown from NATO airfields to Ukrainian airfields. By at least minimally disassembling the planes to transport them to Ukraine, that Russian objection is finessed and entire partially-disassembled warplanes could be delivered in a steady stream to Ukraine’s air force (along with other “spare parts” such as bombs, rockets, missiles, etc.). It would not be hard for Ukrainian air force personnel to quickly reassemble the disassembled “parts” into complete airplanes once they reach Ukraine. In warfare, fuzzy terminology is often used to obscure facts. If NATO warplanes are being sent to Ukraine in a partially disassembled state as “spare parts,” this will help Ukraine immensely.

The fifth link offers an analysis of how China is likely evaluating the many Russian military failures in their invasion of Ukraine and pondering whether these failures may necessitate a delay in Chinese plans to invade Taiwan. As allies, Russia and China have surely shared many military plans and preparations. It is very possible that many of Russia’s glaring military weaknesses are present in the Chinese military as well. Personally, I think it is likely that China is seeing the Russian logistical and leadership failures and is looking to see what it can learn from Russia’s mistakes before committing to an invasion of Taiwan. Taiwan has also watched the Russian-Ukrainian war very carefully, and it is  learning lessons about what weaponry is needed to defeat a Chinese invasion.

Some time ago, I observed that Russia risked creating an energized and expanded NATO if Russia invaded Ukraine. NATO has already been energized and its member nations are in the process of making massive military spending increases due to the Russian invasion. It seems very likely that NATO will also soon be expanding. I saw a high Finnish government official on a cable-TV network saying Finland would make a decision in May about joining NATO. His entire interview indicated Finland would be applying for NATO membership. Sweden may join at the same time, or it may join at a later date. The sixth link offers an analysis of what Finland can offer the NATO alliance militarily as an ally. It emphasizes Finland’s intelligence capabilities, but the seventh link offers more details about its actual military strength. Finland has a full-time army of only 12,000, but it can quickly be mobilized into a combat force of 280,000 men as all of them are combat-trained already. It will surprise many (it surprised me!) to read the statement that Finland has 700 howitzers, 700 heavy mortars and 100 Mobile Rocket Launchers. These forces lead Wikipedia to assert that “Finland has the largest artillery [force] in Western Europe.” Finland also has a strong air force, and if it also joins, Sweden is described as having a strong navy and I would add that it also has long had the ability to make warplanes by itself. If Finland and Sweden join NATO, it will give much greater strategic depth to NATO on its northern flank and greatly improve the positions of Lithuania, Estonia and Latvia to fight off a Russian attack. Finland and Sweden have a long record of conducting joint exercises with NATO nations, so both nations are already about as close to NATO as they can be without actually being members of NATO.

Russia’s war against Ukraine shows no signs of ending. There are media reports that Putin wants to “declare victory” and end the war by May 9th–a traditional Russian “Victory Day.” However, the war may be entering a new phase in which Ukraine starts hitting targets inside Russia. The eighth link and ninth link offer details and photos of what is reported to be a recent Ukrainian strike at a huge fuel depot well inside Russia. This is highly unlikely to be an accidental fire as photos show at least two distinct areas which have been hit. News reports vary in reporting what type of weaponry caused this damage. It may have been armed Ukrainian helicopters, a Ukrainian ballistic missile or it could be an airstrike by Ukrainian warplanes. All are possible. If Ukrainian attacks on Russian targets inside Russia increase in frequency, it will be much harder for Putin to dupe the Russian people into thinking they are fighting a necessary war or that they are winning it. The longer this war continues, the more Russian soldiers will die and the more Russian armored and aerial forces will be destroyed. How bad are Russian losses now? While not explicitly documented, I saw an interview on a cable-TV news outlet with a high-ranking US retired officer whose estimate was that Russia had lost 15,000 soldiers killed, and approximately 3,000 tanks and armored vehicles of all kinds. If 15,000 Russian soldiers have been killed in combat, there could be as many as 30-40,000 wounded. The Russian-Ukrainian battles are not the low-intensity skirmishes that the USA fought against ISIS and the Taliban in Iraq and Afghanistan for years; the Russian-Ukrainian battles are more on the scale of World War II European battles. This is a massive war across a wide front of Eastern/Southern Ukraine. I don’t think Russia would have started this war if they had known their own losses would prove to be so high.

In terms of biblically-significant prophecies, I am growing more confident that this current war is significantly delaying any Russian-Chinese-Iranian plans to launch the age-ending, global World War III prophesied in Ezekiel 38-39, Joel 2, Zechariah 14 and Revelation 19:11-20:4. If Russia had conquered Ukraine in very little time with few losses, Russia might have been emboldened to continue right into Europe and try to seize Berlin, Paris, Warsaw and other European cities before the USA could have reinforced NATO forces in strength. At the end of this current war, we will have an expanded and more-unified NATO as well as a weakened Russia with an arsenal of weaponry that everyone now knows is very vulnerable to NATO weapons. It seems evident that none of Russia’s much-vaunted tanks can survive attacks from light-weight, shoulder-fired, anti-tank weapons fielded by the USA, the UK, and many European nations. Turkey has been shown to have an armed drone which was sold to the Ukrainians which has proven to be very effective vs. Russian armored vehicles. Because Russia is going to be forced to reassess its entire military force and rebuild its military before it can fulfill its prophesied role in Ezekiel 38-39, it appears that we have several years yet to unfold in our latter-day sequence of time. This is quite in line with other biblical prophecies that foretell that the current “Babylon the Great” global system will collapse (Revelation 17) and be replaced by a new, global “Beast” system that will rule for a mere 42 months (Revelation 13) and which will be largely concurrent with two great, miracle-working prophets that the Creator God will send into the earth to give a final warning to mankind (Revelation 11).

For documentation that we are, indeed, living in the biblically-prophesied “latter days” of our age, please read my article, Are We Living in the Biblical Latter Days? For discussions of other topics mentioned above, please read my articles, Is Babylon the Great about to Fall…Ushering in a Global “Beast” System?,  The Two Witnesses, and What Ezekiel 38-39 Reveal about a Future World War III. That the Bible has so many prophecies that are being specifically fulfilled in our time affirms that the Bible had to be inspired by an infinitely-powerful Creator Being.