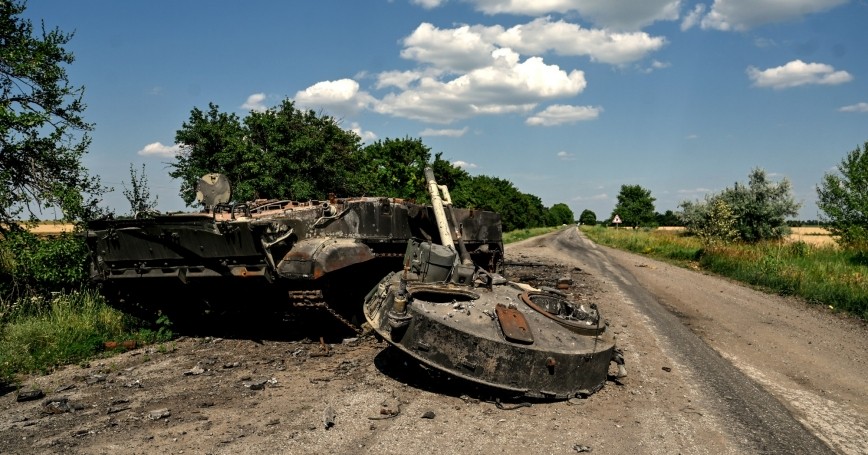 In this post, I will offer commentary regarding how the Russian war against Ukraine may delay the Gog-Magog war further into the future than some Christians currently expect. I’ve been sent a variety of prophetic links from various sources in recent years which have predicted an imminent fulfillment of the prophesied Gog-Magog war foretold in Ezekiel 38-39. It is true that Russia and China have been adopting a much more militarily aggressive posture in recent years, and China has especially been building a multitude of new modern weaponry. These actions have made it logical that they are preparing for war, and the USA, NATO and their allies are their logical targets. This has given birth to many predictions that the Gog-Magog invasion of the modern nations of “Israel” is, indeed, imminent.

Over the years, I have observed in my posts that Russia and China had built large military forces which look good “on paper,” and they make an impressive sight when displayed in military parades and exercises. However, I’ve repeatedly observed that the Russian and Chinese militaries actually need regional wars to test whether their military forces can succeed against American/Western technology and military forces. I’ve noted that their militaries have not been involved in any large-scale combat operations against peer military forces in decades. Undoubtedly, Russia and China are already preparing their plans to launch an invasion of the USA, NATO nations and global Western allies, but it is wise to first test their forces against Western technology before launching a global World War III. The Russian-Chinese axis and their allies could find themselves in major trouble if they over-estimate their own military forces and under-estimate the Western powers.

Russia was the first to test their military forces via a large-scale invasion of Ukraine, a nation almost the size of Texas (first link). Ukraine was a logical target for Russia: it had smaller military forces than Russia and used to be part of the Soviet Union so Russia knew the geography of Ukraine very well. At the start, Russia expected an easy and rapid victory. They could not have been more wrong. Ukraine saw that it was being surrounded by a Russian invasion force and they took steps to prepare for such an invasion. The Ukrainian nation was galvanized to resist by its President Zelenskyy when he refused a “ride” out of Ukraine and instead asked for “ammunition” from NATO as he stayed inside Ukraine. Zelenskyy’s leadership and ability to obtain western weaponry and support for Ukraine has been impressive. Instead of a quick Russian victory, Russian forces invaded Ukraine in a desultory fashion. Russian military performance surely has been hugely disappointing to Russia’s leaders. Russia was unable to take Kiev or Kharkiv and Russia suffered heavy casualties on land, air and sea. American, British, Swedish and other Western nations poured high-tech weaponry into Ukrainian hands and the Ukrainians inflicted great losses on Russian forces. Some estimates posit that up to 60,000 Russian troops have been killed or wounded. Much vaunted Russian tanks and armored vehicles proved no match for American Javelin anti-tank weaponry (plus British and Swedish counterparts). Destroyed Russian tanks have littered the Ukrainian landscape in combat areas, and there is a plethora of internet websites which show examples of this as well as “live” destruction of Russian armor. Readers can Google topics such as “Russian tanks destroyed by Ukrainians” or “US Javelins destroying Russian tanks in Ukraine” and you will find many hits.

Ukraine has recently launched a counter-offensive which has driven Russian forces away from Kharkiv and northeastern Ukrainian territory (second link, third link and fourth link). Some reports assert that Ukraine has re-taken up to 6,000 square kilometers of Ukrainian territory once occupied by the Russians. The Ukrainian offensive has also made advances in the Kherson region in the south and a major Russian debacle there is possible. Internet reports I’ve seen (some are subscription-only and cannot be reproduced) have stated that the Ukrainians have Russian forces in the Kherson region pinned up against the Dnieper/Dnipro River without a route of escape or means of significant resupply. The Ukrainians have reportedly used high-tech American artillery to destroy both fixed and pontoon bridges over the river to reinforce Russian troops. This raises the possibility of a mass Russian surrender of forces when/if their ammunition and supplies run out.  If this happens, the Russian invasion effort and the government of Vladimir Putin could collapse.

Russia has learned a very painful lesson: its large military forces are not “ready for prime time” against American/NATO weaponry, logistics and tactics. Not only is Russian armor not able to defeat NATO anti-tank weapons, the Russian military has shown itself to be surprisingly inept in matters of logistics, tactics and troop morale. Putin and Russian generals are learning that Russian troops are ill-motivated to risk their lives to invade other nations which do not threaten Russia. Putin hoped that Russian troops were like Roman Legionaries–ready to invade innocent nations to advance the egos and megalomania of Roman Emperors, but that is clearly not the case. It seems much more likely that Russian troops are eager to stop fighting and go home. There are now even reports of mass surrenders of Russian units.

The last chapter of the Russian invasion of Ukraine has not been written yet, but several facts are clearly evident. The Russian military has lost (and continues to lose) a very large amount of weaponry and it has lost many troops. Due to its large military losses, Russia is rapidly losing the ability to invade anyone else any time soon. Russian tanks and armor need major upgrades before they can again take on US/NATO anti-tank weaponry. China has watched the very disappointing performance of Russian military forces and realizes Russia is in no condition to join it in invading North America, Europe, Japan, etc. China may yet try to conquer Taiwan, but seeing how well American weaponry has worked against Russian weaponry, China may opt for a naval blockade of Taiwan rather than a direct invasion if China decides to move against the island. Russia now realizes it needs China more than it previously thought. American and NATO military planners also must be pleased at how well their high-tech weaponry works against Russian weaponry. If American high-tech weaponry can be used to such great effect by Ukrainians who have barely had time to train on such weaponry before it is used against Russian forces, think how well NATO troops would do with such weaponry when they have been trained for years to use it very skillfully.

How does this all fit in with biblical prophecy? If Russia had easily conquered Ukraine and swept aside American/NATO weaponry, an invasion of Western nations would now be likely and the Gog-Magog invasion of Ezekiel 38-39 might indeed be imminent. However, the opposite has happened. Russia is unable to defeat Ukraine; how much worse would it be for Russia if it were now fighting all the NATO nations as well? However, America and NATO have been given a cautionary message too. The USA and other NATO nations have given Ukraine a large portion of their own war stocks with which to fight any future war. You can be sure Russia and China are keeping track of the steady reduction of the USA’s weaponry reserves to gain an idea of how long American war supplies will last in any prolonged war with China and Russia. The USA and NATO nations urgently need to rebuild their reserves of weaponry.

It now appears that the Gog-Magog invasion of the Western nations has been made less likely in the immediate future. The longer the Russian war against Ukraine continues, the lower Russia’s war supplies will become. It will take time for Russia to rebuild its forces and upgrade them to be able to fight American/NATO forces. We are unquestionably living in the prophesied “latter days” of the Bible. This fact is easily confirmed in my article, Are We Living in the Biblical Latter Days? It is also still my assessment of biblical prophecy that several prophesied events must occur before the World War III events prophesied in Ezekiel 38-39 will happen. I believe that Revelation 13 and 17-18 must first be fulfilled  before Ezekiel 38-39 is fulfilled. The prophecies in Revelation foretell that the current global world order–called “Babylon the Great” in these prophecies–must be overthrown by a cryptic alliance called “the seven heads and ten horns” which will create a new global order which will very popular with the masses. The new global order will be called the “beast” system, and it will be so popular that the nations will fight (unsuccessfully) against Jesus Christ and his heavenly army to keep the beast in power (Revelation 19:11-20:4). I also believe that the prophesied Two Witnesses will fulfill their 1260 ministry plaguing the beast’s system and warning the world that the return of Jesus Christ is imminent. The vast majority will not repent and will even celebrate when the beast kills the Two Witnesses (Revelation 11). The beast’s message will be so attractive that it will almost deceive even the “very elect” (Matthew 24:23-24). Obviously, because it is the beast power which kills the Two Witnesses, a good portion of the beast power’s reign and the ministry of the Two Witnesses will be concurrent.

The Gog-Magog war will surely happen…eventually. However, I think the very poor performance of Russia’s military forces in its invasion of Ukraine have delayed that event for some time. For those wishing to see what all the Bible’s prophecies say about the end-time World War III which will occur at the end of our age, please read my article/research report entitled, What Ezekiel 38-39 Reveal about a Future World War III. Biblical prophecy is very specific on this climactic war. It gives the motive for the war, who starts it, the primary direction from which the first attack will come, how the war ends, and even the very high casualty figures which will be suffered by the invading Gog-Magog forces. Since biblical prophecy reveals all these details in advance, you might as well read about it now–before it happens.