Russia, China and Iran Get More Aggressive Vs. USA 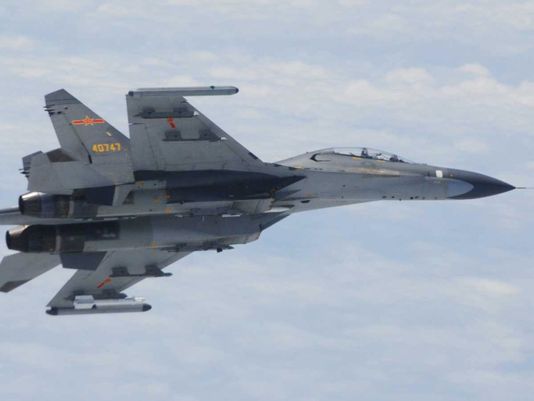 There has been a wave of media stories detailing increasingly militaristic provocations of the USA by Russia, China, and Iran. These provocations are getting more frequent and dangerous. The first link reports on a number of bellicose actions by the Russians and Chinese which include buzzing US warplanes in the Pacific Ocean, the Baltic Sea region, etc. Months ago, Russian warplanes buzzed a US warship in the Black Sea, and Russian warplanes came extremely close to one US warship in the Baltic Sea (second link). The second link also has a photo of a British warplane intercepting a Russian bomber close to British territory. The first link even reports that Russia is conducting combat patrols of its bombers just off the USA’s West Coast!

The Iranians are also getting more combative since Obama surrendered to them in the so-called “nuclear agreement” that the USA and Western nations signed with Iran. Iran has threatened to close the Straits of Hormuz to US shipping (third link). The narrow Straits of Hormuz control access between the Persian Gulf and Indian Ocean, so it is a vital maritime location. This threat by Iran was also a warning to Saudi Arabia and the nations of the Gulf Cooperation Council, whether Iran acknowledges it or not. If Iran seriously tried to close the Straits of Hormuz, I think even a weak leader like Obama would have no choice but to go to war against Iran as unfettered access to the Straits of Hormuz is essential to the world’s oil shipments.

What is the reason for the growing military provocations of the USA by Russia, China and Iran? It is my view that all three nations are testing Obama to see if he has any backbone at all. So far they are not encountering any backbone on Obama’s part. He has done nothing meaningful to respond to these provocations. In my view a president like Ronald Reagan, after the first buzzing of a US warship by a Russian warplane, would have issued a warning to Russia that any further such actions would result in any Russian warplanes being fired on and shot down…and he would have given a “weapons free” directive to all US forces. When China started building artificial island military bases in the South China Sea, I think Reagan would have immediately started doing the same thing and putting US military forces on “our” artificial islands. He understood that you have to respond to bullies with force. Obama does not understand that, and he comes across ever weaker in the eyes of the whole world each time he does nothing when Russia, China and Iran provoke the USA to see if the USA will ever respond with some real teeth. The abject weakness of the American response under Obama must be chafing the military of the USA to no end. The intensity of the Russian, Chinese and Iranian actions and threats do run an increasing risk of provoking a limited or regional war.

As readers of this blog know, the Bible in Ezekiel 38-39 specifically prophesied that Russia, China and Iran would lead an alliance of nations vs. the western world and its allies in the latter days at the very end of our current age just before divine intervention occurs. Russia, China and Iran are obviously probing for any evidence at all that the USA, under Obama, has any will left to resist their aggression. If you have not read Ezekiel 38-39 recently, I suggest that you do so. Then I urge you to read (or re-read) my article, What Ezekiel 38-39 Reveal about a Future World War III. This article explains why the alliance led by “Israel” in this prophecy pertains to the USA, NATO and its global allies. The term “Israel” in biblical prophecies applies not to the Jewish nation in the Mideast but rather to the modern descendants of the ten tribes of “Israel,” in biblical terminology. The Bible uses the term, “Judah,” when referring to the Jews/Israelis in the modern world (see Zephaniah 2, Zechariah 21 and 14), and the term “Judah” is never mentioned in Ezekiel 38-39. This future war is inevitable, as the Creator God has already decreed that it will be the very event at the end of our age which provokes him to intervene and personally take over control of the world’s nations. We Christians believe this prophesied Messiah will be Jesus Christ. That this prophecy in Ezekiel 38-39, inspired about 2500 years ago, could so accurately predict the details of the global alliances in the modern world, confirms that there has to be a Creator God. Only an almighty Creator God who lives eternally and who can guide the destinies of nations (Proverbs 21:1) could make a 2500 year-old prophecy come to pass today…and that is exactly the point that God himself makes in Isaiah 41:21-26 and 46:8-11.

The nations ignore God in their thoughts and decisions all over the world. They will be stunned when God begins to reveal his reality and the imminence of his divine intervention. That message will be delivered by two great prophets which the Bible foretells will arrive at the very end of our age to wield unprecedented divine power as part of their ministry. They are called the Two Witnesses in Revelation 11, and you can read many details about what the Bible foretells concerning their pending ministry in my article, The Two Witnesses. I urge you to read that article because the Bible also foretells that there will be two “phony” global leaders who will be energized by Satan and they will also be active at the same time as God’s genuine Two Witnesses. Both twosomes will do miracles and you will need to able to tell the “real deal” from the phonies. If you read my article about the Two Witnesses, you will understand the biblical evidence to be able to tell the difference between them.