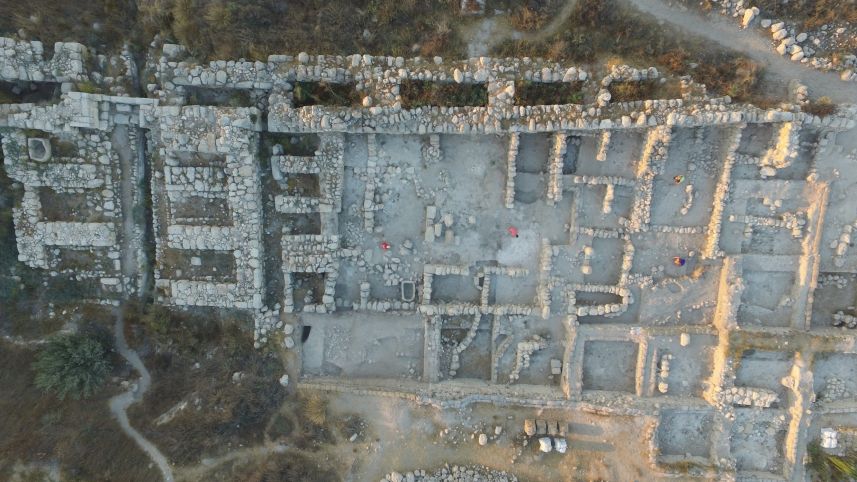 A remarkable discovery has been made at an archaeological site in the strata of ancient Israel. At the ruins of the old Philistine city of Gezer, elaborate and extensive remains of a major building complex have been found that date to the time of King Solomon of ancient Israel. The first link and second link offer the details about this discovery. The first link has an extensive analysis of the discovery, but you will likely have to wade through a variety of Internet ads to reach the article itself, as I did. It is well worth the effort to do so.

The first two links include not only an analysis of the find, but photographic evidence as well. As you can see, the constructions that date to the time of King Solomon are quite extensive and have very strong, ashlar-based foundations. One link notes that “only a ruler with vast resources and a highly organized and skilled workforce could afford” such extensive projects. The scale of the project also indicates that this huge project had to be built in a time of prolonged peace as well as prosperity, because the project would have required years of predictable stability free of war to undertake and finish so large a project. The rule of King Solomon included many years of stability, peace and great wealth, the prerequisites for making this discovered massive project possible.

I Kings 9:10-17 describes Solomon’s massive building projects. Besides building the lavish Temple of God and his own palaces, Solomon directed that massive building projects be undertaken at Gezer, Megiddo and Hazor. Verse 15 mentions that Solomon imposes a special “levy” (or tax) in his empire to finance his vast projects. [One interesting side note from this passage is that King Hiram of Tyre gave Solomon much help for Solomon’s projects and Solomon gave Hiram 20 cities in return. One of the cities was not pleasing to King Hiram and it was re-named “Cabul” meaning “displeasing” in my Bible’s marginal reference. When the Israelites were exiled into Asia, that name was relocated into Asia as well as various other Israelite/Hebrew names which are named in my books on Israelite history. The name of the Israelite/Phoenician city of “Cabul” survives to this day in the name of Afghanistan’s capital city, Kabul.] I Kings 5 records how extensive the Israelite-Phoenician cooperation was as they pooled their efforts into common goals. Solomon imposed conscript labor in the tens of thousands on his subjects to build his projects, which were not only extensive but manpower-intensive. I Kings 5:18 specifically mentions that stone quarries furnished many of the “prepared” stones that the builders used in Solomon’s projects. II Samuel 5:11 and I Chronicles 14:1 also record that stone masons sent by King Hiram of Tyre were heavily-involved with these projects. The third link adds that the famous Israeli archaeologist, Yigael Yadin, hypothesized that the Phoenicians were involved with the ashlar masonry at the major Solomonic construction sites, and the Bible flatly states their involvement was considerable.

Despite the fact that major empires have invaded and destroyed cities, buildings and artifacts on many occasions all over the old Promised Land since the time of King Solomon, the foundations of some of King Solomon’s projects were so massive and heavy that they were left intact. It speaks volumes concerning the effort and cost that went into these Solomonic-era constructions that later empires that were also rich and powerful thought it was too costly and time-consuming to even try and destroy these foundations. That is why they still exist to be discovered and dated today.

Obviously, this discovery affirms the accuracy of the biblical narratives about the time of King Solomon and the ancient Israelite empire. The full and thoroughly-documented history of the true greatness and scope of the ancient Israelite empire under Kings David and Solomon can be found in my printed books and the downloadable E-book available at my website. There are biblical “minimalists” who try to maintain that the Israelite empire never existed and that Kings David and Solomon never existed. They couldn’t possibly be more wrong. The discovery of the massive foundation stones for the buildings built by King Solomon at his biblically-designated sites are stark witness that the minimalists are completely wrong.

While King Solomon ruled well for many years under God’s blessings, Solomon forsook God toward the end of his reign (I Kings 11) and the united tribes/kingdom of Israel fought a terribly-costly civil war not long after his death (II Chronicles 13) that resulted in the two diminished kingdoms of Israel and Judah remaining in the remnants of the old powerful empire of Kings David and Solomon. Though Solomon is famous for his vast building projects, they also created such resentment among his subjects that it led to the northern ten tribes of Israel revolting against Solomon’s son, Rehoboam, in what was essentially a revolt against high taxes, forced conscription, etc. (II Chronicles 10).

The empire of the United Kingdom of Israel with its allies in the city-states of Tyre and Sidon constituted the famous Phoenician Empire that dominated the Mediterranean region, and formed colonies and trading ports all over the globe. Due to its rulers forgetting God and his laws, God’s blessings were removed from it and its time of global power was short. The massive constructions found at Gezer give witness to just how powerful and rich it was during its heyday.