Robots, Geminoids and the “Image of the Beast” 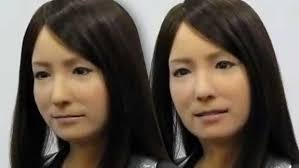 Many Christians have wondered what it was that the Apostle John saw in his vision of the latter days when he mentions the “beast and the image of the beast (emphasis added)” in the book of Revelation. I have also wondered and written about what is was that John may have seen. It is clear that the “image of the beast” is some kind of entity or thing which is different from the “beast” but looks like the final world leader called the beast. The “image of the beast” is a recurrent theme in the book of Revelation, as John mentions this cryptic term in Rev. 13:14-15, 14:9-11, 15:2, 16:2, 19:20 and 20:4.

I have wondered about holographic projections as the technology that could fulfill this prophecy. That is still possible, but now we have another high-tech virtual intelligence option that could also fulfill the prophecies about what John called “the image of the beast.” In the first link is described a new artificial intelligence invention or “robot” with a new twist. A “geminoid…looks exactly like an android but lets a user manipulate it and talk through it remotely” (emphasis added). This type of a robotic projection of an actual person allows the actual person to use a “brain-machine interface” that allows a real person to position or deploy a geminoid in a remote location from the actual person in whose image the geminoid is made, and then somehow the geminoid will channel the actual person’s words as if the actual person were speaking through his/her alter-ego “geminoid” self. The geminoid would also be able to project back to the actual person the image of an audience to whom the person was speaking remotely.

Think of the applications that this technology could have prophetically. Whoever is the eventual “beast” of Revelation could have hundreds (or thousands) of geminoid robotic images of himself sent all over the world to all the nations and speak to their leaders all simultaneously via the geminoids. This technology could be expanded to have the “image of the beast” also be present in all kinds of locations such as churches, synagogues, mosques, places of public concourse, stock exchanges, etc. all over the world to implement the orders of the beast and false prophet. As this technology is perfected, it may become impossible for listeners to know if they are speaking and interacting with the actual beast leader or one of his geminoid robotic duplicates. This new technology would surely be a way the prophecies about “an image of the beast” being present in the latter days as well as the beast himself could be fulfilled. It also is obvious that John would have had to describe such an ultra high-tech, image-projection system in the low-tech vocabulary of his time. If something like this develops, it will confirm that John really did have his visions about the latter days, and that he described technological wonders that we could not have imagined just a few short years ago. Indeed, the first link adds that we could be living in “a robot society in the very near future, in maybe three or five years.”

The second link describes how scientists and artificial intelligence designers are developing supercomputers whose digital brains will be able to “take over for entrepreneurs” (emphasis added) in business decisions of all kinds, and that an artificial intelligence being of some kind called “Viv” will be soon be unveiled which will be an “open-source and cloud-based personal assistant that will allow humans ‘to talk to the Internet’ and have the Internet talk back” (emphasis added). Am I the only one who finds this more than a little bit scary? How do we know that “Viv” will not become an electronic version of an Ouija Board? According to the article, “Viv” will be adaptive and get to know you personally and will be “privy to a person’s smallest details.” At what point will the “Viv” technology transition from a artificially sentient “personal assistant” to a robotic intelligence that will eventually control you and your behavior? I find the direction in which our high-tech “Brave New World” is going to be more than troubling. What if such an electronic and artificially sentient “assistant” becomes no longer an optional accessory, but a mandatory, government-assigned “assistant” to every person on the earth? I think this new artificial intelligence “personal assistant” should be called “V-I-K-I” (everyone who saw the movie, I Robot, will understand my reference.

I think the prophetic implications of this technology are obvious. A form of “Viv” could be assigned to everyone on the earth and quite literally spy on everyone in behalf of the beast system. That these technologies are being developed right now should give us a warning how close we are to the very end of our age when many biblical prophecies will be fulfilled.

If this troubles you as much as it does me, please forward this post to as many as you think would benefit from reading it. We do not know how long free speech will be present on the Internet where such things can be examined and exposed in a biblical light.