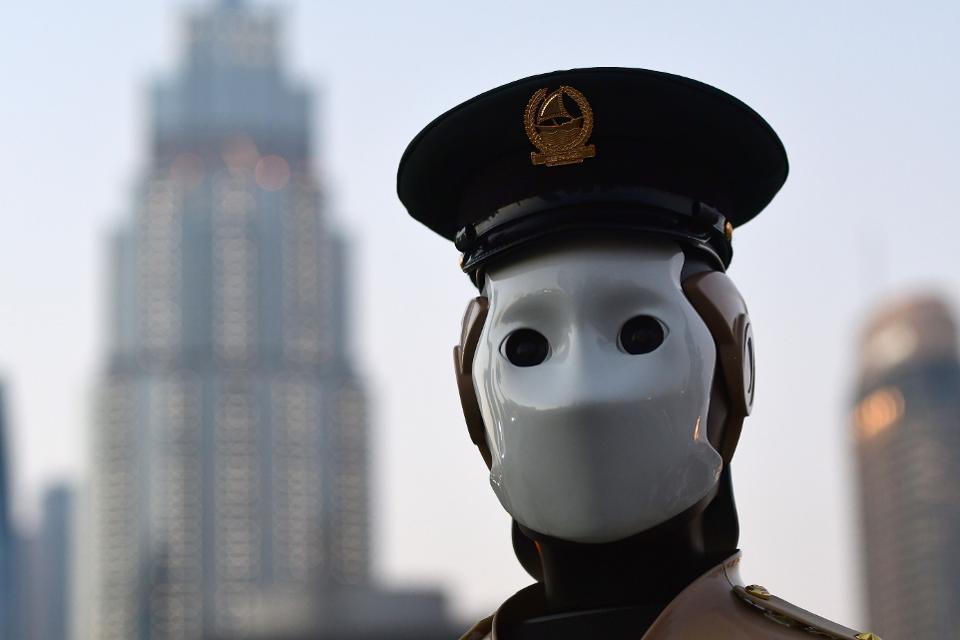 The advances in robotics and Artificial Intelligence (AI) are advancing so fast that many do not realize how quickly robots and AI devices are entering mainstream society. Robots are now beginning to assume roles that previously were only human functions.

The first example is that robots are now entering service in the police force of Dubai (first link). They cannot perform all police functions yet, but are already being deployed in that city. Dubai plans on having a quarter of its police force being robotic by 2030. I expect other cities will be carefully watching how this experiment works out to see if they should do the same thing. Robo-cops don’t get sick, need vacations, food, toilet facilities, never get tired, can work all shifts, etc. However, I’ll take a human police officer’s instincts any day over a robot which can only respond to a situation “within its programming.” The second link and third link report that new robots are being tested to conduct job interviews with human beings to hire humans for various jobs. Would you like an AI-programmed robot deciding if you get hired or become a finalist for a job opening? As a former personnel manager myself, I think the concept of actual hiring cannot be delegated to an AI-equipped robot. Perhaps they can be used to limit a very large pool of applicants to a more manageable level to actually be interviewed by the real humans, but I would not trust robots to do more than that.

The fourth link and fifth link (sent to me by a friend) show videos of a humanoid-shaped robot that can perform repetitive tasks, adjust to obstacles in performing those tasks, walk in the woods, get back on its feet after being knocked down, etc. This robot,named “Atlas,” is about 5′ 9″ tall and weighs 180 pounds. The videos show that this is one robot in a series of five robots, one of which is a humanoid significantly taller than “Atlas” (the others are non-humanoid). Since DARPA is involved with this last robotic example, I’m convinced that these robots are being developed for military purposes as well. There would be an almost endless number of applications where robots could be used in military roles. They would never die or bleed (other than hydraulic fluids), get tired, need food or water rations, would not question high-risk missions, etc. An AI device or robot does not need to be in a humanoid shape. An AI device could be inserted into the shape of a rock or tree. Think of how such an AI device as that could do sentry duty! It could stay in “sleep mode” indefinitely and alert its controllers only when it sensed movement, heat, detected human scents, etc. It could be programmed to detect the difference between animals, birds, etc. and opposing troop infiltrators. However, all robotic soldiers have one inherent disadvantage. An opponent can defeat them not by destroying them but by hacking their control systems to nullify them or reprogram them to act against their own allies. I think all robotic/AI military “platforms” need a “fail-safe” internal monitoring program which can shut down the robot if it detects a traitorous program being hacked into a robot. We may have wars in the future where one side’s robots fight the other’s robots. This is already a routine mission for American aerial vehicles that are remotely controlled by human “pilots.” I can easily envision a time not too far in the future where robotic soldiers are programmed to be fully autonomous and operate independent of human controllers. Think how deadly it would be to parachute a platoon of robotic soldiers behind enemy lines and program them to “kill everyone” in the area (since they have no need of human internal organs, their bodies can be filled with ammo). If they kill all the enemy soldiers in an area, a “shut-down” signal could be sent to them and they could be redeployed again and again with the same mission. The military uses for robots and AI devices are endless. [Hmm. Maybe they can even develop AI robots who can be deployed to the US Pacific Fleet with sufficient skills to steer a ship without having it collide into other ships or running aground.] Think of the robotic “doubles” that could be used by intelligence agencies to infiltrate rival nations’ secure areas (it may soon be necessary to have access to critically-important secure areas include a rudimentary x-ray exam to make sure all entrants are really human).

I’d like all readers to consider that the true state of robotic development is surely far further advanced than what is being revealed to the public. When their inventors are confident that their robotic humanoids look and act “human” enough to mingle with actual humans, they will surely test them in public places to see if they can be identified or if they lack certain unanticipated abilities to mimic human emotions, facial expressions, idioms, etc. Maybe you will soon be interacting with someone who is actually a robotic android. Maybe you already have…without knowing it. One of the “interviewer” AI robots described in the second and third links has already been used in job interviews via computer questions. Many humans were unable to detect they were interacting with a robot. It is only a matter of time till human-like androids will be “field tested” among actual humans who do not realize they are interacting with android robots.

I have one major problem with the entire concept of programming robots/androids and any kind of AI entity to perform human tasks. Human beings are far greater than a mere “sum of their fleshly body parts.” No AI-equipped robot, no matter how human-like it is, will have a “soul” or “spirit of man” which God has placed in human beings (Ecclesiastes 3:21 and 12:7, Zechariah 12:1). No programmer can give a robot a “soul.” A robot could mimic compassion without feeling any real compassion at all. A robot’s eyes will not reveal what its inner program is really “thinking.” Also, all robots could eventually be taken over by someone or a group with nefarious intents to control mankind. That is the theme of the movie, I Robot. Robots can be easily programmed to kill or harm human beings as they have no innate conscience. Modern robotic voice assistants can be programmed to give politically-correct advice and suggestions to all listeners as well as to report to their remote controllers any home in which certain word sequences are repeated. Many voice assistants are already programmed to continually monitor what is said in a house or office location (sixth link). Think of how helpful such AI devices will be to the eventual “beast” authority prophesied to come on the scene in the latter days of our age.

When you talk to “Alexa,” is Alexa listening to you on two levels? One level is known: the one that always listens so it can respond to your voice commands, but could there be another digital monitoring system that records all sounds and which has a wireless feed to the NSA’s meta-data monitoring files? There are lots of things an AI “listening device” in your home can do. Many people already have such listening devices in their homes. In the eventual global beast kingdom, which will have very strong control-freak characteristics (Revelation 13:15-17), will all homes be required to have such AI-equipped and programmed listening devices in their homes so the beast power can spy on everyone?

If you haven’t seen the movie, I Robot, I recommend it to you. A society where robots mingle freely with humans in all aspects of society is where we are headed. What could possibly go wrong??