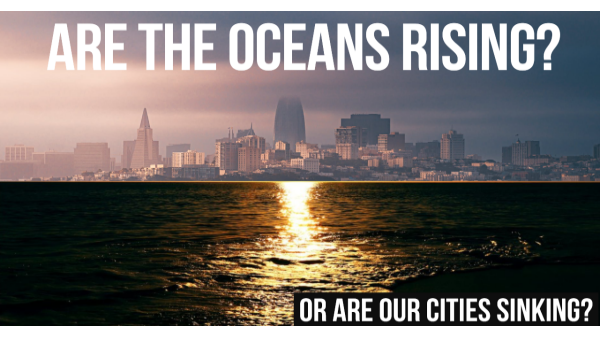 Missing from the alarmist cries of climate change crusaders that “global warming” is causing seas to rise and thereby endangering coastal cities is a key fact. This key fact is missing from almost all mainstream media stories about climate change. That missing fact is that it is scientifically well-known that many coastal cities are primarily not in danger due to rising seas, but rather to ground subsidence–in other words the ground under the cities is steadily sinking downward, and this trend is likely to continue no matter what happens to the level of the seas. Mankind can eliminate all the fossil fuels everywhere and it will have no effect whatsoever on the fact that many coastal cities are sinking into the ground.

Let’s look at one particularly-threatened coastal city–Jakarta, Indonesia. The first link and the second link document the fact that Jakarta is fighting back the sea primarily because the ground under the city of Jakarta is sinking. The city has sunk several meters already and it is now sinking at the rate of 25 cm per year. That is a rate of one meter every four years, which is an alarming rate. Jakarta is a city of 10 million people according to the first two links, but the third link states “greater Jakarta” has 30 million people. The needs for water for so many people is almost incalculable, and where is that freshwater coming from at present? Much of its freshwater is coming from pumping water out of the ground table underneath Jakarta, which means the ground is continually subsiding underneath the city. “Rapid urbanization” is blamed on one of the links for drawing so many people to Jakarta and placing such an over-demand on its groundwater supplies. Jakarta’s need to stabilize the height of the land underneath Jakarta will be served far better by building salt-water desalinization plants for Jakarta’s millions of people rather than telling the world’s nations to build fewer energy plants dependent on fossil fuels.

Jakarta is not the only coastal city which is sinking primarily due to ground subsidence rather than rising seas. The third link has a list of ten major coastal cities which are currently fighting invasive seawater levels. The link states that ground subsidence due to over-dependence on freshwater being pumped out of the water table under these cities is a common cause among these “sinking cities.” American readers will notice that New Orleans is the only American city on this list of the “top ten” sinking cities across the world. The fourth link examines the ground subsidence in Venice, Italy–the famous city which has always existed at the very edge of the sea. It is sinking at a much slower rate than Jakarta, but it is still steadily sinking due to ground subsidence. Bangkok, Thailand, another city afflicted by ground subsidence, was built on swampland according to the fifth link. It is also sinking into the sea, but one primary problem is the ground subsidence due to the city being sited on an unstable swampy base.

Virtually all coastal cities were originally sited due to factors of convenience, and not because they were being built upon stable bedrock surfaces. As these cities grew massively in population and industrialized, huge skyscrapers, roads, parking lots, airports, millions of vehicles, etc. added to the overall weight of these cities. When coastal cities existed prior to the invention of cars, planes, and steamships, the overall weight of these cities didn’t change much. However, with industrialization, inestimable amounts of heavy steel and concrete were built above the land on which coastal cities were built. Combining this increase in weight along with the sheer weight of millions of people (and all they possess) means the ground under these coastal cities is now bearing tens of millions of tons more weight than was once the case. Placing huge amounts of weight above porous soils contributes to ground subsidence. Having everyone in a coastal city change to electric cars would accomplish nothing because the collective weight of the electric vehicles will be about the same as the gas-powered vehicles already in existence.”

Soil subsidence is not merely a coastal concern. Many articles have been done about the serious problem of ground subsidence in the agricultural regions of California, for example. The cause is the same as for coastal cities–pumping too much groundwater from the soil–which steadily sinks the altitude of the soil as it compacts in on itself once the groundwater is removed. A post I did several years ago focuses on this problem in California’s interior agricultural region (sixth link). The problem of ground levels sinking in California still exists. The seventh link documents in a 2018 article that in some places of California’s agricultural region, the soil has sunk 28 feet since the 1920s and three feet in just the last two years! Global warming hasn’t caused any of this–it is the result of ground subsidence from pumping out too much groundwater. An article from 2015 also reports on California’s steady but relentless ground subsidence effects (eighth link).

Given the above facts about mankind’s siting of coastal cities, pumping out too much groundwater underneath them and building astronomically-heavy structures above rather porous soils, please remember these facts when you see environmentally-hysterical articles about “sinking cities.” Often, the problem is not rising seas from “global warming” but rather ground subsidence underneath the coastal cities themselves. According to the prophets of environmental catastrophes due to global warming and melting glaciers, coastal cities should have been swamped long ago and island nations should have disappeared under the oceans by now. Many of these alarmist reports are designed to aid the political agendas of Leftist/globalist political groups rather than report factual science. I saw one report on TV recently about the millions of tons of ice that were melting in the Northern Arctic regions, and why this means mankind must speedily adopt the political agendas of the globalist Left. That same TV report failed to mention that while millions of tons of ice are melting in the northern Arctic region (because of summer weather), millions of tons of water are being changed into ice in the Antarctic region at the same time (due to it being winter there).

The Creator God who made our planetary “terrarium” designed the seasons so that whenever ice was melting on one planetary pole, it would form at roughly the same amount on the opposite pole–keeping the water level of the earth’s oceans very stable over time. God himself asserted that his design of the earth’s overall ecosystem included limits on the degree to which the oceans could rise (Job 38:4-11, especially verses 8-11). Venice has existed at the very edge of the sea for centuries, and it has been at sea-level throughout the industrial era. Has it been evacuated yet due to “rapidly-rising” sea levels? No. Has any coastal city been evacuated yet due to rapidly-rising sea waters proclaimed for decades by the global warming prophets as being imminent? No. Have maritime nations existing on low atolls and islands in the Pacific and Indian Oceans been evacuated yet due to rising oceans? No.

Now you know the truth. The reason why many coastal cities have problems with advancing water levels is that the cities themselves are sinking downward due to ground subsidence/soil compaction. Throughout the entire industrial era of mankind, the seas have risen very little. If the oceans were truly rising at a rapid rate, Venice and other cities would have been evacuated long ago. The global warming crowd is foisting on mankind a pseudo-science that is really a kind of false globalist religion. Paul warned in I Timothy 6:20 that “science falsely so-called” would be a problem. His warning has come to pass.

God does allow the earth’s climate and geographical features (including sea levels) to fluctuate between a designed range of maximums and minimums that vary over short and long periods of time. However, I think factors involving the earth’s varying orbital distance from the sun and the earth’s own planetary axis in relationship to the sun during the seasons causes these maximums and minimums more than any of mankind’s puny activities on the earth. The global warming fanatics have long been warning that sea levels are rising rapidly. I see no reason to take them seriously. Will readers please let me know when Venice (and other coastal cities) are being permanently evacuated due to rising water? If that happens, I wonder if the mainstream media will report on the role of ground subsidence in causing any such evacuations.

We were warned that “false prophets” would be common in the latter days of our current age on earth (Matthew 24:11). A number of these false prophets can be found in the crowd that is endlessly warning about “man-made global warming” and “rapidly-rising sea levels.”