Revealed: the US and UK Have Spied on the Israeli Military for 18 Years! 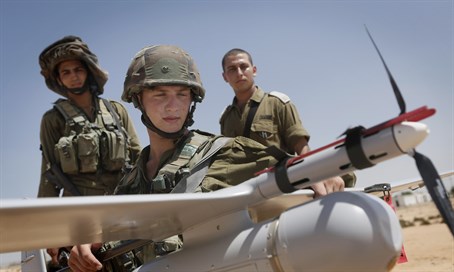 Where did the Israelis learn about the mass spying by the USA and the UK on Israeli military intelligence operations? The first link reports that the Israelis learned about this spying operation via the documents brought to Russia by Edward Snowden. This strongly infers that it was the Russians who informed the Israelis about the American and British spying on Israel because it was to Russia that Edward Snowden brought America’s top-secret information files from the super-secret NSA. Who else could have released the information to the Israelis but the Russians? The second link gives the reaction of an Israeli cabinet minister to this stunning revelation. The links also note the hypocrisy by the American government in imprisoning Jonathan Pollard, an American Jew who spied for Israel many years ago, all the while the USA was spying on the Israelis on a scale that made Jonathan Pollard’s spy efforts quite small in comparison.

This revelation can only result in a massive breach of trust between the Israelis toward the Americans and British. Doubtlessly, the Israelis will go on a top-to-bottom internal effort to determine everywhere the Americans and British have been spying on the Israelis for the last 18 years. It is possible that Israel will cease sharing intelligence information that it gathers with the Americans and British over this very invasive breach of Israeli military intelligence actions by the Americans and British. That this massive spying on Israel has been going on for 18 years means that it has been occurring over the presidencies of both Republican and Democrat administrations. I wouldn’t be the least bit surprised if the executive branch of the US government totally hid this spying effort against Israel from the US Congress. This should infuriate Congress which is filled with pro-Israeli members. It also begs the question: what else has the US executive branch been doing over the last two decades about which it never told the Congress? It also begs another question. Given the very cozy relationship between the Obama administration and the Iranian government, has the Obama administration been sharing Israeli military secrets with Iran for years?

That this revelation reveals that both the Americans and British have been secretly spying on the Israelis on a massive scale for so long triggers a thought in my mind. The USA, the British, the Canadians, the Australians and the new Zealanders (all the Anglo-Saxon nations of the world) have been operating their private spying network called project Echelon for many years (see third link). [My books identify these nations as the modern Israelite tribes of Manasseh and Ephraim.] It may be that Edward Snowden’s intelligence trove brought to Moscow included all the activities and files of Project Echelon known to the NSA that these five Anglo-Saxon nations had accumulated over the years. If so, it means that all the intelligence files of Project Echelon may have been compromised and handed by Edward Snowden to Russia.

This revelation will likely shatter the trustworthiness of American and British intelligence agencies and the officials of both governments in dealing with all other nations in the world. If the Americans have been spying on their closest ally in the Mideast so blatantly, secretly and thoroughly for 18 years, all other American and British allies will wonder about the extent to which their own nations have been spied on as well.

Whatever is said publicly about this scandal, one can assume that Israeli-American and Israeli-British relations will go into the deep freeze for some time. I also think that this revelation will hasten the growing alliance between the Israelis, Saudis, Egyptians and Jordanians (and perhaps other Sunni nations) as they make common cause vs. Iran. All these nations will doubt whether they can trust anything that the Americans or British say or do.

Who is the big winner in this? The answer is easy. It is Russia. It is using the treasure trove of the NSA’s secrets that Edward Snowden brought to Moscow to sow division among the members of the western alliance. We know only a little of what Russia is revealing to other nations about what it now knows the NSA and other US intelligence agencies have been doing for decades against the rest of the world. Russia may be selectively and secretly leaking very damaging information about America’s secret actions to the rest of the world’s governments in an effort to undermine America’s leadership role in all political and financial matters around the globe. Indeed, the information being leaked to governments around the world from Russia’s trove of America’s NSA secrets (courtesy of Edward Snowden) may lead to the actual fulfillment of a biblical prophecy. Revelation 17-18 prophesy that the global dominance of the latter-day political/financial/monetary system called Babylon the Great will collapse spectacularly at some point. The damage done to America’s credibility and respect in both political and financial matters may lead to a large group of nations (called the “seven heads and ten horns” in Revelation 17 to overthrow American and British global political/economic/monetary dominance in a coordinated action. To learn more about how Revelation 17-18 will likely be fulfilled in our foreseeable future, please read my free articles, Is Babylon the Great about to Fall…Ushering in a Global Beast System, and The Babylonian Origin of the Modern Banking System. The latter article will make it clear how apt the Bible is in referring to our modern central-bank controlled global financial system as “Babylon the Great.”