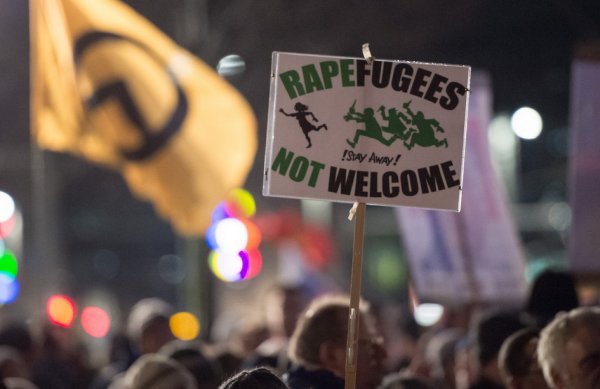 Media reports indicate that the crisis caused by Islamic immigration into Europe is still growing. Crimes committed by the immigrants are making a bad situation rapidly worse throughout Europe. The first link reports that there is a growing backlash in a number of European nations caused by the sexual attacks of these immigrants against European women. The mass attack in Cologne, Germany was the worst one reported, but it is not the only one. Such attacks were also reported in Finland and Austria, and Finnish police reported they had prevented a sexual assault by immigrants on New Year’s Eve. The first link, from the New York Times, also reports how sexual assaults against European women (or the fear of them) are changing the political and law enforcement landscapes.

The second link reports that Germany is making it easier to expedite deportations for the immigrants who commit crimes. The first link reports that in Finland, local groups, calling themselves “Soldiers of Odin” are now patrolling some Finnish neighborhoods to protect Finnish women from attacks by Islamic immigrants/refugees. It is axiomatic that if governments refuse to perform protective roles that they are responsible to provide to their citizens, then the citizenry will form its own groups to provide such protective services. That is beginning to happen in Finland already. Many governments in Europe are still crippled by a politically-correct perspective that blinds them to the growing dangers posed by the tidal wave of Islamic immigrants coming into Europe where those immigrants are unwilling to assimilate into European culture and norms. If they try to impose their Islamic culture on Europe, there will much greater problems in the future. Indeed, the EU itself is starting to splinter as nations take actions independently to protect themselves and the EU bureaucracy is simply looking irrelevant.

Denmark has proposed a radical new action to help pay for the costs of the Islamic immigrants. Denmark is proposing to seize all wealth brought into Denmark by immigrants in order to help the state pay for the costs of having them in the nation (third link). The measure would exempt some personal items such as wedding rings, but otherwise this is a draconian new action by a European nation which should deter immigrants from heading into Denmark. Indeed, that may be one of its purposes. How many Islamic immigrants will want to come to Denmark if Danish border police loudspeakers say to them: “Line up and put all your money, gold, and valuables into the designated bins as you walk into Denmark. You will then be directed to an internment camp where your valuables will pay for your collective needs.” If immigrants start avoiding Denmark because of such an action, there will also be less immigrants coming into all of Scandinavia as the major bridge that connects Denmark and Sweden is the connection point between mainland Europe and Scandinavia. It will also mean that the numbers of Islamic immigrants initially headed toward Scandinavian locations will start to accumulate rapidly inside Germany. That will create new problems.

The immigrants have already worn out their welcome in Germany, and a recent poll shows that 62% of German people are now saying that “there are too many asylum seekers in the country.” That number has risen sharply from the previous poll which showed 53% of Germans had such a viewpoint (fourth link). Germany’s Chancellor Angela Merkel has arguably been the most outspoken European leader in favor of letting huge numbers of Islamic immigrants into Germany and Europe. That her view is now opposed by a landslide number of Germany’s voters is a fact that will be noticed by all German politicians. Angela Merkel’s days as Chancellor of Germany may be numbered.

Many religious prognosticators and commentators have had all kinds of differing opinions and forecasts about the role of Europe in biblical prophecy. Some expected the EU to coalesce into a kind of federal “United States of Europe.” As more nations ignore the EU in an effort to safeguard their people from Islamic immigration, such an outcome seems increasingly remote. Indeed, the EU could literally come apart. On the other hand, those who expect a “beast” and “false prophet” leader to emerge from within Europe perhaps may take heart from the ferment inside Europe and the rapid rise of rightist, anti-immigrant parties in European nations. The threat to traditional European culture posed by a wave of Islamic refugees who want to impose Islamic culture on Europe is causing many Europeans to now be moved to defend their traditional European cultures in a more forceful way. I won’t make any predictions about how this is all going to unfold, but the situation bears close scrutiny.

There is one obvious solution to the problem that I have been surprised to see is not being discussed. The waves of Islamic immigrants coming into Europe are pouring into Greece from Turkey across the Aegean Sea. The Greek Isles in the Aegean Sea are technically “European” soil even though none of them are contiguous with the European land mass. The Greek Island of Lesbos is regularly in the news as a landing point for the Islamic immigrants coming from Turkey in their often-flimsy boats. Turkey is obviously cooperating in this exodus or it would not be happening. Why have the European nations not been more active in getting the Turkish government to stop the Islamic immigrants from using Turkish soil to launch out toward Greece via the Aegean Sea? There is another factor which is not being talked about at all.

Remember when Greece was being crushed under harsh economic austerity measures by the IMF, the EU, and especially by Germany and its leader, Angela Merkel? The last link hearkens back to that time and it cites a threat by the Greek Defense Minister that in retaliation for the harsh austerity measures forced down Greece’s throat by Germany and other nations, Greece would unleash a wave of Islamic immigrants into the other European nations which had treated Greece so harshly. Greece has been true to its word. It is, indeed, taking in a wave of Islamic immigrants and sending them into Central Europe, especially toward Germany and it is becoming an insoluble problem for Angela Merkel’s government. There is a biblical principle that we “reap what we sow.” Germany “sowed” a very merciless financial package on Greece, causing suffering all over the nation of Greece. I recall Greek cartoons shown in the media depicting Angela Merkel with Hitler’s mustache. Now Germany is “reaping” a tidal wave of Islamic immigrants and this is causing increasing suffering all over the nation of Germany, and that suffering is relentlessly coming via Greece, the nation to which German chose to show no mercy. Angela Merkel’s policies caused pain all over Greece, and now Angela Merkel’s policies are causing pain all over Germany. It looks like the biblical principle of “reaping what we sow” is still in effect….or as some non-Christians might put it: “Ain’t karma awful.”

This crisis is getting steadily worse and it is nowhere near a solution. Meanwhile the Islamic immigrants keep coming into Greece from Turkey and they are routinely sent northward, mostly toward Germany. A powder keg is growing inside Europe.