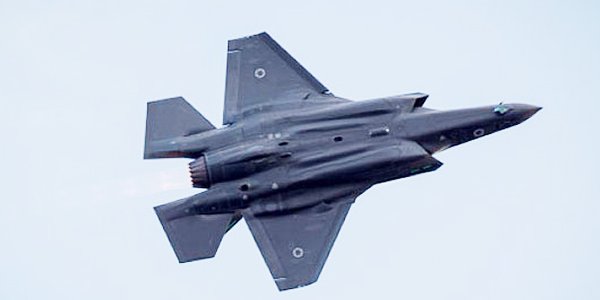 A few media sources have reported that new Israeli F-35 warplanes have already flown deep penetration air missions into Iranian airspace to reach locations associated with Iran’s nuclear and missile programs, and I thought readers would appreciate knowing about these reports (first link and second link). According to these links, the state-of-the-art Israeli F-35s obtained from the USA were able to penetrate both Iranian and Syrian airspace without being detected. This is of vital importance as it would mean that the F-35s can defeat the ability of the Russian supplied air defense systems in Syria and Iran to detect or track the new F-35s. Since Iran has long ago proclaimed that it wishes to “wipe Israel off the map” and has also supplied much military hardware to Hezbollah in southern Lebanon as well as positioned Iranian forces inside Syria to confront Israel, I think the Israelis just sent a message to the mullahs running Iran that many sensitive Iranian installations will be destroyed if Israel has to launch either a pre-emptive or a retaliatory strike vs. Iran.

The first two links also offer another important bit of information. They state that the Israeli F-35s could fly, un-refueled, twice as far as the distance they flew into Iran. This is important as it means that other nations who have helped Iran with its nuclear and missile programs are well within the reach of Israeli warplanes if Israel decides to strike the nations which have assisted Iran with its annihilationist ambitions against Israel. Such nations would include Russia and China. Of course Israel does have an aerial refueling capability for its warplanes so who knows how far they can fly if ordered to do so? Nations who thought they could secretly help Iran’s nuclear and missile programs for profit may find that their factories can also be hit with retaliatory strikes by Israel if an Iranian-Israeli war does occur.

Speaking of Israel’s aerial refueling capability, the third link and fourth link report this capacity was involved in an aerial mission several years ago about which little was reported in the mainstream media. The USA conducts periodic Red Flag aerial combat exercises in the American West in which American and allied warplanes fly against “aggressor” squadrons who are equipped to simulate Russian bloc warplanes. These hone pilots’ skills in case a real war breaks out and it also increases the ability of US pilots to fly war missions with allied air force personnel. In a recent such Red Flag exercise, both Israeli and Jordanian warplanes participated as US allies. What I find remarkable is the fact that Israeli and Jordanian air force planes flew together from the Mideast to the western USA, and that the Jordanian warplanes were refueled en route by Israeli tanker aircraft. This reveals to me that the military cooperation between Israel and Jordan is closer than most people have realized. The links also report Egypt has participated in the Red Flag exercises. These reports convince me that close military cooperation is occurring between Israeli and Sunni Arab governments as both are increasingly threatened by Iranian Shiite threats and militarism. This report also indicates to me that if Israeli warplanes need to make combat attack missions against Iranian sites, they will likely not be going alone. Other nations’ warplanes could be accompanying them, and Israeli aerial tankers can bring them all back to their home bases.

As I’m sure readers realize, the regime of former US President Obama negotiated an agreement which allowed Iran to proceed almost unfettered in developing advanced nuclear and missile technologies. If Iran develops its technologies too far for Israel’s level of tolerance, deep penetration strike missions may be carried out against the Iranian sites at which such dangerous development is occurring. If Iran cannot detect Israeli F-35s, then the world may someday awake to hear that “unexplained” explosions have occurred at a number of Iranian nuclear/missile development sites. It could be written off as a series of unfortunate “accidents.” Who will ever know that the truth may be something else?