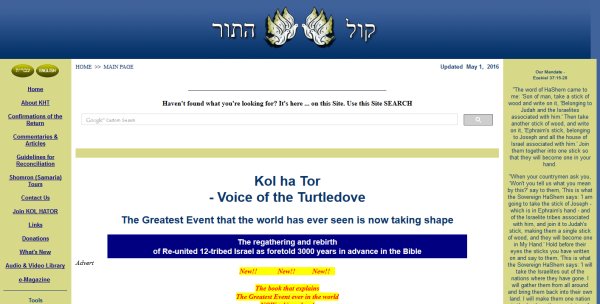 This post is for the purpose of recommending a Jewish/Israeli website to readers. The organization (see first link) is named Kol Hator, and it is dedicated to reaching out to the modern ten tribes of Israel with a goal of promoting mutual recognition and cooperation between the modern house of Israel (the ten tribes) and the house of Judah (the Jews). This is a goal that I heartily support as I have worked for decades to promote such ties and cooperation in my books, writings, audio messages, etc. I have spoken with Mr. Avrahami OvadYah, a leader of the Kol Hator organization, on the phone and we have much common ground on matters involving the ten tribes of Israel and the need for mutual recognition and cooperation between all the tribes of Israel. Rabbi Avraham Feld, one of Rabbis involved with Kol Hator, is a friend of mine who I met in my August 2000 trip to Israel and I  have the highest regard for him.

Obviously, since Kol Hator is an Orthodox Jewish organization, you will see Jewish perspectives at their website, but Christians will likely be pleasantly surprised to see that their website does address New Testament themes and Christian issues as they seek to promote unity on common ground among Christians and Jews in the modern houses of Israel and Judah. Another trait of Kol Hator is that it promotes Christian and Jewish interactions re: the ten tribes of Israel with a commitment to each group not proselytizing the other to promote maximum cooperation.

Kol Hator is also sponsoring a Conference in June (next month) in Jerusalem devoted to promoting cooperation between the modern tribes of Israel, and creating a forum for like-minded people to get to know one another and begin pooling efforts to pursue common efforts involving the modern tribes of Israel. I was invited to speak at the Conference and participate in it, and I would have loved to be present in Jerusalem to be there for the Conference. However, my doctor has advised me that my health situation does permit me to make such a trip and, unfortunately, I have to concur with him. Indeed, I have been unable to make a plane trip to speak to a live audience in another American city for the last nine years, so a long International trip is outside my current health capacities. I still retain hopes that God will yet grant me the healing necessary to make such trips and speak to live audiences again in the future (and I would appreciate your prayers to our Creator to ask him to give me the necessary healing to make this happen).

The second link is a Facebook link to access Kol Hator materials. I urge anyone who can attend the conference to do so, as I believe you will find it a rewarding experience! If I had the health to be there, you would have met me at that Conference!