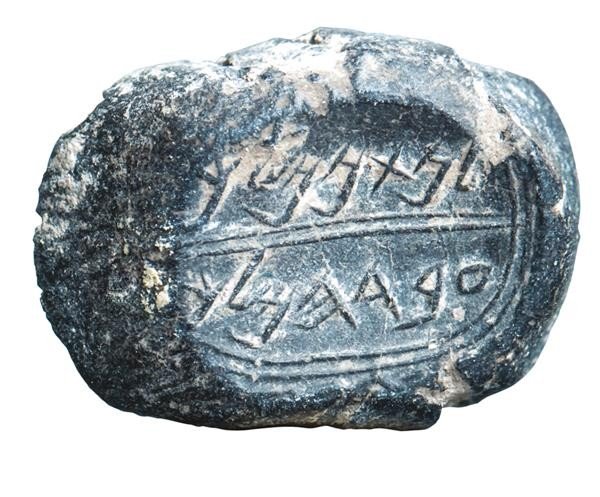 Sometimes very small things can convey a great deal of importance. This post involves some very small items, discovered in archaeological digs in the Holy Land, that offer support to the accuracy of biblical historical narratives, and I thought readers of this blog should know about these discoveries.

In ancient times, it was a common practice for royal or important persons to have a “signature seal” which made a document or object of some kind “official” when it was stamped with the seal of someone embedded into wax, damp clay or some substance that would preserve the official seal-mark of an ancient official or person. You have likely seen this action taken on movies that involve ancient kings or important officials. In archaeological digs, either a seal or the impression of a seal can be found which offer an insight into whoever owned and used that seal. Several, such seal impressions, have been found, in the Holy Lands, which have the names of biblically-mentioned personalities in ancient times. The first is a seal impression of a court official in the ancient kingdom of Judah named “Nathan-Melek” or “servant of the King” (first link and second link). These links report that it was found in a large, ancient public building which had been burned near the date of the destruction of Jerusalem by the Babylonians circa 586 BC. The burned building in which this seal impression was found is located in the City of David in Jerusalem and it was found in strata that dated to the time of the Babylonian invasion and conquest of Judah. Nathan-Melek is mentioned as an official in the government of Judah in II Kings 23:11, so it would be altogether appropriate for him to have an official seal with which he would mark documents or objects. Both links indicate that it isn’t absolutely certain that the seal impression belongs to the Nathan-Melek mentioned in the Bible; however, since it was found in exactly the location in ancient Jerusalem where we would expect Nathan-Melek to live and it dates to the strata of the destruction and burning of Jerusalem when Nathan-Melek lived there, I think it is highly likely that it belonged to the Nathan-Melek mentioned in II Kings 23:11. How many people named Nathan-Melek who were “servants of the king” would there have been in King Josiah’s ancient administration? It is unlikely that there were more than one.

In this post, I’d like to point out the Bible gives us information about another fire that may have caused the destruction of the building in which Nathan-Melek’s seal impression was found. While it could easily have been the Babylonians that burned this ancient public building in Jerusalem, the fire may have been set by King Josiah himself. Josiah was a righteous king who implemented widespread reforms throughout the kingdom of Judah to restore the proper worship of the God of the Bible and to destroy or burn all pagan idols and symbols. Josiah was very zealous in destroying and burning pagan objects and locations, as II Kings 23 records. Nathan-Melek is identified in verse 11 as the “chamberlain” whose official chamber was near the house of the Lord (the Temple) in Jerusalem (this title was given to him in the King James Version of the Bible–other translations use other titles). However, that same verse identifies Nathan-Melek as apparently living “in the suburbs” of the city. He is mentioned in connection with Josiah’s burning of “the horses” and “the chariots of the sun” that previous apostate kings of Judah had placed at the entrance to the Temple of God. The sun-god was often depicted in the pantheons of ancient religions as riding in a [sun] chariot pulled by horses. The Greek depiction of Apollo shows him in this manner–riding in a chariot pulled by horses. A sun-god image like this was placed at the entrance to the Temple–which greatly provoked the Creator God to anger. Indeed, God was so angry that he had already determined to destroy the kingdom of Judah and send its citizens into exile, but the righteous intentions and actions of Josiah led God to delay his judgment until after the reign of Josiah (II Kings 22-23–see especially II Kings 22:15-20).

The seal impression of “Nathan-Melek” was found in a location associated with Nathan-Melek which was very close to the Temple of God where the biblical Nathan-Melek served. It is not altogether clear whether Nathan-Melek was a faithful servant of Josiah whose assigned quarters were near the Temple or whether he was an apostate official (appointed during the reigns of previous evil kings of Judah) whose responsibilities included the upkeep of the idolatrous sun-god chariots and horses.  II Kings 23:11 does say these idolatrous chariots and horses (and surely all the paraphernalia that were associated with them) were “burned.” This had to be a hot enough fire to burn all the wood and melt all the metals that were part of the chariots and horses. This raises the possibility that the fire that burned the house in which Nathan-Melek’s seal impression was found was lit by King Josiah whose great burning of idols and their artifacts is recorded in II Kings 23:11. Of course, the fire could have been set just as easily by the Babylonians who later sacked and destroyed the ancient city of Jerusalem. The third link offers photographs of this seal impression as well as photographs of and information about other seal impressions or seals found in the ancient Holy Land.

The fourth link offers information about a seal impression mentioning an “Adoniyahu,” a name associated with several biblical figures, the most important of which was an Adoniyahu who was a son of King David, and therefore, a prince of the kingdom of Judah and/or the United Kingdom of Israel under David after King Saul’s death. This son of David is mentioned first in II Samuel 3:4, and he later became the primary rival to Solomon to inherit the throne after David’s death.  That narrative is found in I Kings 1-2, which ends with the death of Adonijah at Solomon’s command. It cannot be known whether the “Adoniyahu” whose name is mentioned in the fourth link is the same as David’s son, Adonijah (as his name appears in the King James Version of the Bible), however, it may be possible. As a high-ranking prince under David, Adoniyahu would surely have had a seal with which to make impressions. Objects or documents containing his seal would have likely been widespread. Some of these would have been kept as important seals of possession of land or objects (or judgments rendered) for generations. The fourth link states it was found in Jerusalem and dates to the 7th century BC. The article does not state whether that date is based on the strata in which it was found, some aspect of the script or some other factor.  Since it was found in Jerusalem, it may have been found in a 7th century BC, setting, but it may also have been made long before that and found in modern times in a seventh-century setting. In the modern world, we have a widespread collectibles business and signatures of famous people are especially prized. Ancient civilizations must have prized collectibles as well. Any seal impression made by Adoniyahu, the son of David, would have been valued as a collectible in ancient Israel, especially since he was so prominent that he almost became king over all Israel instead of Solomon. Did someone in Jerusalem have it in his possession in the 7th century BC as a collectible even though it was originally made during David’s reign? It is a fascinating possibility to consider, but the actual identity of the Adoniyahu who made this particular seal impression is unknown. The fifth link adds more information about this “Adoniyahu” seal impression, and it also mentions a seal impression which may have referred to the biblical prophet, Isaiah.

All of these seal impressions give support to the Bible’s narratives as the names of identifiable historical persons are consistent with biblical names and in the correct biblical locations. The linkage between the recently-found “Nathan-Melek” seal impression and the official of that name in King Josiah’s time is especially convincing in my view.

[PERSONAL NOTE: Long-time readers of my blog know that I have occasionally updated readers regarding my personal circumstances. This is one such occasion. I’ve been having increased pain, stiffness and unresponsiveness in my fingers, hands, and wrists while at a keyboard–especially in my left hand. After a series of medical tests, it was clearly indicated that I have carpal tunnel syndrome in both hands, with the left hand being more affected. This is undoubtedly the result of millions of keystrokes being typed by me using my fingers and hands in a “hunt and peck” method which has long distributed the keyboard work unequally among my hands and fingers. There are some non-surgical options which will be tried before surgery is considered. The first treatment options are rest and the use of a small TENS unit on the hands and wrists. In the past, I have typically posted approximately every third day or so, but will now adopt a schedule of posting perhaps every fourth day. I will also have to reduce my emailing time so my emails will be fewer and shorter in length to abide by my “doctor’s orders” to rest my hands to try and resolve the carpal tunnel symptoms without surgery. Prayers of readers would be appreciated so this condition is healed without any need for surgery.]