READY FOR MECHANICAL IMPLANTS TO BE PUT INSIDE YOUR BRAIN? 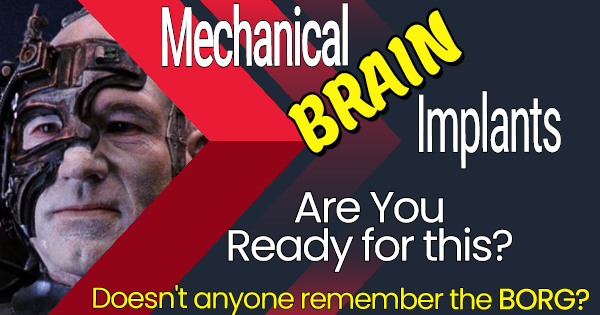 Don’t think that the title of this post is for a time far into the future. It is for the current time in mankind’s history. Billionaire Elon Musk has founded a company, Neuralink, which is dedicated to creating tiny mechanical implants which can be implanted in human brains and which can be connected via “ultra-thin wires” to key portions of your brain tissue (first link). This plan to insert tiny computer chips into your brain is already heading toward the implementation phase. The title of the first link is “Musk wants YOU to build, a brain-computer interface.” No, he does not want you as an engineer to design such a system; he has plenty of engineers. He wants you as a guinea pig to allow your brain to be penetrated and altered by mechanical chips and wires to see if an enhanced human-machine interface system can be created and made workable. Allowing scientists to insert experimental systems of inserted computer chips and wires into people’s brains to alter the way they “think” and process information. What could possibly go wrong?

The first link points out that “hooking a brain up directly to electronics is not new,” but publicly-acknowledged examples of this are generally limited to medical situations such as treating seizure disorders, Parkinson’s Disease, etc. However, Musk’s new company is developing technology to merge micro-machines or nano-technology into healthy human brains so we can “keep up” with Artificial Intelligence (AI) devices. Musk’s company is not the only one devoted to this brain-enhancing technology. The first link mentions another high-tech company that is designing “‘advanced neural interfaces to…extend cognition.” Hmm. Is that a technical way of saying ways are being sought to boost the human brain into becoming a “better organic computer” by merging it with mechanical devices? The first link also mentions Facebook CEO Mark Zuckerberg has a company that is trying to “transform the way we interact with devices.”

Where will this all lead? Is it fair to say that in a matter of years we will have implantable computer devices inserted into our brains at birth to be “hard-wired” to every human brain? With wireless transceivers as part of these mechanical brain implants, could we reach a society where Alexa-like devices would be implanted in all human brains telling us what to do, what to think, how to vote, etc? If all humans had the same transceivers implanted into their brains and bodies, humanity would become much like the Borg of Star-Trek fame. The Borg were a race of “assimilated” physical beings who had lost their individuality due to the micro-devices and mechanical appendages implanted into their bodies to serve the collective consciousness of the entire group. That sounds like a very scary future, to me. However, Genesis 11:6 warns that mankind can at times reach tipping points of technological development where “nothing will be restrained from them which they have imagined doing.” I think we are at such a tipping point today. Mankind imagined flip-phone communicators in Star-Trek episodes and the flip-phone was invented. Replicators were imagined in Star Trek plots and we now are developing ever-more sophisticated 3-D printers. Cloaking/invisibility technology was imagined in Star-Trek plots and mankind has now developed such cloaking fields. Mankind has imagined the Borg in Star-Trek episodes and now mankind is developing tiny computer chips to interface with human brain cells via ultra-thin wires. Since mankind has been duped into thinking it evolved and is blind to the reality of a Creator God who will judge each human for his/her actions, there are no real moral constraints on human scientists any longer concerning what they can and cannot develop and do. The godless elites can now seek to impose their will on the rest of mankind.

The second link includes an illustration of how a mechanical insert could be connected to a human brain and describes how these human-machine interfaces could also be “connected to an external computer processing unit.” Star-Trek fans will doubtless recall episodes where Data, the humanoid android had his mechanical brain periodically connected to external computer processing devices. While left unaddressed in the links, could scientists already be attempting to build mechanical “androids” with a mix of organic/mechanical brains and bodies? We need to keep in mind that experiments and technologies now being hidden behind closed doors are almost certainly far more advanced than what is being acknowledged or released publicly. Any conceivable type of experiment could be conducted with androids under construction. Since they are not legally real persons, nothing done to them can be inherently illegal. Any experiments done with android technology could be classified as mere experiments in “AI platforms.” The second link also reveals that tests like the ones described in this post have already been done with mice and apes as test subjects, and that tests conducted upon live humans were expected by sometime in 2020. That is our current year, so such tests as described above may already be underway. I do not find that to be a comforting thought.

Mankind is now proposing and developing ultra-high-tech projects unimaginable just a few years ago. The Bible predicted a very high-tech society would exist on the earth just prior to the end of our age and the beginning of the Messianic (Divine) Age. Daniel 12:1-4 concerns events on the earth at the “time of the end” of this age. Verse 4 predicts that rapid transportation of all kinds will be available to the masses and that “knowledge shall be increased.” A careful examination of the underlying Hebrew word used shows that an exponential increase in knowledge was prophesied in Daniel 12. The word translated “increased” is the same Hebrew word used in Genesis 7:17 to describe how the waters “increased” on the face of the earth when all land surface on the planet was submerged. Clearly, it means a similar exponential increase in knowledge will occur in the end times described in Daniel 12:4. A vast increase in mankind’s knowledge is one of the prophesied factors described in the Bible to identify that the latter days of this age have arrived. This prophecy has been fulfilled as have many other prophecies pertaining to the latter days of our age. To see an in-depth examination of the Bible’s latter-day prophecies, please read my article, Are We Living in the Biblical Latter Days? If you read this free article, you will have no doubt that the answer is “yes,” and that the Bible had to be inspired by a Creator God to be so incredibly accurate in its prophecies about our modern time.