RASH OF LARGE PACIFIC RIM QUAKES; IS “THE BIG ONE” IMMINENT? 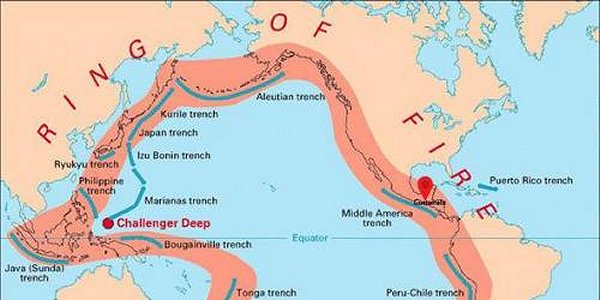 For years, there has been a worry about when “the Big One” will hit somewhere on America’s West Coast. The West Coast of the USA is part of the Pacific “Ring of Fire” earthquake zone which produces a very large percentage of the planet’s earthquakes and many of its major, damaging quakes. Indeed, there have been so many discussions about this topic that I think many people have forgotten that this is a very real danger. A development has occurred which raises the possibility that a major quake somewhere along the Pacific Rim zone could occur soon, and I wanted readers to be aware of it.

One source has reported that “53 major quakes” occurred along the Pacific Rim fault line system within just 24 hours (first link). It defines a major quake as one which is 4.5 or higher on the Richter Scale. The largest quake was an 8.2 quake that occurred near the Fiji region of the South Pacific Ocean. A major media network, Fox News, ran a story that “69 massive earthquakes” hit the Pacific Rim region within 48 hours (second link). That is a lot of earthquakes, and it does raise concerns that these could be regional foreshocks that are leading up to a truly big earthquake. However, movie plots notwithstanding, scientific predictions regarding earthquakes is still an inexact discipline. No one, to my knowledge, can predict earthquake intensities, timings or locations. If a “Big One” is going to strike the Pacific Rim region, we do not know where it will strike. What is known is that so many earthquakes have happened recently in the Pacific region that even major media sources are now wondering if a “Big One” is imminent.

While no one knows when or where the next “Big One” will hit a populated region of the famous “Ring of Fire,” the USA Today earlier this year offered some thoughts on the likelihood of a major earthquake hitting California in the near future (third link). Their report does indicate that a major quake is now overdue. The last truly major earthquake that inflicted massive damage on a West Coast city was the 1906 quake which devastated San Francisco. Even an earthquake that is a large one but less powerful than the 1906 quake could inflict massive damage and a large number of deaths on any populated city that it hits. In this modern era of “just in time” delivery of goods and products, a truly major earthquake (or any other kind of major weather disaster) could so tax the regular supply streams of the USA’s distribution system of basic foodstuffs, medicines, etc. that resources would need to be diverted away from their normal destinations to the impacted city to save lives and treat the wounded. Americans, accustomed to having a steady supply of everything we want at all times, would be very surprised to see what types of necessities would soon be in short supply very quickly if the federal government had to forcibly re-route thousands of trucks carrying basic supplies from their normal destinations to a major metro area hit by a large earthquake.

In Matthew 24, Jesus’ disciples asked him about the signs that would indicate his return is drawing near. One of the signs that he pointed to was “earthquakes in various places” (verse 7). Since there have always been a certain number of earthquakes around the world throughout our planet’s geologic history, Jesus Christ’s prophecy would seem to indicate that earthquakes would have to come more frequent and/or more damaging in order for his prophecy to have significant meaning. Given the limitation of the Gospel accounts’ discussion of Jesus’ wording on this matter, I think we can deduce that his prophecy would include all kinds of tectonic events (earthquakes, volcanoes, tsunamis) when the word “earthquakes” is used in Matthew 24:6. We should also be mindful that the wording of Matthew 24:6 that earthquakes will occur “in various places” allows for the possibility that they may occur in regions that do not ordinarily experience them.

While we do not know if the recent outbreak of a large number of significant quakes in the Pacific Rim region will prove to be a prelude to “the Big One,” it was a sufficiently unusual number of quakes to draw media attention, so I wanted readers to be aware of it. Because we do not know where or when destructive earthquakes (or other weather events) will occur, it is prudent to make any necessary personal or family preparations before any such events hit your city or region. What preparations should you make? I suggest reading my article, Should Christians Prepare for Future Hard Times? The article applies to all readers, not just Christians, but it is addressed to Christians as there is a percentage of people in Christendom that think “I don’t have to make any preparations, God will take care of everything for me.” That attitude could prove to be a very dangerous one to have. If the Bible gives us prophetic warnings about risks to come in the latter days of our age, we are, in my opinion, tempting God if we ignore his warnings and make no preparations based on God’s advance warnings. My article has a practical yet biblically-based approach to this topic that does not have an alarmist tone and does not seek to sell you anything. For those not convinced that we are living in the “latter days” of our age, please read my article, Are We Living in the Biblical Latter Days?