Putin Hints That Nuclear Warheads Could Be Used Vs. ISIS 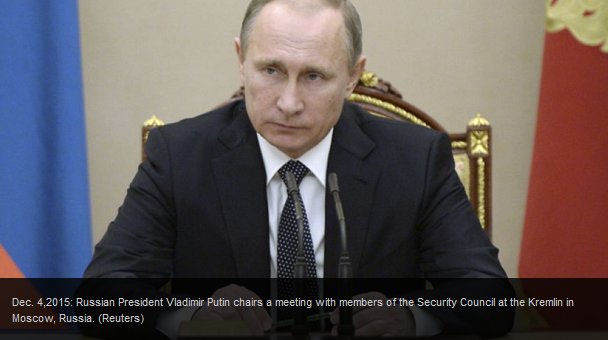 In what I think is a noteworthy development, Russia’s President, Vladimir Putin, has hinted that the Russian cruise missiles being fired at ISIS/Jihadi targets in Syria and/or Iraq could be fitted with nuclear warheads. While he says he “hopes” that won’t be necessary (first link), the fact that he even raised the possibility speaks volumes. The mere suggestion that Russian cruise missiles being used vs. ISIS could eventually have nuclear warheads significantly raises the stakes in the Mideast war on terrorism.

Now that Russia is hitting ISIS harder than any other nation, Russia has also made itself a logical and prime target for ISIS terrorists. I think Putin may have raised the hint of using nuclear weapons as a way of discouraging ISIS from attacking any Russian targets. He may have just sent the message that if ISIS terrorists hit Russia in a high-profile, mass-casualty attack, Putin may decide to use nuclear warheads on the main ISIS targets in the Mideast. It also shows that Putin is deadly serious about eliminating ISIS from the face of the earth. We all know that Obama isn’t serious about making that happen. Obama still has no recognizable strategy for waging any serious warfare vs. ISIS.

The second link and third link examine this story. They also note that Putin noted that the new Russian cruise missiles and weapons systems are working very well in a battlefield environment. In previous posts over the years, I’ve observed that Russia and China had developed many new weapons systems, but that they had no chance to test them in actual combat conditions. Russia is now taking advantage of the war on ISIS to field-test every new Russian weapons system that he can deploy to the Mideast’s regional warfare. Russia is now firing submarine-launched cruise missiles against ISIS targets as he tests one more new Russian weapons system. China has not yet been able to test its new weaponry under combat conditions, but would surely like to do so. A possible regional war in the South China Sea seems the most likely way that China could have a chance to field-test its new weaponry.

The Gog-Magog alliance partners, Russia and China, are flexing their military muscles while Obama’s main military concern seems to be making the US military a safe haven for homosexuals and transgender people. I believe it is very clear that the Gog-Magog alliance (prophesied in Ezekiel 38-39 to come into existence in the latter days of our age) is ascendant in global geopolitics, and that the USA and the West will grow steadily weaker as long as Obama is president. I wish this wasn’t the case, but that’s reality as I see it.