PUTIN ATTACKS UKRAINE: WHAT ARE HIS GOALS? 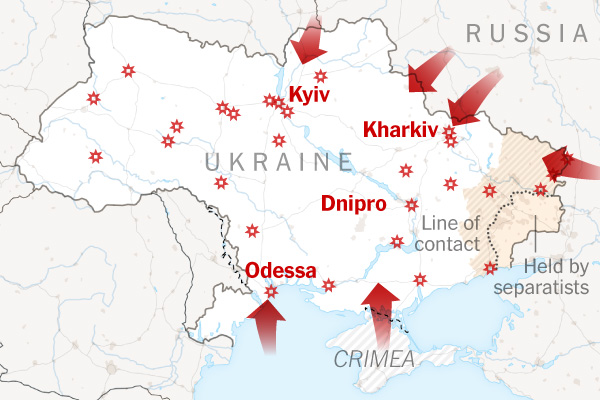 Vladimir Putin has ordered Russian forces to attack many Ukrainian cities and military targets (first link and second link). It is hard to get reliable information regarding the “on the ground” realities at the present time, but it is evident that the Ukrainian military forces intend to resist the Russian attack vigorously. There are contradictory reports from the combatants on cable-TV channels about what is happening at the front lines. Russia has said it has inflicted damage on the Ukrainian forces but it is impossible to quantify that damage. Ukraine has announced that it has shot down three Russian attack helicopters and destroyed Russian tanks using American-supplied Javelin anti-tank weaponry.  I am writing this post at a time when limited hard data is available, so please realize the situation could change quickly after I pen this post. My computer will be down for 2-3 days starting tomorrow so I feel the need to comment on Russia’s attack on Ukraine now before specific loss figures are confirmed.

What are Putin’s goals? He reportedly states he wants to “demilitarize” Ukraine (i.e. that means destroying Ukraine’s military), and install a new pro-Russian government. Of course, nothing Putin says can be trusted as lying is just another tool in Russia’s political toolkit. He certainly wants to prevent Ukraine from ever joining NATO, but his actions are showing all Ukrainians that their nation needs to be in NATO for its collective defense. I think Russia has deeper goals than just the future of Ukraine. Putin knows that the sanctions promised by Biden will actually hurt several NATO nations if the sanctions include a boycott of Russian energy exports. I think Putin believes that the pain of cooperating with Biden’s sanctions will cause some NATO nations to break ranks and refuse to fully cooperate with Biden’s economic sanctions. If so, one of Putin’s goals is to sow division amongst the NATO nations and he may even hope to splinter NATO altogether. Putin surely intends to destroy any vestige of credibility Biden and the USA have on the world scene, and he is so far very successful in accomplishing that goal.

Throughout this crisis, Putin has been 100% on the initiative. Biden and NATO have been 100% reactive and on the defensive. Putin is a man of action and Biden is a man of mere words. It is not likely that Biden’s sanctions will cause Russia to back off its military goals. Putin has seen that Biden is unable to take effective foreign policy actions. Putin must have been amazed that Biden, Blinken and Austin ordered US military forces to run from Afghanistan like scared rabbits from the ragged jihadis of the Taliban when there was no reason to do so. When Russia withdrew from Afghanistan, they withdrew in good order and took their equipment and people with them. If Biden had done the same thing, Russia would have respected his action. However, Biden ordered the US military to essentially “throw down their arms” and abandon perhaps $70 billion worth of US equipment in Afghanistan. The cowardice in Biden’s Afghanistan actions surely emboldened Putin to undertake his military action vs. Ukraine because he is virtually certain that Biden and NATO will have only feeble responses to his invasion of Ukraine. So far, Putin has been right.

Another tragic policy error by Biden has emboldened Putin to attack Ukraine. The entire world is watching Biden and his administration to see if they have any firmness in them. Why should world leaders trust or rely on Biden’s willingness to defend the borders of Ukraine or NATO nations when Biden is unwilling to defend the USA’s own borders?? Biden is allowing endless waves of illegals to cross the USA’s southern border even though everyone knows that drug smugglers, human traffickers, spies, sleeper cell terrorists, etc. are among these illegals. I can’t think of any other nation on earth that would allow itself to be so invaded. America desperately needs a pro-American president. What happened in Afghanistan and what is happening in Ukraine and on the USA’s southern border confirms we currently don’t have one. If Russia prevails in its invasion of Ukraine, China will be emboldened to invade Taiwan because China will also think Biden is a weakling incapable of firm action.

Putin is showing the world that NATO is only a “paper tiger” alliance that exists more on the drawing board than in reality. Many NATO nations have badly neglected their military forces for decades, and Putin is starkly showing them the error of their ways. If Biden and NATO had any real backbone, they would have deployed large numbers of NATO military forces to the Baltic Republics and eastern European NATO nations as soon as Russia began building up its forces around Ukraine. That would have shown a collective resolve to at least defend NATO nations from a Russian attack. Biden and NATO nations have deployed tiny amounts of planes and ground forces to NATO’s eastern arc, but those forces are far too small to repel any Russian invasion. Given the lack of any meaningful resolve by Biden or NATO to date, what is to stop Russia from sending its forces toward Berlin and Paris? NATO nations never dreamed Russia would openly invade other nations ever again. Now that that false hope has been shattered, the NATO nations need to rapidly build up their military forces if they wish to remain independent nations

This conflict may stay limited or it could escalate quickly. Each side could launch cyber attacks against the other side and stock exchanges could be hacked. In past posts, I have written that both Russia and China needed a regional war to battle-test their current weaponry and give their troops actual combat experience. Russia is now doing exactly that. China may follow its example. Several Eastern European NATO nations have now activated Article 4 of the NATO Charter which declares they are under an imminent military threat, requiring NATO responses to be implemented (third link). This is just one step below Article 5 which would require all NATO nations to go to war against Russia. We are in a steadily worsening situation.

Russia is now militaristicly aggressive and so is China. Iran is rapidly building a nuclear force as the Biden administration and Europe weakly allow it to do so via a new “surrender” agreement with Iran. Israel has warned that it is not bound by any new nuclear agreement the USA and the other declining European nations make with Iran. Where will all this lead to?

Eventually, what we are headed for is the fulfillment of many biblical prophecies about the latter days of our age. The very detailed prophecy in Ezekiel 38-39 is chief among the latter-day prophecies about national destinies. Ezekiel 38-39 prophesied millennia ago that in the latte days of our age, an alliance including Russia, China and Iran will launch a surprise attack against the entire western world and their allies. This end-time world war will trigger the return of Jesus Christ at the head of a heavenly army when mankind reaches the point of imminent self-extinction (Matthew 24:21-22, Revelation 19:11-20). That the Bible could have prophecies that accurately foretold modern-day alliances confirms the Bible has to be inspired by a Creator God who can implement his prophecies over vast stretches of time. To read the details about the final global war that will be triggered by a Russian/Chinese-led attack against the West, please read my report entitled What Ezekiel 38-39 Reveal about a Future World War III and Are We Living in the Biblical Latter Days? Also well worth reading to gain insights into the latter-day destinies of nations are my articles, The United States of America in Biblical Prophecy and Japan’s Role in Biblical Prophecy.