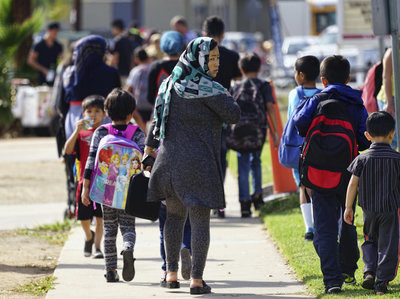 According to several news sources, President Donald trump is set to establish a policy that Christians from war-torn areas will be given preference in being granted US refugee status. The first link and second link offer details on this report. This policy change is reportedly due to be issued soon and its full details are not yet known, so I will not presume to offer a lot of specific details about it in a post until the change is actually implemented. It will likely include some actions with Sunni Muslim nations in the Mideast to establish “safe zones” for Sunni Muslim refugees in the region. The creation of such zones would enable Muslim refugees to be sheltered in their own religious environment in the Mideast so they would not have to travel to Europe, North America or anywhere else to seek safety. If this does occur, it will be a major foreign policy coup for President Trump and a benefit to refugees everywhere. Trump spoke to the heads-of-state of Saudi Arabia and the United Arab Emirates just days ago, so it may be that efforts are underway behind the scenes to implement such a policy.

In a related move, Austria has taken another move to discourage Muslims from coming to that nation. They are implementing a ban on full-face-veils for females in Austria, and this would deter many Muslim refugees from entering Austria–which is exactly what Austria wants (third link). Austria’s action shows that it is manifesting a trait that is growing among EU nations, which is to ignore the EU’s wishes and implement nationalistic policies to protect their own nations and their own populations.

If this report proves to be true, it will be welcome news to Christians everywhere as the safety of Christians was all but ignored under President Obama (second link).

President Trump’s intended temporary ban on Islamic immigration from seven nations where terrorism is rampant and ISIS is active is very popular with American voters, as the fourth link indicates. This is a news item that I had not seen cited in the mainstream far-Left media in the USA. The leftist media in the USA is conducting a massive anti-Trump campaign regarding his Executive Order on immigration so a poll that shows Trumps action is supported by Americans by a large margin is not welcome news to the Left-wing Democrats in Congress or their allies in the media.

Trump’s Executive Order featuring a temporary ban on allowing Muslims into the USA from regions where ISIS is active and vetting procedures are weak or non-existent makes obvious sense to me. It is refreshing to learn from the poll results that most Americans are in Trump’s corner on thisissue. It will be most welcome news to Christians everywhere if Trump issues new policies for the USA to becomes a protector of Christians around the world.

The persecution of Christians was prophesied to occur in the latter days of our age (Matthew 24:9-10), and Revelation 2:8-11 foretells that one large group of Christians in the world during the latter days will be in a region or situation where they are heavily persecuted and even martyred. That has been happening in the Mideastern region to many Christians, according to many media reports in recent years. The prophecy in Revelation 2:8-11 is discussed in considerable detail in my article, A New Look at the Seven Churches of Revelation. It offers a global look at the churches of greater Christendom in the latter days in light of the prophecy in Revelation 2-3 regarding Jesus Christ’s descriptions of the very varied state that will prevail in Christianity at the end of our age.

It is obvious from the first few days of President Trump’s administration that he will be an activist president who will work quickly to quickly reverse Obama’s neglect of US border and national security. I applaud that fact, but it will make for a raucous scenario for some time in American politics. I think it is appropriate to observe that America finally has a president who is “on the job,” not on the golf course.