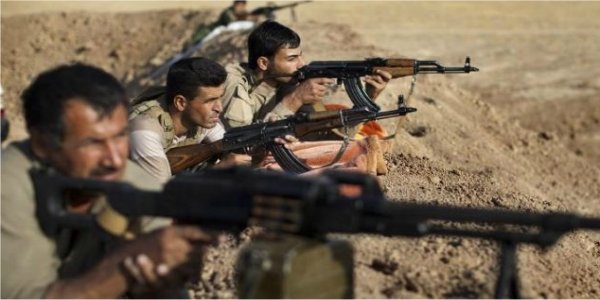 There is a rapidly developing crisis in the Mideast which will force President Trump to make a weighty decision very soon. Now that the war against ISIS is drawing to a close in the Mideast, the very disparate groups which were “allied” in the fight against ISIS are drifting rapidly toward a new war. This new war could result from the Iranian-dominated Iraqi central government sending its military forces into Kurdish-controlled regions near Kirkuk and other regions of Northern Iraq. The first link and second link report that skirmishing has already broken out between these two forces.

This impending conflict has huge ramifications for US policy in the Mideast, and President Trump will have to make some firm decisions very quickly. Does he sit back and do nothing, or does he choose a side in the potential fight in order to, hopefully, prevent additional fighting. The Kurdish Peshmerga are seasoned fighters who were the only force which actively stopped ISIS fighters at the beginning of that group’s invasion of Iraq. The Iraqi forces fled southward from Mosel and abandoned their weapons even though they outnumbered and outgunned ISIS. Mosel was recently taken from ISIS by the Iraqi forces, but they would likely still be fighting ISIS there if it were not for the support of US airpower and the support of Iranian ground forces. This very odd alliance between the USA and Iran vs. ISIS is now rapidly coming to an end. The Iranians want their puppet government in Baghdad to control the entire territory of the old Iraq in order to create a Shiite-controlled land corridor from Iran all the way to the Mediterranean Sea where Iranian forces can reinforce Syria and Hezbollah for a great war to wipe out the state of Israel. The Kurds stand in their way.

The choice for the USA seems self-evident. In order to support the Israelis and the Sunni nations of Saudi Arabia, Egypt, Jordan, the UAE, etc, and to prevent an Iranian triumph in the Mideast, the US needs to support the Kurds. Undoubtedly, Iran is hoping the Trump administration will dither long enough for their Iraqi puppet forces and Iranian-backed militias to oust the Kurds from Kirkuk and other regions in northwestern Iraq. In my humble opinion, President Trump ought to inform the Iraqi central government that it needs to negotiate with the Kurds on an equitable division of oil revenues from the Kirkuk oil field and how to establish the borders of a new Kurdish state. If Trump informs both the Iraqi central government and the Kurdish leaders that US air power will be bombing the Iraqi/Iranian forces if they move into Kurdish-controlled space, it should be enough to prevent a wider war. Indeed, Israel has warned that it will do “whatever it takes” to prevent an Iranian/Shiite land corridor from Iran to Hezbollah and Syria (as documented in a previous post). If we take Israel’s warning seriously, it means Israeli military forces will invade into eastern Syria to prevent any land linkage of the Iranian and Syrian forces. That would definitely mean a much wider war in the Mideast.

The situation is very fluid, and President Trump will need to make a decision soon. The Kurds have been the most faithful ally the USA has had in the fighting vs. ISIS, and if the USA abandons this faithful ally in their confrontation with Iranian-backed forces, the world will notice that the USA is not a very reliable ally and the credibility of the USA under President Trump will surely decline. The third link notes the Kurds are already negotiating with the Iranians on this crisis. This is a fast-developing and fluid situation. I hope President Trump makes the right decision…soon. He has no time to dither. His credibility and that of the USA is at stake. You can be sure that North Korea is also watching. If it sees America lapse into indecision and weakness in behalf of its allies in the Mideast, North Korea will be emboldened to ignore all of Trump’s warnings in the Korean situation. In this manner, American indecision in the Mideast could actually cause a major war in the Korean region. If North Korea sees American resolve in the Mideast, North Korea may hesitate about forcing a war with the USA.

From a biblical standpoint, what we are seeing is a confrontation between the forces backed by the Gog-Magog alliance of Russia, China and Iran and the Western forces led by the USA, NATO and their global allies (as defined in Ezekiel 38-39). If Iran can create its Shiite-controlled land corridor between Iran and Syria, it will have successfully defeated the interests of the USA, the Sunni nations and Israel, and this would markedly shift the advantage in the Mideast to the side of the  Gog-Magog alliance. I hope that does not happen, but we will have to wait to see the outcome of this Mideast power play.

Those not familiar with biblical terminology regarding modern alliances will find an in-depth examination of modern global alliances in light of biblical prophecies in my article, What Ezekiel 38-39 Reveal about a Future World War III.