Poland (and Other NATO Nations) Want to “Borrow” US Nuclear Weapons 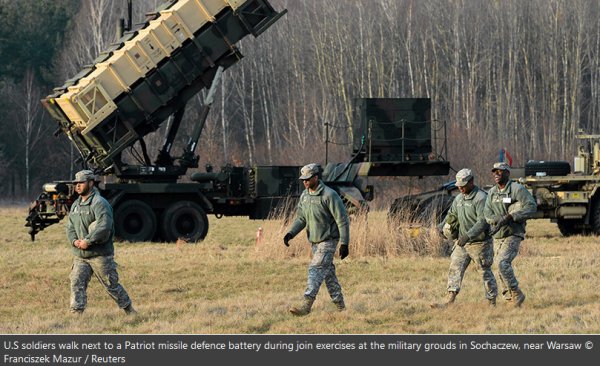 Russia is worried about a possible desire by the new Polish government to “borrow” a few nuclear weapons from the USA. The first link (from Russian media) offers some contradictory language about whether Poland has made such a request or not, but it makes the observation that: “The NATO alliance allows non-nuclear member countries to borrow US missiles.” Presumably this request involves nuclear-capable missiles as there are lots of NATO missiles which are not nuclear-capable. Lest you consider this to be a case of mere Russian bluster, consider the information in the second link.

The second link reports that not only are NATO member nations able to “borrow” US nuclear warheads, but a number of NATO nations already have done so. This link reports that Turkey, Germany, Belgium, the Netherlands and Italy already have transferred US nuclear weapons into their own military inventories, and that Canada and Greece have had US nuclear weapons in their military inventories since 1984 and 2001, respectively. How many other NATO nations have US nuclear weapons in their own military inventories, but have not divulged this information? Can you imagine Latvia, Lithuania and Estonia with a few nukes in their inventory? That would give them some deterrence vs. a Russian invasion. Poland clearly wants “in” on this program. Given Russia’s annexation of the Crimea from the Ukraine and Russia’s support for pro-Russian rebels in the Eastern Ukrainian provinces, Poland’s concern is very understandable. It wants some “forward deterrence” vs. Russia as well.

Poland was subjugated and brutally ruled by the Nazis in World War II. Then Poland was subjugated and oppressed by the Soviet Union for decades during the Cold War. Poland has no desire to be invaded or subjugated by a newly aggressive Russia anytime in the future. It is in the process of increasing and beefing up the effectiveness of its military. The third link reports on Poland’s new “stealth” tank which is scheduled to enter active duty circa 2018. It will be able to avoid detection via traditional infrared detection systems and perhaps via other systems as well. It is designed to simply blend into whatever is its background. The link includes some pictorial examples of what it can do. If it wants to do so, it can also light itself up with a billboard message. When deployed, the new Polish tank may have new capabilities no tank in the modern world shares. The fourth link details the numbers of weapons systems that Poland now has in its army inventory. It has a sizable number of tanks and armored vehicles of all kinds with more on order. It has hundreds of older Soviet-era tanks still in service that are scheduled for mothballing. However, given the information in my most recent post about the new Russian tactical “Khibiny” system which shuts down digital/electronic capabilities in other nations’ weapons systems (warships, planes and, presumably, tanks), Poland may want to keep its older Soviet-era tanks in service. Those older tanks likely have mechanical control systems which would not be affected by Russia’s new anti-electronics Khibiny system. Older weapons systems with mechanical systems would still be able to fight in an environment where the cutting-edge, new Russian technology is deployed. Other nations may need to reactivate their older mechanically controlled weapons systems to have an immediate counter to the new Russian system which shuts down electronic systems in rivals’ newer electronic weaponry.

To offer an additional thought on the new (and apparently completely unexpected) Russian Khibiny system, it is apparently a localized tactical weapons system, not a strategic one. The effective range of the system is unknown. The account of a Russian warplane deploying a weapons pod with this new system which shut down all electronics on a US warship operating in the Black Sea indicates one of three things: (A) that the Russian warplane had to be fitted with a counter-measure device to remain unaffected by the Khibiny anti-electronics pod, (B) that the Khibiny device emits a narrow directional beam at an opposing weapons platform which does not harm the host platform carrying it or (C) the Khibiny system has a built-in IFF (Identification Friend or Foe) aspect to its beam which enables it to harm enemy targets while not disabling Russian electronic weaponry which it can identify as “friendly.” I’m sure US and Western intelligence agencies are working overtime to figure out countermeasures to use against this new Russian technology which gives their forces immense tactical advantages.

Back to the possible Polish desire to borrow a few US nuclear weapons. The NATO policy of allowing its member nations to borrow nukes from its nuclear-capable member states has not been generally known, I believe. This policy means that there are more nuclear-capable nations with nuclear weapons in their military inventories than most people realize. I think Japan could be a nuclear power very quickly if it chose to be one. Taiwan and South Korea surely have the technology to develop nuclear weapons. If backward North Korea can do it, surely these western nations can do so as well. I have posted over the years citing links which assert that since Saudi Arabia funded much of Pakistan’s nuclear weapons program, the Saudis have the right to assume control of a specified number of Pakistani nukes whenever they choose to do so.

This world is starting to look a lot more dangerous than we global civilians have realized. Many nations are working on very-high technology weapons systems. Some have been publicized; others have doubtlessly remained secret. No one really can now fully compare the relative strengths and capabilities of the rival alliances foretold in Ezekiel 38-39 to come into existence during the latter days of our age.

I find the latest developments in military technologies to be critically important in monitoring developments between the Gog-Magog alliance led by Russia, China and Iran and the rival alliance led by the modern nations of the ten tribes of Israel and their global allies. I hope many readers share that interest. I shall do my best to keep readers informed about such developments.