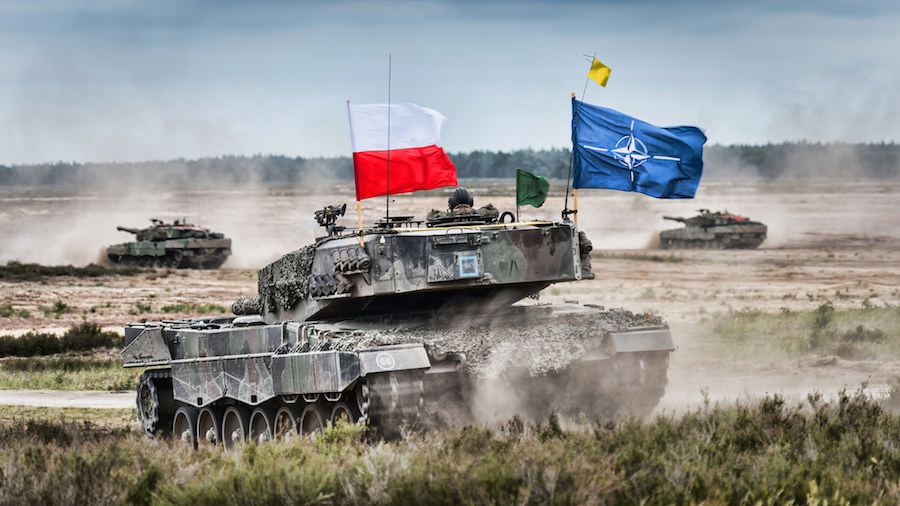 Poland gets little attention in the American media, but it has been making significant military strides since the Cold War ended to make itself a leading power in the NATO alliance. Poland has very bad national memories of its being occupied and brutalized by Nazi Germany for several years during World War II and then being occupied and oppressed by Soviet Russia for 45 years after that war ended. Poland has enjoyed its current independence for a mere quarter century, and it is perhaps its long experience of being occupied and oppressed by other nations that inspires Poland to make itself a military power in its own right within NATO. It does not want to be subjugated again.

The first link reminds us that while most NATO nations have been reneging on their pledges to spend 2% of their respective GNPs on defense spending, Poland is one of the few nations that has met that goal. It also informs us that Poland has allocated $62 billion to pay for sophisticated weapons upgrades to its military forces. Poland is also increasing its army from 80,000 to 150,000 soldiers. This figure will be enhanced by the creation of a 53,000 Polish armed reserve force that will be located throughout Polish provinces. The combined total of Polish forces will put it among the major European NATO nations in army size. It will be matched or exceeded only by France, Germany and the United Kingdom among European NATO nations, which have 200,000, 180,000 and 162,000 soldiers, respectively. However, it may surprise readers to learn that Poland has the largest tank force among European NATO nations. The second link lists the tank strengths of the globe’s nations, and it immediately stands out that NATO’s European nations have remarkably small tank forces compared to many of the world’s other nations. When going through that list of tank totals, Poland is listed as having 1,065 tanks, the most of any European nation in NATO. That total gives it almost as many tanks as the nations of Germany, France and the United Kingdom combined, which have only 543,406 and 244 tanks apiece. Russia has, by far, the largest global tank force, and the USA has NATO’s largest tank force (some of which is located in Europe). Turkey has a lot of tanks and is still a NATO nation, but it is not a European NATO nation. It may surprise you to see who has the second-largest tank force among NATO’s European member nations, but I’ll let readers check that out for themselves in the second link. [Readers will note in the second link that the Mideast, the Indian subcontinent and the Korean Peninsula are home to some of the world’s largest tank forces.] The third link gives Poland’s latest military strength totals in considerable detail.

Poland has very justifiable reasons for wanting to bolster its military power. While the Warsaw Pact nations of Eastern Europe switched sides after the Cold War ended and joined NATO, Russia has, under Vladimir Putin, dramatically increased Russian military forces in his tenure as Russia’s leader. Russia is, this month, conducting massive war games by its forces and those of Belarus along the eastern border of NATO. I think Russia’s message to NATO is clear in this exercise. A BBC report on these exercises estimates the Russian-Belarusian forces in the exercise number perhaps 12,500 troops (fourth link), but many estimates have numbers far higher than that. One estimate in the Washington Post gives a total of 100,000 armed personnel participating in this Russian-Belarusian war game (fifth link), which include locations not only along NATO’s eastern border, but also in Kaliningrad, a Russian enclave located between Poland and Lithuania. These Russian exercises are occurring along Poland’s eastern and northern borders, so this Russian exercise can only motivate Poland to increase its military power even further than already planned.

I hope I have enabled readers to see Poland as an emerging military power among NATO’s European nations. American President Trump visited Poland soon after he was inaugurated in recognition of Poland’s important role in NATO and to recognize Poland’s honoring of its commitment to spend 2% of GNP on its military forces.

Now for a little history lesson about Poland, which I hope readers will find both enlightening and entertaining. Poland used to be a major power in Central and Eastern Europe and at one time, was united with Lithuania in a single nation. Poland was at its zenith when it, literally, saved Christian Europe from the Ottoman Turks which had invaded Central Europe from the Balkans to impose Islam on Christian Europe. The year was 1683 when a massive Polish force arrived to drive the Ottoman army from the walled city of Vienna which was on the verge of falling to the overwhelming numbers of the Ottoman army. The King of Poland, King John (Sobieski) III, led a force of approximately 80,000 men to relieve the siege and drive the Ottomans out of central Europe (sixth link). Movies have been made about this epic battle, but I doubt Americans have ever seen the movies or even heard about this critical battle. Fans of the Lord of the Rings (LOTR) movies will be interested to learn that the charge of the Polish (and allied) cavalry forces that charged the Ottoman army at Vienna was the real-world inspiration for the scene in the final episode of the trilogy of LOTR movies when the Riders of Rohan arrive to save the city of Minas Tirith when it was being besieged by orcs. The final three links (below) are YouTube segments of movies about the charge of the Polish cavalry that saved Vienna (and Christian Europe). The Polish cavalry then did have an unusual decorative set of wings behind each rider which made them look like “winged angels” as they attacked the Ottomans. This Polish cavalry charge has been called in a number of military journals the greatest cavalry charge in history. The Riders of Rohan in the Lord of the Rings movie, The Return of the King, numbered 6,000 in the movie and that total looked quite massive as seen in its charge against the orcs. The total size of the Polish cavalry charge numbered 18,000 (three times as many riders!) as cited in the links below. I’ve seen their numbers given a higher total in other military magazine articles. The movie links include segments that are Roman Catholic in nature, but that would be consistent with the time being addressed. Indeed, Poland is heavily Catholic to this date.

So let’s give Poland some respect. If it hadn’t been for Poland’s decision to militarily rescue Vienna in 1683, much of Europe would be speaking Turkish today and most women in Europe would be wearing burkas.