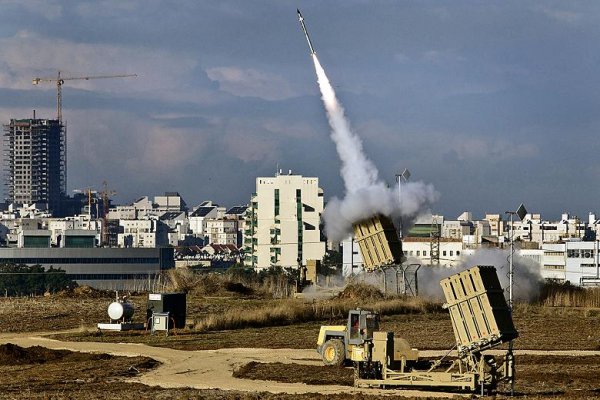 There has been a very revealing development in the Mideast. The first link and second link report that the Islamic Persian Gulf states are in negotiations to purchase the Israeli “Iron Dome” missile-defense system to enable them to defend against Iranian missile attacks. This speaks volumes about how realities are changing rapidly in the Mideast. Not long ago, it would have been unthinkable for Islamic Sunni nations to openly acknowledge that they are willing to buy high-tech Israeli weaponry to defend themselves vs. Shiite Iran. The Iron Dome system is a very sophisticated, state-of-the-art anti-missile defense system. Until recently, it would have been unthinkable for the Israelis to even consider selling one of their ultra-modern weapons systems to Islamic nations. That both sides are willing to do such a deal at this time confirms just how urgent both the Israelis and Sunni Arab states regard the growing military threat from Iran. That Israel is willing to consider selling a version of one of their key national security defense systems to Sunni Muslim nations is a clear indication that they are now considered to be allies against Iran.

The Sunni Arab nations which are specifically reported to be on the list to buy this Israeli missile defense system are Saudi Arabia, Qatar, the UAE, Bahrain and Oman. All are directly “under the gun” of Iran’s military threat. They really do need a top-notch missile defense system, and they need it soon. When Iran receives an approximate $100 billion in released sanctions money as a result of the strange nuclear facilities deal negotiated by the Obama administration, Iran will be free to buy and build many thousands of new missiles. If you were a theoretical news person coming to planet earth from another star system, you could look at modern geopolitics with dispassionate eyes and possibly conclude that President Obama must be one of Iran’s biggest allies. Hmm. One of Obama’s top advisers, Valerie Jarrett, is Iranian-born. I’m sure any pro-Iranian tilt in the Obama administration is just a coincidence.

Paradoxically, it is the USA which is currently brokering the sale of the Israeli missile defense system from Israel to the Sunni Arab nations. The second link reports that the USA is acting as a middleman in the deal due to policies of the Netanyahu administration. This is likely a reference to the ongoing and currently very troubled relations between the Israelis and Palestinians. Interestingly, a “senior government source” in one of the Sunni Arab nations is quoted in the second link as saying that if “Netanyahu…was more like Anwar Sadat, then we would be happy to buy the missiles straight from Israel (emphasis added).” That statement also speaks volumes about how close the behind-the-scenes relations have become between the Israelis and the Sunni Arab nations.

For several years, I have been commenting in my posts that the Iranian threat would steadily push the Israelis and Sunni Arab nations together. This is now clearly happening. It was applying the prophecy in Ezekiel 38 to modern geopolitics which caused me to expect this development. As time passes, I believe it is clear that the prophecy in Ezekiel 38 is the most detailed and specific biblical prophecy about the destinies of nations in the latter days of our age. That Ezekiel 38’s prophecy about the destinies of nations is coming to pass in our time confirms that we are living in the latter days and that there is a Divine Creator who authored that prophecy and is making it come to pass.