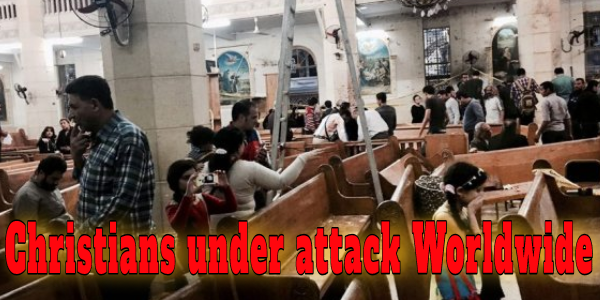 All readers have seen the dramatic footage of the Cathedral of Notre Dame burning in Paris, France.  Authorities in France were quick to state that it wasn’t a result of terrorism even before any formal investigation began. I’m hoping that it was just an industrial accident, but well-known American media personality, Glenn Beck, raised the possibility that it may have been an act of terrorism (fourth link). What is not being reported in many media reports about the Notre Dame fire is that acts of vandalism against Christian churches in France have become widespread. A left-wing American media source, Newsweek, did do a story acknowledging this fact (fifth link), and the sixth link reports that two Christian churches are being vandalized or attacked in some way every day in France. The investigation into the Notre Dame fire needs to consider the possibility of terrorism precisely because attacks against Christian churches in France have become so widespread. Also very worrisome is the fact that a man attempted to gain entry to St. Paul’s Cathedral in New York City armed with gasoline cans and fire accelerants (seventh link). That attempted attack occurred just two days after the Notre Dame fire–evidence of a pattern of attacks vs. cathedrals or just a coincidence? France has a large Islamic population–has France investigated whether the rise in attacks vs. Christian churches in France is due to Islamic terrorism?

Christian churches are not being attacked only by Communist governments or Islamic terrorists. In the USA, three black churches in Louisiana were burned and police have arrested a person who had a fascination with “neo-pagan metal” music (eighth link). It seems evident to me that a person heavily involved in “neo-pagan” music might be motivated by such music to attack Christian churches. It also needs to be noted that the person arrested was a white person who apparently chose black churches to burn. This shows Christians of any race or ethnic group are potential targets. The final three links offer a variety of evidence about the global spread of attacks and persecutions against Christians.

Christians living in the USA or western nations shouldn’t look at persecution vs. Christians in nations around the world and think “it couldn’t happen here.” It could. In Matthew 24:9-13 in his answer about conditions that will occur in the latter days of this age, Jesus Christ prophesied that his followers would be “afflicted,” “killed ” and “hated,” and he added that Christians would need to “endure to the end” such conditions of affliction. Revelation 20:4 prophesied that some Christians would be “beheaded” for their faith in acts of martyrdom. Such grisly executions of Christians were carried out by ISIS in recent years in the Mideast, and some acts of mass execution were so numerous that the heads of Christians were mass-displayed on posts. Thankfully, ISIS has been driven  from power in all the territories they controlled in Syria and Iraq by the intense bombing of/warfare against their positions by the coalition led by US President Donald Trump, but ISIS is far from dead as the recent mass attacks vs. Christian churches and Western-style hotels in Sri Lanka have proven. In Revelation 2-3, the latter-day Christian church is prophetically addressed in the vision given to the Apostle John, and it described latter-day Christian churches as generally falling into seven different “spirits” or general characteristics. This vision makes it clear that by the latter days, the Christian church will be split into different groups (“denominations” in modern terms) which will exhibit very different characteristics, as in organizational structure, doctrinal understanding and knowledge, socioeconomic and living conditions, etc. One of these generalized latter-day churches is called the church at Smyrna, which will be living in circumstances that bring them an especially high exposure to tribulation and death. Please read my article, A New Look at the Seven Churches of Revelation [PDF] which examines in detail this prophecy about the Christian churches in the latter days.

The book of Revelation does offer hope to Christians that God will send them miraculous protection in the latter days for approximately three and one-half years. Revelation 11 prophesies that God will empower two persons (the Two Witnesses) who will wield such massive delegated divine powers from God for 1260 days that verse 6 states they will be able to “smite the earth with all plagues as often as they will (emphasis added).” It is my expectation that during their ministry they will be able to protect their fellow Christians by smiting anyone who persecutes Christians with plagues sufficiently powerful to stop such actions. Please see my article, The Two Witnesses, for an extensive examination of their ministry, which is prophetically discussed in more than one location in the Bible.

My thanks to a reader for sending me one of the links cited below.