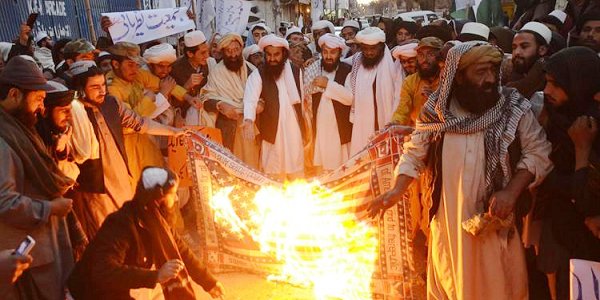 Relations between the USA and Pakistan are openly turning hostile. These nations used to be allies when they cooperated to drive the Soviets out of Afghanistan by their mutual support of the Mujahedin, but they are allies no more. Pakistan, as we will see below, has irrevocably allied itself with Communist China. This action means that Pakistan will align itself with China, Russia and Iran and all the blood and money the USA has spent in Afghanistan will almost surely end up being wasted in a lost cause.

Pakistan, as my previous posts have discussed, has already given its port city of Gwadar on the Indian Ocean to China to build up as a major commercial and military port complex. Pakistan also was sheltering Osama Bin Laden on its soil at the time he was found and killed by US special forces. That so high a terrorist could be living in Pakistan in a guarded compound without Pakistan’s knowledge is not a believable claim. Pakistan also has grievances of its own. People in the tribal regions along its porous Afghan border have grown weary of having their weddings and clan gatherings bombed by US drone strikes. The Pakistani-American “alliance” has been a fiction for some time. President Trump has acknowledged the reality of the situation by cutting off strategic aid payments to Pakistan and placing it on the US State Department’s watch list as a nation that does not protect religious rights (first link). The first link estimates the USA has given Pakistan perhaps $20 billion over the years with little to show for it. The second link adds that the USA and Pakistan are on a “collision course,” and the cut-off of US aid has caused some in Pakistan to advocate for cutting off US overflight rights needed by the USA to supply American troops fighting in Afghanistan. This is likely to occur at some point in the future, and this puts US forces in Afghanistan in an untenable position.

Please look at a map or globe. Afghanistan is a landlocked nation surrounded by nations hostile to the USA and the West. Ex-Soviet “-stan” nations are to the north of it, rabidly anti-American Iran is to its west and anti-American China is to its east. Increasingly anti-American Pakistan is to its south. If there are no overflight rights across Pakistan, US forces in Afghanistan forces will be isolated with no avenue for retreat or resupply. They would have to fight their way to the Arabian Sea to get withdrawn in an all-out crisis.

The third link and fourth link show how deeply Pakistan has allied itself with China. Pakistan has already given China the right to build a huge commercial/military base and seaport at Gwadar which is located at the Straits of Oman just east of the Straits of Hormuz where much of the world’s oil supply traverses. A second such site at Jiwani was selected and approved by a meeting of Pakistani and Chinese military officers, so there is no doubt this will be a military port. Gwadar and Jiwani sit astride the route the US will need to use to get its forces out of Afghanistan. It seems to me that while the USA is fixated on pursuing an endless war in Afghanistan with no path to a strategic victory, China, Iran, Pakistan and Russia are playing a geopolitical chess game and the US forces inside Afghanistan are close to being checkmated. During the time of the geopolitical “great game” in Asia, the British Empire tried to occupy Afghanistan and failed. More recently, the Soviet Union tried to subdue Afghanistan and it also failed. At least the Russians had the good sense to accept the temporary humiliation of a total retreat and stop “throwing good money after bad.” The USA continues to expend its blood and money in Afghanistan in pursuit of unattainable goals. The Taliban will simply out-wait the USA and take over when the Americans leave just as North Vietnam out-waited the USA and took over South Vietnam when the Americans finally exhausted themselves in that region.

From a biblical perspective, the loss of Pakistan and Afghanistan to the West was inevitable. It was prophesied to occur in Ezekiel 38-39–the Bible’s key prophecy about global alliances during the latter days of our age. The anti-American, anti-Western alliance is referred to as the “Gog-Magog” alliance in religious parlance. Many students of biblical prophecy can see the modern Russian-Chinese-Iranian alliance as being identified in Ezekiel 38:2-6. One member of that alliance is described as “Ethiopia” in the King James Bible (KJV), but the actual word translated “Ethiopia” is “Cush” or “Kush”–one of the sons of Ham (Genesis 10:6). When looking on a modern map, you will find this name stamped across northern Pakistan and Afghanistan in the rugged “Hindu Kush” mountains. This indicates the descendants of Cush or Kush are in this region, and they were fated by God millennia ago to be in the Gog-Magog alliance in the latter days of this age. Cushites can also be found in the Horn of Africa, and China is building a new military base in Djibouti in that region. Obviously, that Chinese base is being positioned to attempt to control the southern approaches to the Suez Canal and to prevent Western naval reinforcements from traversing that route between the Mediterranean Sea and the Indian Ocean during a future East-West war.

President Trump is trying to correct some of the foreign policy blunders he has inherited from Presidents Bush and Obama, but it is a slow slog to try to re-deploy the depleted US military forces to defensible positions around the world. US forces in Afghanistan are in an indefensible and dangerously-exposed position. They should be withdrawn sooner rather than later. Ezekiel 38 already shows us God’s will is that the “Kush” region will be part of the Gog-Magog alliance in the latter days, not the Western alliance. War-planners would have a huge advantage if they read and understood the Bible’s prophecies as God has already predetermined many things about the geopolitical realities of the latter days (the time we are living in now). Unfortunately the world has been duped by evolutionary fables so leaders will continue to stagger onward blinded to the fact that they are unwitting players in a script that God predetermined millennia ago. God promised in Isaiah 41:21-26 and 46:9-11 that he would surely implement his biblical prophecies and modern events confirm God is fulfilling Ezekiel 38 exactly as foretold approximately 2500 years ago. To learn how the modern age will finally come to its destructive climax, please read my articles, What Ezekiel 38-39 Reveal about a Future World War III, and Are We Living in the Biblical Latter Days?