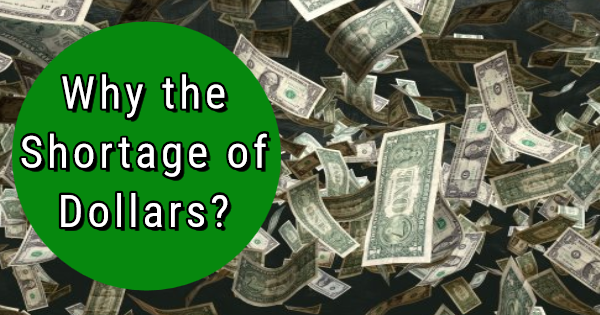 There are severe disruptions occurring in the global financial system, but very little is mentioned about it in the media. These disruptions could eventually cause major disruptions in your personal life and finances as well, so these events bear close scrutiny.

The first major indication that something is really wrong “behind the curtain” is that the Federal Reserve Bank is injecting liquidity at an incredible rate into the financial system. According to the first link, the Fed is creating $100 billion per day and loaning it to unspecified Big Banks. This program reportedly began on September 17th and will end circa October 10 (second link). This means a stunning $1.7-2.3 trillion is being created by the Fed in a short period of time to address some critical need–about which the public is not being told. The first link notes that the US Congress (and apparently bank regulators too) are “willingly looking the other way” as this phenomenal amount of new money is being created and sent into the financial system to meet some unspecified critical need. The second link relates that there is a liquidity crisis occurring in Europe and Asia so perhaps this new creation of an immense amount of US dollars is intended to keep the global financial system afloat. That link also reports that the majority of US currency is being “circulated” outside the USA in foreign nations, so the Fed may be creating the money to meet foreign demand for US dollars. The third link and fourth link support the theory that a banking crisis in Europe is triggering this Fed response.

Also, if there is a massive foreign demand for US dollars, that would push the value of the US dollar upwards, which would hurt the US in world trade efforts as foreign goods would be less expensive by comparison. Given the current trade war between the USA and China, a sudden leap upward in the US dollar’s value would really hurt the US in the trade talks–which might explain the Fed’s increase in the supply of dollars to match the sudden leap in demand for them. However, the cause for the Fed’s, sudden opening of the floodgates of dollar creation, are unknown and unexplained, so it is is also possible an unpublicized domestic financial crisis is also occurring. The first and second links together indicate that the Fed’s actions echo its responses to the sub-prime loan crisis which triggered the Great Recession of 2008.

Other possibilities exist. The US Department of Justice has recently indicted three traders at JP Morgan Chase for manipulating the precious metals markets (fifth link and sixth link). These links charge these traders manipulating precious metals prices via the futures markets and other illegal techniques for eight years via thousands of illegal transactions. The sixth link adds that this manipulation of the metals markets added millions of dollars to bank income while cheating investors out of tens of millions of dollars in income. Precious metals refer to gold, silver, platinum, and palladium. Given the historic role of precious metals as “safe harbors” where money runs to when global uncertainties occur, and given the many flashpoints around the world where major wars could erupt at any time, it is remarkable that the prices of gold and silver have moved in recent years in such a narrow range that they do seem to be disconnected both from predictive logic and their historic trading behaviors. It strengthens the government’s case against these precious metals traders that the markets have been behaving very strangely during the time the three traders are accused of manipulating these markets. The seventh link is a previous post that it was known years ago that a number of Big Banks were manipulating the price of gold and silver, so it is hardly surprising that precious metals traders from JP Morgan Chase were involved in this manipulation. What is surprising is that the Department of Justice finally charged someone with a crime regarding this manipulation.

Over millennia, the gold to silver pricing ratio has hovered around a 1:16 ratio (eighth link). The ninth link offers a number of reports with charts about the historic ratio of gold and silver, but be aware that some of these links are from entities in the precious metals business. That 1:16 ratio has massively been altered in recent decades with silver being very undervalued compared to its historical levels. As recently as the administration of President Jimmy Carter, gold reached approximately $800 per ounce and silver attained approximately $50 per ounce–a ratio of exactly 1:16. Consider what has happened since then. Gold has recently been hovering around $1500 per ounce, while silver has hovered around a mere $17 per ounce (a ratio of 1:88). If a historic valuation of 1:16 was suddenly restored today, silver would be priced at approximately $93 per ounce. Given the tremendous dislocations in these historic ratios in recent decades, it argues the Department of Justice is right in accusing precious metals traders of manipulating the prices of these metals. Another possible reason for manipulating the prices, of gold and silver, are the recurrent rumors that Russia, China, and other nations will act together to impose a gold-standard on world currencies and trades. It could also be a crisis in the derivatives markets that is causing the Fed liquidity rescue. We at this time do not know the specific reason for the Fed’s sudden action. What we can see is that some unknown crisis has caused it.

Those of us, in the general public, are not being allowed to know what fiscal crisis has triggered the Fed’s almost panic creation of US dollars, but we should be aware that it is occurring, and that it is occurring with almost no media attention. Something very big is happening behind the scenes in the global financial markets, and we may see what the crisis is in time. However, I’d like to remind readers that Revelation 17-18 in the Bible offers a prophecy that in the latter days of our current age, a global financial/monetary crisis will occur which will shake the world to its foundations. Revelation 18:3-11 foretell that an insider cabal of people in governments and global corporations have enriched themselves at the expense of all others in the latter days (verse 3), and verses 11-14 indicate that merchants will have all kinds of merchandise to sell but no one can buy their goods and services. This sounds like there will be a crisis in the value of money itself–a possible collapse of fiat currencies. If there is no trustworthy medium of exchange, financial transactions cannot occur. Revelation 18:10, 17 and 19 all prophesy the collapse will occur within “one hour.” This would have been a total impossibility until global financial markets were all linked digitally in real-time so they could collapse quickly like cascading dominoes. This prophecy is evidence of divine authorship as no human in the 1st century AD (when the Apostle John wrote it) could have foreseen any such thing as global financial markets or digital interconnections. Revelation 17 indicates that there has been an insider Deep State that has dominated the nations for a very long time, and this prophecy calls it Babylon the Great or The Great Whore. Its fall will be sudden, unexpected and perhaps bloody, given the wording in Revelation 17:16 about its fall.

We cannot know whether the current behind-the-scenes crisis that the Fed is responding to will be the final crisis that collapses the global financial system, but we can prove that we are living in the biblically-prophesied “latter days” so Revelation 17-18 could be fulfilled at any time.  For much more detailed information about how these biblical prophecies will be fulfilled in our foreseeable future, please read my free articles, Are We Living in the Biblical Latter Days?, Is Babylon the Great about to Fall…Ushering in a Global Beast System?, The Babylonian Origin of the Modern Banking System, and Should Christians Prepare for Future Hard Times?