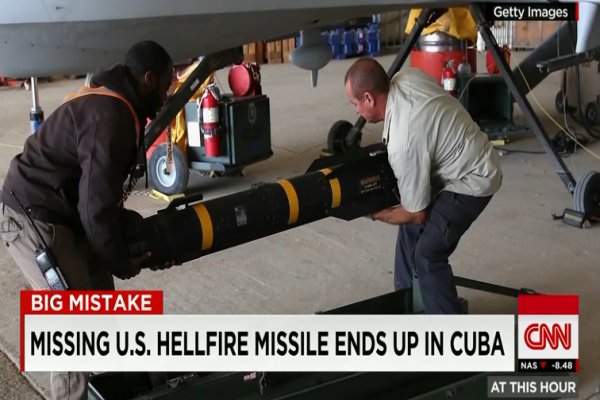 Just when you think the Obama administration has plumbed the depths of incompetence, something new is revealed which shows there are scarcely any limits to its incompetence.

It has just come to light that a sensitive US Hellfire missile, a vital air-to-ground missile, was sent to Europe for “a NATO training exercise,” but that it never made it back to the USA (first link and second link). For reasons that are incomprehensible to competent people, the Hellfire missile was shipped to Communist Cuba on its return leg. The first link reveals that this occurred in 2014 so this tragicomic foolishness by the Obama administration has been covered up for over a year before now coming to light (the Wall Street Journal broke the story). The missile, thankfully, was not a fully armed and operational missile, but it “still contained sensitive American weapons technology, such as targeting and sensor information.”

Other court jesters in the Obama administration said that “US officials would be concerned if it fell into the hands of its adversaries.” I think it is safe to say that that has already happened. Since this US missile has been sitting under careful guard at a Cuban installation somewhere for well over a year, I have no doubt that Russian, Chinese and Iranian engineers have been given full access to the US missile to glean all the information they can from it so they can know how to defeat or disable it during future combat missions.

Obviously, heads should roll over this incompetence that jeopardizes US national security, but that is not likely in an administration where incompetence is apparently standard operating procedure. The first link adds that the Department of Homeland Security (DHS) “is investigating to make sure the missile was not intentionally sent off course as part of an espionage or criminal operation.” That is odd wording. It sounds like the DHS’s mission is to “make sure” that no such nefarious intent was involved. Who cares about “intent?” At this point the damage is already done, regardless of intent.

It adds the Department of Justice has the lead in this investigation. Why isn’t the Defense Intelligence Agency in charge of this investigation? It was Defense Department technology that the State Department managed to lose. Why would any civilian agency be investigating what is an obvious military matter? It is my personal viewpoint that the Obama administration knows that a Defense Department investigation would “tell the truth” and “name names,” but that a civilian agency whose head is close to the Obama White House can be relied upon to sweep the whole thing under the rug. Americans should care about this. It is your sons and daughters in the military who may die if this screw-up by the Obama administration results in Hellfire missiles becoming ineffective in the future when they are needed during combat operations.

Isaiah 1-4 is a prophecy about the very sinful and messed-up state which will characterize the latter-day nations of the tribes of the house of Israel (the ten tribes) and the house of Judah (two or three tribes). The term “House of Jacob” is used in this prophecy which means all the Israelite tribes. I urge you to read these chapters. It prophesies that the special interests will be bribing national leaders, that there will be a feminist movement and a gay rights movement, etc. Sound familiar? In Isaiah 3:1-4, the prophecy indicates that the nations will be ruled by “babes” and “children,” and that competent, capable leadership will be sorely lacking in the civilian, judicial and military segments of their societies. Again, sound familiar? The USA desperately needs capable, nationalistic, pro-American, competent leadership. Hopefully, by God’s grace, the next president of the USA will fit that description. Pray that that happens!