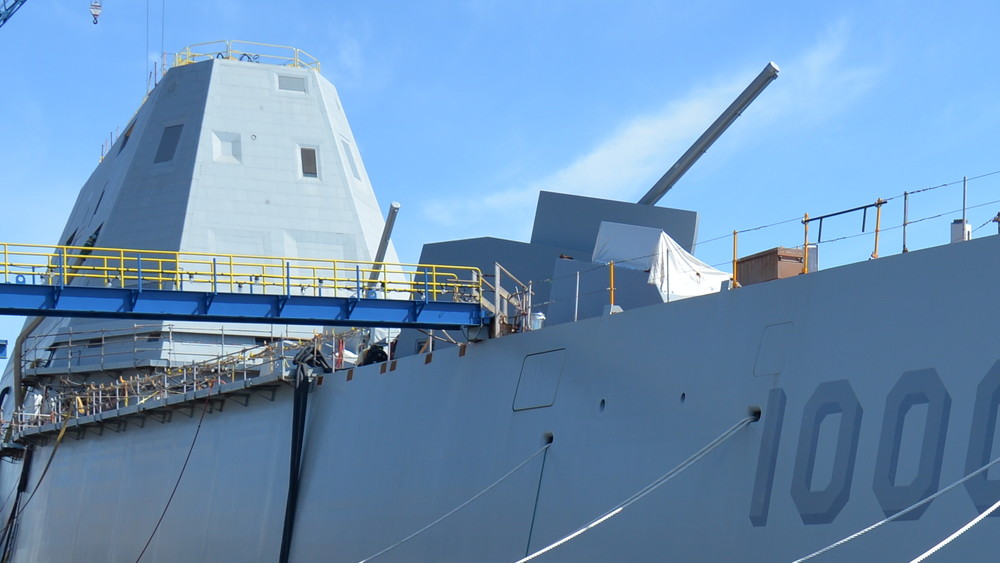 Sometimes we come across media stories that are almost too crazy to believe. These links detail such an instance. Long-time readers will recall posts I did some time ago re: a new type of US Navy warship and its cutting edge new weapons system called a rail-gun. (12-14-2010, 6-30-2014, 10-23-2014.) The rail-gun fires heavy projectiles from 60-80 miles (sources vary in their estimates) and they hit with such massive force that they generally obliterate anything they hit (first link). The military wanted over 20 of the new warships, but drastic budget cuts that shrunk the military’s force levels cut the number of these new warships to be purchased to a mere three units.

As anyone in private business realizes, there is something called “economy of scale” in purchasing items. The more of something you make, the lower its per unit cost becomes. Wal-Mart built a very profitable mega-chain of stores based on this principle of buying and selling lots of all kinds of items bought in bulk so they could be bought and sold cheaply. Also, the fewer of something you make, the higher its per unit cost will become. In deciding to buy only three of one type of warship, the US government skyrocketed the per-unit cost of these warships. It also likewise skyrocketed the cost of the rounds of ammunition for this new weapons system due to vastly shrinking the units of ammo to be purchased.

As detailed in the second link, third link and fourth link, the Obama administration decided to keep the warship but cancelled all orders of ammunition for the new warship’s weapons system. The first link reported that each of these new warships costs $7.2 billion to make. What use is a $7.2 billion warship with no ammo? Nevertheless, Obama’s administration decided to essentially disarm the US Navy by refusing to buy any ammo for these new warships. The rounds cost $800,000 each, but would have cost far less if more of them had been bought for more of the new class of warship. People in private business understand these business principles. Many in government do not comprehend the simplest of business management practices. Yes, $800,000 per round is an expensive round of ammo, but if it destroys an enemy carrier or major surface combatant ship that costs perhaps $500 million to $2 billion, that is an extremely efficient use of money. There is another vital principle that Obama’s administration doesn’t grasp at all. That principle is understood by the question: How expensive is the cost of losing a war? Ask post-World War II Germany and Japan that question. Victory is essential in war–you spend what it takes to win. Also having an expensive warship with no ammo makes Obama and his administration change the concept of deterrence into a joke, and make Obama and his administration look like childish fools who understand nothing about the real world. Isaiah 1-4 contains prophecies about the state of the Israelite nations in the latter days (the term “in that day” refers to “the Day of the Lord,” or “latter days” at the end of our age). Isaiah 3:12 warns that some Israelite nations will be oppressively governed by mere “children” who lack any adult common sense or judgment. Building a $7.2 billion warship and then obtaining no ammo for its guns is just one more in a long line of examples that the US has been governed by clueless “children” during the Obama administration. The entire world has noticed the stupidity and weakness of this bizarre military mismanagement; the fourth link is from the Russian media. I doubt Russia (or any other nation) would build a $7.2 billion warship and not buy any ammo for it.

I’m old enough to recall that the Jimmy Carter administration (which helplessly wrung its hands and did nothing useful while the US embassy staff was held in captivity in Tehran for over 400 days) cancelled the B-1 bomber project because it, like the Obama administration, was anti-military. When Ronald Reagan was elected, he promptly ordered a large number of B-1 bombers because he understood the need for deterrence, winning wars and the economies of buying things in volume. He won the Cold War with his pro-military common sense and leadership. In retrospect, if the USA had had a president as bad as Obama during the Cold War, we’d likely all be speaking Russian by now.

Thankfully, the American people just elected Donald Trump as the new president, who has promised to rebuild the US military which has been enfeebled and worked to the point of exhaustion under Obama. I believe that the USA will soon again have adult management in the White House. Once Trump becomes president, I think he will make good on his promise to rebuild the US military. I’d also bet that these new warships will be given ammo for their guns.

Thanks to a reader for sending me one of these links.