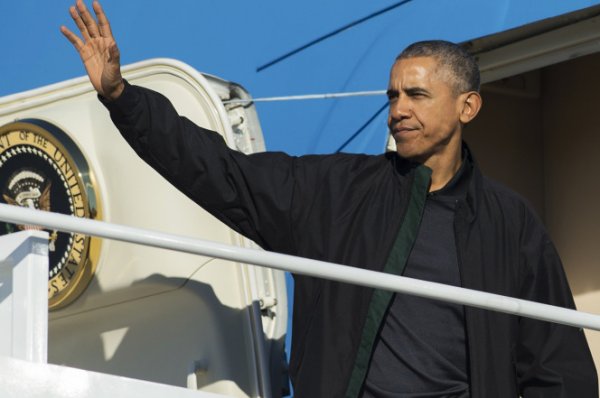 Today I watched on FOX News an interview with a New York Post columnist, Michael Goodwin, who wrote a scathing piece about President Obama’s non-functioning on the growing crisis posed by ISIS and Islamic terrorism around the world. For readers who did not see this interview or read his column, this is a “must” piece of information to have.

In his column (first link), Mr. Goodwin calls on Obama to either “lead or resign” on the critical need to take decisive action vs. ISIS. He points out the US is the world’s superpower, and its president must lead on the matter. However, he states the obvious: that there is a “distressing doubt about whether [Obama] gets it.” In addressing Obama’s apparent disconnection from global realities, Mr. Goodwin adds “…Obama has spent the last seven years trying to avoid the world as it is,” and “refuses to say ‘Islamic terrorism.'” Mr. Goodwin is scathing in denouncing the failures of Obama’s foreign policies, and asserts (quite rightly in my view); “Paris is the last straw. Obama’s exemption from reality has expired. He must either commit to leading the free world to victory or step aside so someone else can (Emphasis added).” While not in the first link which contains his column, Mr. Goodwin made a truly remarkable acknowledgement during his FOX News interview. In it, he stated that there are: “…so many people who just believe the president is trying to destroy America.” I happened to be recording the program at the time so I was able to replay it to be sure I quoted him correctly. While he disassociated himself from that belief, it is remarkable that he acknowledged that “many” people do believe Obama is trying to destroy America during his term as president. This is the first time I’ve heard this belief acknowledged on a much-watched national TV program.

In the second link, also from the New York Post, another columnist, Andrea Peyser, added additional scathing observations about Obama’s poor performance as president. She also notes the striking failure of Obama to call the terrorists what they are: “Islamic terrorists.” She adds that she watched the Democratic debate where Hillary Clinton and her two rivals also all refused to use the real-world, reality label: “Islamic terrorists.” Disgusted at the persistent refusal of Obama, Clinton and the Democratic contenders to face reality, she sarcastically wrote that “she switched [from the Democratic debate] to the Sci-Fi channel to get a bigger dose of reality.”

The third link addresses what is becoming a heated issue in the USA, especially after the Paris terrorist attacks. Obama has a plan to bring 10,000 (or more) Syrian refugees to the USA. Really? Again, the question presents itself: Does Obama really live in the same reality the rest of us do? After ISIS has claimed that it has embedded thousands of terrorists among the Syrian (and other Islamic) refugees, and after it has now been reported that at least one of the terrorists who attacked Paris was a Syrian refugee who entered Europe hidden among other Islamic refugees, why in the name of sanity would Obama want to facilitate the entry of more ISIS terrorists into the USA? Mr. Goodwin, of the New York Post, added in his FOX News TV interview that ISIS has been quoted as saying “American blood tastes best.” After what happened in Paris where ISIS tasted French blood, how can Obama not see that bringing Syrian refugees to America is a really, really bad and dangerous idea?

The ISIS threat already exists in America. Obama’s own FBI Director states that his agency is already investigating 900 suspected cases of ISIS-related sympathizers in the USA (fourth link). Voices in Congress and many Governors are essentially saying “Hell No!” to Obama’s plan to bring 10,000 or more Syrian refugees to America. The last link reports that 16 governors have declared they will not take any of the Syrian refugees and it has been reported in the media that there is action in Congress to prevent any funding for Obama’s bizarre (and apparently unilateral) plan to bring Syrian refugees to the USA. We have learned from the Republican presidential debates that there are between 11-13 million illegal aliens already in the USA! Why would Obama want to bring in a mass of Syrian refugees which will almost certainly include some ISIS terrorists? Doesn’t he care about the national security of the USA? Whose side is Obama on?

In light of Mr. Goodwin’s call for Obama to step aside if he can’t lead a war vs. Islamic terrorists, I read a portion of the US Constitution today. Article 2, Section 4 states that the US Congress shall have power to impeach presidents or any other federal officials for “…treason, Bribery, or other high Crimes and Misdemeanors.” Article 3, Section 3 defines treason against the United States as “…adhering to their Enemies [by] giving them Aid and Comfort.” Hmm. Iran calls the USA “the Great Satan,” committed an act of war vs. the USA by seizing our embassy years ago, has leaders and citizens who periodically chant “Death to the USA,” and openly declares it wants to wipe a US ally “off the map” as it develops nuclear facilities to make nuclear weaponry. I think that makes Iran an “Enemy” of the United States. Obama negotiated a deal with Iran that will give Iran over $100 billion to pursue its terrorist and anti-American, anti-western agenda and build up its military forces to threaten the USA and its allies. Why isn’t this Iranian deal made by Obama seen as “giving…. Aid and Comfort” to an enemy of the United States? That is, after all, the Constitutional definition of treason.

Isaiah 1-4 is a prophecy about the decay of nations that forsake and disobey God. I recommend it to you for your reading. One of the curses pronounced on nations that forget and disobey God is that their leaders will act like “children” and “babes” (Isaiah 3:4) and that good leadership will be taken away from such nations (Isaiah 3:1-5). I suggest you read Isaiah 1-4 and ask yourself if that prophecy describes modern America. I think it does.