Norway Fears Sweden May Disintegrate Due to Islamic Immigration 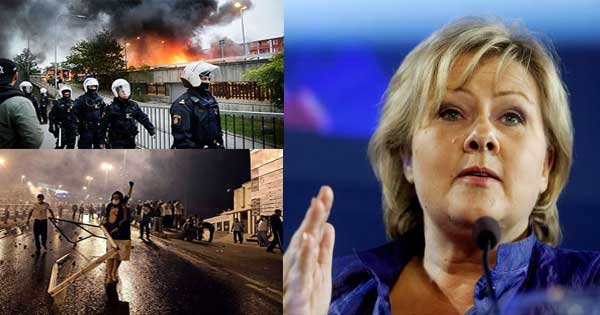 The crisis in Europe due to the continuing invasion of Islamic immigrants is reaching a boiling point. For the first time, one European nation is openly expressing its fears a neighboring nation may collapse under the weight of Islamic immigrants and it is taking steps to make sure the chaos does not imperil its own survival. Norway has taken an unprecedented step. It is openly declaring its fear that Sweden may collapse as a nation due to the tidal wave of Islamic immigrants that have filled Sweden, and Norway is taking exceptional measures to make sure the possible chaos in Sweden does not flow over into Norway (first link).

Norway is close to implementing emergency legislation to empower the Norwegian government to close all borders with Sweden and use force to stop Swedish refugees from entering Norway in the event the chaos inside Sweden becomes untenable. This is a “force majeure” action intended to override international laws as Norway feels compelled to take such action to ensure its own survival. The Norwegian Parliament is expected to pass these emergency measures. Norway is already seeing the internal damage being done by waves of Islamic immigrants that are already inside Norway. The second link reports on the growing dangers of clashes breaking out inside Norway between Islamist immigrant gangs and pro-Norwegian defense groups that are springing up to defend Norwegians and Norwegian culture in reaction to the Islamist threat.

The final link strikes me as bizarre. It reports that the Norwegian government recently disarmed its police forces so they can’t carry firearms on their persons but must store them in their vehicles. This seems utterly contrary to Norway’s imminent emergency national protection measures. The threat of Islamist violence breaking out inside Norway is growing, as the second link documents. So why would the Norwegian police be rendered unarmed at a time when there has never been a greater need for them to be armed?

I wanted to bring this matter to readers’ attention as soon as possible as this represents a new level of the real dangers now spreading throughout Europe due to the invasion of Islamic immigrants who cannot or will not assimilate into their “host” nations. I’ll be following this matter closely, and urge all readers to do the same. The real fissures building up inside the EU are, in my opinion, much worse than the EU or the mass media would want us to realize.