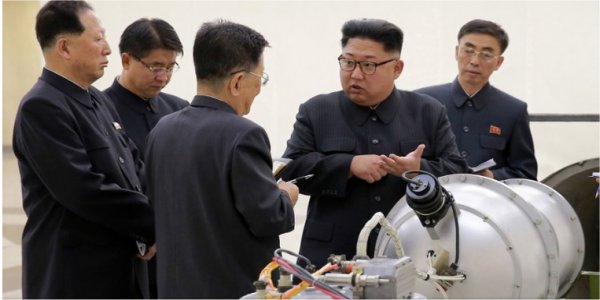 The crisis with North Korea is steadily getting worse. North Korea is now threatening to launch a missile into the Pacific Ocean region and detonate a hydrogen bomb at some unspecified destination (first link). The Pacific Ocean is a very large region, but a hydrogen bomb detonation over its territory will certainly have very harmful effects on nations and peoples if it is detonated in the atmosphere as an EMP bomb. Such a powerful blast would immediately “fry” the electric and electronic systems of any nation, island or ship in the large region affected by such a large nuclear  blast. It could also “fry” the electronic components of all passenger aircraft flying over the Pacific region in the area of the blast. Think of the horror of being on a passenger jet when such a blast goes off and your plane loses all control and you fly downward into the Pacific Ocean and …die. That is the kind of tragedy that could happen if North Korea detonates an H-bomb in the atmosphere somewhere over the Pacific region without any warning to anyone or to the commercial air travel networks.

Where else might a North Korean H-bomb be detonated? Near Hawaii so it takes out the electric grid of that state? Or will it be detonated near Guam–attempting to “fry” the electric components on that US military base so its military systems and platforms become useless? Maybe they will deliberately detonate it in a region of ocean near enough to attempt to “fry” the electronic circuitry on a US aircraft carrier group. China may even secretly help North Korea determine an area where they could detonate the H-bomb so they (and the world) can see if an EMP blast will disable US Navy ships or whether the US has really succeeded in making its military systems EMP-proof. We may soon have an answer to that question.

If North Korea surprises everyone by detonating an H-bomb over the US mainland, it will devastate the USA and “end life as we have known it” in the region of the USA which has all its electronic systems permanently “fried.” The US Congress has been warned that such an EMP blast could kill 90% of Americans in the affected region because our modern lifestyles make us so utterly dependent on electricity (second link).

North Korea has shocked the intelligence communities of the world by developing such advanced nuclear and missile technology so quickly. How can a backward nation which cannot even supply electricity to its people or feed them develop such military capabilities so fast? I believe there is an obvious answer. The third link details the close cooperation on military technology between Iran and North Korea, and the fourth link shows how many links there are on the Internet which document this relationship between the two rogue nations. The nuclear “agreement” that President Obama negotiated between Iran and the rest of the western world represented at the talks gave Iran $130,000,000,000 to spend on whatever it wants to do or obtain. How much of that money has funded North Korea’s rapid advance in nuclear and missile technology? That “Agreement” allowed for some inspections on Iranian soil, but I’ll bet Iran has evaded the agreement’s limitations on Iran’s nuclear program by simply moving its nuclear development programs to its ally, North Korea. If North Korea detonates an H-bomb over the Pacific Ocean and causes deaths in a number of island nations, ships at sea, aircraft in the air, etc., their deaths may be the responsibility of Iran as well as North Korea, and, indirectly, responsibility for it will also be on President Obama due to his bizarre agreement with Iran that enabled it to vastly and quickly increase its military funding. If such an EMP blast occurs over the US mainland, it will end the USA as we have known it.

This grave threat is very real. Continuing fruitless negotiations and diplomatic efforts only play into the hands of North Korea and Iran by giving them more time to rush their nukes and ICBMs to completion before the USA, Japan and South Korea act to stop them. The USA does not have the luxury of waiting much longer before it acts militarily to stop this grave danger to the USA and its population. If, God forbid, a North Korean nuclear weapon detonates over the USA and President Trump knows Iran is partially responsible for it, then he should authorize nuclear strikes not only on North Korean targets but on such “addresses” as Tehran and many other Iranian targets. How can Iran seriously think its role in helping North Korea to attack the USA (the “Great Satan” in Iranian terms) will go unnoticed? I don’t think it will come to such an outcome, but such a catastrophic outcome for a number of nations is possible. The chance of a catastrophic outcome to this crisis grows the longer the USA waits to conduct a necessary preemptive strike on North Korea to stop it from developing, launching or maintaining any nuclear weapons with which it can threaten other nations.

Israel is watching this crisis as well. If the Internet is full of reports about Iranian-North Korean nuclear and missile technology cooperation, you can be sure the Israeli government knows about it. Indeed, I’m sure that they know far more than we will read on open Internet links. If the North Koreans demonstrate they have H-bombs and the missiles to deliver them to long distances, the Israelis will realize North Korea will be sharing that same nuclear and missile technology with Iran, and Iran wants to “wipe Israel (the “little Satan” in Iranian terms) off the map.” If North Korea and Iran are secretly sharing all their combined nuclear and missiles technologies, how much longer dare Israel wait to strike Iran’s nuclear and missile launch facilitates to stop Iran from accomplishing its goal of visiting a new Holocaust on the Jewish people?

We are now in a very grave crisis. The USA and its allies must either attack North Korea to stop its mad nuclear attack schemes or they will be, themselves, eventually attacked by North Korea.

The world is becoming a very perilous place, just as the Apostle Paul foretold would occur in the latter days of our age (II Timothy 3:1). North Korea is generating plenty of “rumors of wars” and a real war seems in the offing. This was also prophesied to occur in the latter days (Matthew 24:6). There is a prophecy/blessing that God placed on the tribes of Israel as part of their “birthright” blessings which is rarely cited. This prophecy/blessing upon “Jacob” (also called “Israel”) is found in Jeremiah 51:19-20. It states: “The portion of Jacob…[Israel] is the rod of his inheritance: the Lord of Hosts is his name. You are my battleaxe and weapons of war: for with you will I break in pieces the nations, and with you will I destroy kingdoms (emphasis added).”  the word “inheritance” applies to the biblical birthright promise inherited by the tribes of Israel via Abraham, Isaac and Jacob. I think many readers of this blog realize that my books offer abundant documentation from both the Bible and secular history that the modern nations of the USA, the UK, Australia, New Zealand, Canada, many European nations, etc. are the scattered ten tribes of Israel in the modern world. The Israelis/Jews are the tribe of Judah. These ten tribes of Israel tribes did not disappear. Hosea 1:10 prophesied God would vastly increase their populations after they went into exile, and Genesis 49 and Revelation 7 prophesy they will be present among the nations in the latter days of our age. When one realize the ten tribes of Israel over the millennia became the Carthaginians, the Parthians, the Scythians, the Celts, the Goths, Anglo-Saxons, Germans, Vandals, etc. (as well as the  modern western nations descended from these migrating groups), one can grasp how many nations and kingdoms have been crushed by the ten tribes of Israel over the millennia in battles and wars. For example, it was the ten tribes of Israel, migrating in their millions out of Asia into Europe which destroyed and defeated the Roman Empire. The British Empire was mostly ruled by just one tribe of Israel: Ephraim. The USA, the Anglo-Saxon “brother” nation of the British people, became the dominant global power after World War II. The British and Americans fulfilled the “birthright” promise of being a large grouping of nations and one single nation that would become great in the latter days (Genesis 48:8-49:1). The proof is found in my books. You can order printed books at my website’s homepage as well as my E-book on the topic.

The world is blind to the divine script that is being acted out by the nations according to the prophesied will of God. You do not have to be blind. You can see and understand that “script” by reading my books and articles, listening to the free audio messages at my website, or listening to some of the radio interviews I have done over the years via such global outlets as TruNews and Israel National Radio. I suggest you also read my articles, Are We Living in the Biblical Latter Days? and The USA in Bible Prophecy.

Consider the consequences of a possible North Korean EMP attack upon the USA. If they detonate an H-bomb over the Pacific Ocean somewhere, electricity on Hawaii, Guam or Alaska could be eliminated or damaged. I do not think President Trump and our allies can wait much longer to give the green light to a preemptive strike to end this existential threat from North Korea. The USA is about to go into its winter season. A North Korean EMP strike would do the greatest damage if it occurred in the winter as everyone is dependent on electricity to run their furnaces. Can you survive the coming winter without any electricity and without any organized food delivery system to keep your grocery stores supplied? I also suggest you read my article, Should Christians Prepare for Future Hard Times?

I think we are about out of time for diplomacy to solve the North Korean crisis. It is time for the USA to become the “battle axe” it was prophesied in Jeremiah 51:19-20 to become.