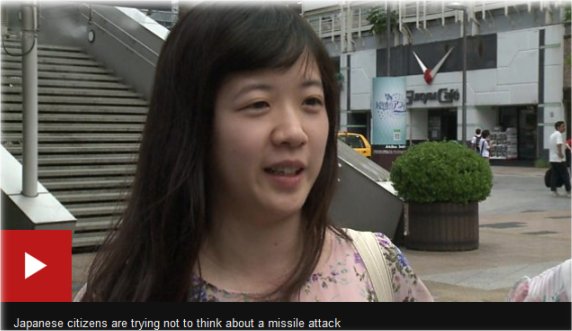 As many readers realize, North Korea fired a ballistic missile that landed in the Pacific Ocean after flying over the northernmost of the Japanese home islands (first link). In most situations, when a hostile nation overflies another nation’s territory with a ballistic missile, it could be seen as an act of war. What is even more likely to provoke a war, however, is North Korea’s bellicose warning that this ICBM flight was just the “first step in [a] Pacific Operation,” and it repeated its plans to launch missiles toward Guam, a US territory in the Pacific Ocean (second link).

When North Korea’s ballistic missile was fired over Japan’s homeland, Japan warned its northern citizens to take cover (third link). This has made the threat of a ballistic missile attack by North Korea vs. Japan as a very real danger. I watch Japan’s English-language NHK news on a local PBS channel, and find it a very valuable perspective on Asian matters. I happened to watch the NHK broadcast that was interrupted at the moment that the North Korean missile was launched toward Japan, and I saw the regular programming being replaced by a Japanese-language screen on a black background that the program’s hosts explained was a missile warning announcement. The fourth link also relates the details of this warning message to Japanese citizens. Japan’s traditional pacifist citizens are understandably becoming more pro-military as a result of North Korean threats (fifth link), and a continuation of North Korea’s nuclear threats to the USA, Japan and South Korea could force Japan into swiftly becoming a nuclear-armed nation. The fear of that happening may be the only possible reason that would induce China to intervening inside North Korea to stop the North Korean nuclear/missile programs, but such a Chinese raid into North Korea is unlikely.

How would you feel if your TV program was interrupted by a warning that a ballistic missile was flying toward where you live? If North Korea continues to develop its warlike programs, residents of parts of the USA may eventually be given such a notice. When/if North Korea launches a missile or salvo of ICBMs toward the American mainland, it is pretty certain they will not have conventional warheads. That is how dangerous this is becoming.

The sixth link cites US President Donald Trump’s response to this latest North Korean provocation by stating that “all options are on the table.” Since all diplomatic and economic sanctions pressures to date have been tried without any avail, President Trump can only be referring to the possibility of military action against North Korea. Indeed, former US Ambassador to the UN, John Bolton warned in that same link that “military action might be the only option as the world runs ‘out of time’ with North Korea” (seventh link). The link also cites President Trump as asserting: “talking isn’t the answer.” This certainly sounds like a military strike on North Korea is drawing near. If it occurs, I expect that Japan will join such a preemptive strike. South Korea may wait and put its military on alert to see if North Korea attacks South Korea with an artillery barrage on Seoul. If this happens, then all will see that North Korea is the obvious aggressor in any war on the Korean peninsula.

President Trump cannot wait until North Korea fires ICBMs with nuclear warheads at the US mainland (or at Hawaii and Alaska). If a salvo of such nuclear-tipped ICBMs are fired at the USA, massive numbers of American deaths are likely as the USA could lose one or more cities. Any responsible Commander-in-Chief has to act before those missiles get fired at the American nation. I am personally hoping that President Trump doesn’t wait too long. The consequences of acting too early are minimal compared to the risks of waiting too long to take military action.

As North Korea races to equip its ICBMs with nuclear warheads, it is possible that American readers of this post may share the experience that the residents of Hokkaido in Japan recently experienced: a sudden announcement that a ballistic missile is heading toward your area. If North Korea fires missiles at the USA, it won’t be to overfly the USA. It will be either to take out American cities or to take out the entire American nation with EMP-causing nuclear blasts in America’s skies.

While I have often written about the Biblically-prophesied World War III that is detailed to a considerable degree in Ezekiel 38-39, that prophecy does not preclude smaller regional wars between the “Gog-Magog” alliance and the Western alliance headed by the modern nations of the ten tribes of “Israel.” While “Israel” is mentioned in Ezekiel 38-39 repeatedly, the term “Judah” (the Israelis/Jews) is nowhere to be found in this prophecy. The reason why Judah is nowhere mentioned in Ezekiel 38-39 is because the Israelis are not the target of the specific Gog-Magog attack foretold in that prophecy. The modern nations of the ten tribes of Israel are all members of the Western world and most are in NATO. My books (available at the home page of this website) trace the ten tribes of Israel throughout all phases of their history, and reveals which world empires they founded and controlled after their exile as well as where they are located on today’s world map. I strongly urge you to order them if you have not done so. What is happening in the world will make far more sense to you once you realize where the ten tribes are located today and what the Bible reveals about the events just ahead of us in our future years. If you do not wish to order the 4-book comprehensive set on Israelite history, you can order the E-book, The “Lost” Ten Tribes of Israel…Found! for just $12.99. You can also gain much biblical information by reading my articles, What Ezekiel 38-39 Reveal about a Future World War III and The USA in Bible Prophecy, and Are We Living in the Biblical Latter Days?

The Bible’s prophecies are so accurate that only a Divine Creator God could have inspired them millennia ago. He challenges mankind to see his ability to bring to pass ancient biblical prophecies as proof of his reality and sovereignty (Isaiah 41:21-26, 46:9-11). While many details regarding how biblical prophecies will be fulfilled remain to be seen, God really has, in his biblical prophecies, revealed to us an overall “script” that modern nations will unwittingly fulfill as he guides them to implement his prophecies in the future. It behooves everyone to know what that “script” is.