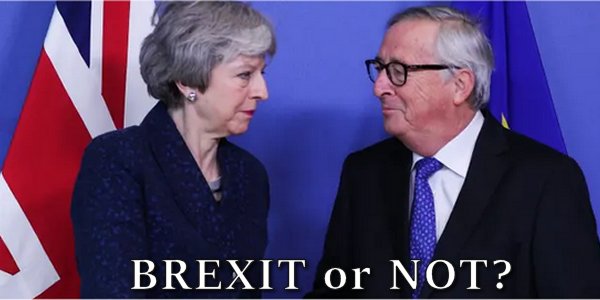 Political conditions inside the EU are continuing to deteriorate, and another major internal EU crisis is drawing near. Let’s examine the Brexit status first. British PM Teresa May keeps heading to Brussels to try and obtain a new Brexit deal, even though numerous statements from EU leaders have emphatically repeated that no new deal will be negotiated. The first link reports that May’s latest flight to Brussels indicates she is hoping she can re-negotiate the deal with “binding changes.” On the other hand, EU Chairman Donald Tusk has reportedly “abandoned hope that [a hard] Brexit might be stopped (second link).” The third link adds another perspective on this impasse. The “negotiations” between May and the EU leaders regarding Brexit are becoming a “dialogue of the deaf” in which neither side is facing the reality of what is about to occur. The “backstop” issue is just one of a variety of issues standing in the way of any new deal being made. One fact needs to be stressed. If the EU offers May any “understandings” or “clarifications” that are not actually a part of the formal Brexit deal text, then any such offers are not worth the paper they are printed on as they have no legal, binding force.

It seems to me that it is time both sides face reality and make plans on how to facilitate trade, transportation and communication issues after a hard Brexit occurs on March 29th. A recent post I wrote cited common-sense measures which were already being prepared by the EU, but these measures were based on the British agreeing to reciprocity in such matters. In my opinion, the British government ought to work out such transitional agreements with the EU so they are in place before March 29th. Also, a Hard Brexit is being spoken of as if it is the end of the world somehow concerning trade between the UK and the EU nations. That worry is nonsense. Consider this list of nations: the USA, Canada, Australia, Russia, China, New Zealand, South Africa, Japan, Indonesia, etc. What does this list of nations have in common? None of them are members of the EU. Are they all able to conduct trade deals and financial transactions smoothly with the EU nations? The answer is an obvious “yes.” Therefore, it is extremely obvious that no nation needs to be in the EU to have stable trade and financial relationships with EU nations. If those other major nations can all have good trading relationships with the EU nations without being a member of the EU, then the UK can do so as well.

The fourth link notes a series of effects that a Hard Brexit could cause. One of these effects would be very beneficial for the United Kingdom and a major challenge for the EU. It notes that a Hard Brexit means that the $39 billion “Divorce Bill” contained in the tentative deal would not have to be paid by the UK to the EU. The fifth link details that in 2016, the UK contributed 13.45% of all the funds given to the EU bureaucracy by member nations. A Hard Brexit means the EU may have to make large cuts in many of its programs and lay off a large portion of its bureaucrats because if the House of Commons refuses to appropriate any money to the EU in a Divorce Bill, then the EU will receive nothing. That the EU knows this and is still refusing to negotiate a new Brexit deal that would be acceptable to the UK leaves us with one so-far unstated conclusion: that the EU actually wants the UK to leave the EU. Why would that be the case? There is an easy answer and that is found in the remainder of this post.

This Spring, the EU Parliament will hold elections in its member states, and the surging nationalist, anti-immigration, Euro-skeptic parties in many EU nations are in the process of building an alliance to elect large numbers of Euro-skeptics/nationalists to the EU parliament. Needless to say, the EU leaders find such an idea to be anathema to them, and they are doing whatever they can to blunt these efforts of the Euro-skeptic nationalists. The nationalists already have taken control of European governments in Italy, Austria, Hungary, Poland, and are powerful in the Czech Republic and Slovakia which together with Poland and Hungary are often referred to as the rather anti-EU “Visegrad Four.” Anti-EU nationalists are the second largest parties in France and the Netherlands. Greece, which had very painful austerity measures imposed on it by the German-led EU, has many people who are deeply resentful of the EU. Germany and Sweden saw the election of significant numbers of Euro-skeptic nationalists to their parliaments in their most-recent national elections–making it very difficult for the globalist/establishment parties to form coalition governments. The sixth link describes many of the Euro-skeptic movements that are now active within the EU nations. Knowing that they already face a major wave of nationalist, anti-EU parties cooperating to elect large blocs within the EU parliament, the EU leaders may actually want the UK out of the EU so the UK’s large Euroskeptic population cannot elect any representatives to the EU parliament.

There is still a slight possibility that the EU leaders may “cave” and negotiate a new binding agreement more acceptable to the British House of Commons, but if this does not happen, it is evident that new post-Brexit trade arrangements will be made swiftly.  The seventh link reports that German car makers want an orderly way to export cars to the UK if a Hard Brexit occurs and the eighth link reports that Dutch onion growers are fearful their crops will rot unless they can quickly export their perishable produce to English buyers. With German industrialists allied to Europe’s agricultural sector demanding unfettered access to British markets after a Brexit occurs, you can be sure that such an agreement will be worked out quickly. The EU leaders will not want these key segments of the EU economy uniting in anger at the EU leaders in Brussels.

In a move that has not occurred since the end of World War II, the French have withdrawn their ambassador to Italy to protest an Italian government official meeting with a leader of French’s rebellious “yellow vest” movement.  The French government sees this at the very least an effort to ally the yellow-vest French protesters to the nationalist/Euro-skeptic bloc in the pending EU elections, but possibly even an effort in cooperating to topple Macron from power in France. France sees this as Italy “meddling” in French internal matters while Italy sees it as merely as an effort to forge political links with like-minded French voters to make common cause in the pending EU elections. The ninth link, tenth link and eleventh link offer useful perspectives to readers in understanding what a remarkable breach is occurring between these two large European nations. The internal stresses erupting within the EU nations are steadily getting more dangerous. I watched an American PBS program this week which ran a segment from European media that almost 2,000 members of the yellow-vest protesters in France have been injured, sometimes seriously by rubber bullets, flash-bangs and other riot-control weaponry fired by French police. Likewise, French police claimed over 1,000 of their members have been injured in clashes with yellow-vest protesters. In an environment where these confrontations within France have already become violent, it would only take a large enough spark to erupt into internal national conflict. It is likely that Macron, the globalist leader of France whose poll numbers are abysmally low, could not win an election if one were held in France today.

In conclusion, the stresses and fractures within the EU are building toward a breaking point. At some point, a major schism within the EU’s member nations into new blocs will become inevitable. The EU, as we know it now, may not last too much longer. While Europe’s nations would still be united militarily via NATO, a bitter split within the EU could endanger even that alliance. While Germany’s Merkel, France’s Macron and the EU leaders talk about an EU army and a future EU “empire,” the foundations of this globalist body are starting to crumble beneath them. As long-time readers of this blog know, I follow developing trends and geopolitical events via a biblical prophetic perspective, but I do not predict dates for the fulfillment of these prophesied events. However, given the growing forces of revolt against the globalist elites within Europe and given the revolts against globalist elites in the rest of the world (as seen in the elections of Donald Trump and Jair Bolsonaro to govern the USA and Brazil), we may be seeing the beginning of the end for the globalist elites called “Babylon the Great” in the biblical prophesies of Revelation 13, 17 and 18. If the EU breaks apart, it will threaten the reliability of financial/banking transactions within the entire Eurozone and in the rest of the world. At some point, a global crisis is prophesied to cause the sudden collapse of the current global monetary /financial system. We need to keep watching what happens inside Europe very closely.

For an in-depth examination of how biblical prophecies apply to modern global geopolitics, please read my free articles, Are We Living in the Biblical Latter Days?, The Babylonian Origin of the Modern Banking System and Is Babylon the Great about to Fall…Ushering in a New Best System? If you do, you will see just how accurate the Bible has been at predicting events and trends in the modern world.