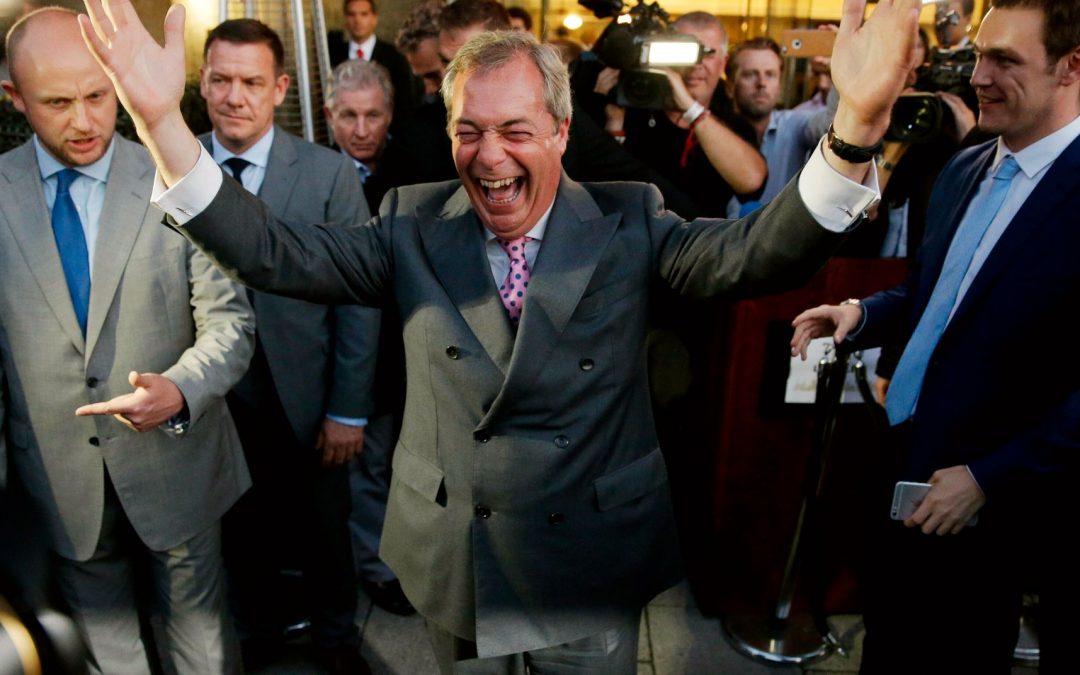 Nigel Farage, one of the key leaders of the British Brexit process which resulted in the United Kingdom leaving the EU, has predicted that the British Brexit from the EU has triggered a process which will result in the collapse of the EU within ten years (first link). He suggests that Italy, Poland and Denmark may be the next in line to leave. Given how often Poland is joined by Hungary in opposing the Brussels bureaucrats, I’d add Hungary to that list as well. The fact that the post-Brexit UK has not collapsed and that things are rather manageable in the EU-UK relationship post Brexit makes it more likely other nations will see leaving the EU as more advantageous than staying in it.

One factor that argues the EU could collapse is that its founders made sure that the common people had no real power within the EU. The citizens of the EU nations have no direct vote over any of the EU’s top leaders, and that is exactly how Europe’s insider autocracy wanted it. The insiders wanted a union where only they would determine the leadership of the EU, and that is what they have. However, the lack of any real electoral credibility by the EU’s leaders means the citizens will increasingly feel no personal stake in the EU and that the EU’s leaders will feel no obligation or accountability to the citizenry. Also, the EU is so heavily dominated by Germany that one could wonder who actually won World War II by looking at the EU’s current leadership. Angela Merkel, Germany’s Chancellor, has been the dominant political force within the EU for years, and, recently, when the top EU position became vacant, one of Merkel’s own German proteges was inserted into the top EU post. Given the top-heavy German role in the EU leadership, one might be forgiven for suggesting the EU should consider “Deutschland Uber Alles” as its anthem. Then there is the issue of the armies of faceless and unelected EU bureaucrats that work in Brussels and other locations who increasingly are exerting their “authority” over the top elected political leaders in the member states. This dynamic virtually guarantees that there will eventually be national European leaders who resent the EU’s onerous bureaucracy enough to leave the EU itself.

The second link offers a commentary that Sweden might be the next logical candidate to leave the EU. Sweden and the UK were allies inside the EU bloc and both have retained their national currencies instead of adopting the Euro. It also discusses the chances of Italy, France, Spain and other nations leaving the EU. It reports that a few years ago, a poll of Swedes showed that the voters favored leaving the EU by a 36-32% margin with many Swedes undecided. It also cites a Swedish MEP as telling the European Parliament that the longer the EU tries to morph into a “United States of Europe,” the more European nations will want to leave the EU.

The former Finance Minister of Greece, Yanis Varoufakis, has formed a new political party in Greece which is Euroskeptic. He asserts that the Greek nation was plunged into a deep financial collapse in order to bail out the German and French banks (third link), and he also states his belief that “the dynamic process of [EU] disintegration has begun.” The fourth link reveals that Switzerland, which refused to join the EU, has a new president, Guy Parmelin, who has declared he may form a partnership with the UK instead of the EU. He also praised the UK’s Brexit deal with the EU. There has been speculation that in the wake of the UK’s Brexit from the EU, that Scotland may leave the United Kingdom and join the EU instead. The fifth link explains that a Scottish independence referendum cannot legally occur without the consent of British Prime Minister, Boris Johnson, and Mr. Johnson has made it clear he will not give that consent. It appears the EU cannot currently look to Scotland for any strengthening of its bloc.

I can think of three possible circumstances that could quickly dissolve the EU. The first is a sudden collapse of the Euro currency by itself or as part of a global crisis involving all fiat currencies. Since the EU is not a nation-state, if the Euro currency falls, the EU would almost certainly fall as well as nation-states would be struggling to re-establish a kind of order. If the Euro collapses, the EU bureaucrats in Brussels would almost certainly be without paychecks. The second possibility would be a major war in Eurasia. Such a large war would expose the EU as a toothless entity that cannot protect itself, much less anyone else. Such a war would make the NATO ties of all European nations paramount to the national survival of each European nation, and would make NATO ties far more important than EU ties.

The third possibility involves France. The EU orbits around a Franco-German axis. If France ever votes for a Frexit option (France leaving the EU), I cannot see the EU remaining intact. France would align itself with the United Kingdom in a new axis outside the EU and various EU member states would rather be aligned with a Franco-British alliance than remain in a dominantly-German union (World War II memories still linger in Europe). The sixth link, seventh link and eighth link offer updated appraisals of the possibility of France leaving the EU. The current front-runner in the French polls is Marine Le Pen, who in the past has been an advocate of leaving the EU. Currently, she is in favor of staying in the EU but transforming it from within to become a populist/nationalist union of nation-states instead of a union led by an oligarchy. While she currently holds a slight lead in the polls for the first-round vote in which all parties participate, she trails in the polls in which the top two candidates engage in a run-off election. However, much can change politically in all EU nations. Several national leaders could topple if the covid pandemic persists and the economies of the member nations begin to disintegrate due to harsh lock-downs.

The European continent has been the main theater of western civilization over the centuries, and most of the modern ten tribes of Israel have descendants dwelling in modern European nations, so this area of the world must remain a major focus of attention as we look for the future fulfillment of biblical prophecies. Many Christians who follow prophecy expect the “beast” and “false prophet” to arise within Europe and that is a distinct possibility, but it is not a certainty. I urge all readers to follow events in Europe closely. If the EU does collapse, we need to watch the blocs and alliances that emerge from it for possible linkages to biblical prophecies. Like you, I will be watching closely as well.

For detailed information about the migrations and modern whereabouts of the so-called “lost” ten tribes of Israel, I recommend to you my four printed books and one E-book on this topic. They contain a wealth of well-documented evidence both from secular historical sources and biblical accounts, and they can all be obtained at the home page of my website.